How does a country store buttress its first-mover advantage after 12 years?

When Matthew Mcnamara heard the news in 1999 that the cattle market in Dandenong would be shifting its operations to Pakenham, a satellite suburb in Melbourne located on the fringe of the West Gippsland region of Victoria, the enterprising young man immediately seized on the opportunity. Within months of learning about the move, Matthew and his dad had secured a block of land in the area and set up a store that supplied industrial tools and equipment to, among other trades, the farming sector… Even though the inception of Total Tools Pakenham may sound more opportunistic than fateful ambition, it doesn’t detract from its founder’s foresight and abilities. Matthew had been involved with the family retail business since day one – father Ron owns Total Tools Moorabbin, an award-winning franchise in Melbourne’s South Eastern suburb. When the store began operations 25 years ago, Matthew was still in his late teens but already cutting his teeth in retail management. By the time the opportunity came to put his own entrepreneurial skills to practice, Matthew was a bona fide retail specialist with a proven track record overseeing his father’s thriving business as operations manager.

Twelve years on, Total Tools Pakenham is still raking in the benefits for being strategically – and geographically – placed in proximity to the region’s burgeoning farm trade. Besides servicing the livestock community’s tooling needs for compressors, power tools and petrol-powered equipment, the outlet is also known in the local tradies market for its wide selection of hand and powered tools.

TTP has certainly banked on its tagline motto “Every Tool, Every Trade”, in meeting the manifold demands of its swelling pool – and database – of tradies and farmers. “It’s more than just a slogan. We are known in the market for having most of the tools in stock,” says Matthew. The motto stretches to accommodate tools that the store doesn’t carry or belong to an unfamiliar supplier. Stocking a wide variety, including all the major brands – Irwin, Sidchrome, Sutton, Bosch, Makita, TTI etc – the establishment uses Pronto, a retail management software, to keep track of them, while making automatic, daily inventory forecasts and reorders in real-time. Still, it is not uncommon for the staff to be chasing down a brand or product that a customer has requested for, that is not on the shelves.

“If we haven’t got it,” Matthew says matter-of-factly, “we’ll order it.” The managing director proudly tells us that customers are constantly amazed by the level of service rendered by his staff, testified by ‘thank you’ notes pinned all over the notice board.

“Our main focus at Total Tools has always been to offer personalized service. Unlike employees of larger retail chains, our staff members are accustomed to dealing with tradespeople – they enjoy the interaction and getting direct feedback from the customers.”

The proficient customer service at Total Tools Pakenham was recently recognized when staff member Mark Symons, won the coveted Young Retailer of the Year accolade at the Hardware Association of Victoria (HAV) awards. The store employs a motley crew of eight employees, including a former school teacher, engineer and car salesman. TTP’s hiring criteria boils down to a passion for tools exhibited by hands-on knowledge. On-and-off-the-job training chisels away the rough edges. Like Mark, the staff attend government-funded retail training and courses run by the support office, ranging from merchandising to crime prevention. Regulars at supply trade nights, which offer great networking opportunities, the boys also learn tips and tricks from the end user point of view. More specific product knowledge, they receive by attending single-day, supplier-organized workshops, which Matthew singles out as being invaluable towards upping their selling aptitude.

Crowded neighborhood
Viewed in relation to the store’s growing competition in Pakenham, Matthew’s sporadic plugging of quality service and salesmanship becomes clearer. Pakenham’s budding population of about 37,000 is well accustomed to the presence of large national retail chains. Supermarkets like Aldi and Safeway locate massive 18-aisle outlets there, while no less than three Coles stores can be found in the town center alone. At the hardware end, there are no lack of examples either – the Bunnings and Mitre 10 Mega stores immediately stand out.

Weighing in at approximately a quarter of these outlets’ average size, Total Tools Pakenham may look comparatively modest but holds its own as a growing franchisee of the tool retailer group. The “neighborhood”, Matthew says half-jokingly, is getting more crowded. When TTP entered the Pakenham market 12 years ago, Matthew recalls the other competitors were BJ Bearings, Mitre 10 and Repco. New players like Bunnings, Pakenham Bearings, Pakenham Bolts have since emerged on the scene – and they will soon be joined by Masters. Matthew has had to rely on more than the store’s charmed location or professional staff to remain competitive.

Responding to these challenges, the store owner stays on top of a visible marketing strategy to reel in the customers via print, radio and television advertising. TTP works closely with the head office and suppliers to unleash a battery of promotional tools hawking its quarterly catalogue sales. Depending on the suppliers’ season of offers, the sales event would gain traction via the distribution of the catalogue, in addition to text messages that the store sends out to remind its Insiders group of tradespeople about the promotion. Insiders is a Total Tools head office initiative that rewards members with special deals and prices. Advertising slots would be booked on WIN-TV Gippsland and STAR FM radio, local stations that serve the Victorian country region, in conjunction with the catalogue sales. Matthew says the additional publicity has not gone unnoticed, noting revenue spikes over the sales periods. Also monitored is the efficacy of the text messages, from which every purchase can be tracked with the reference number of each Insiders club member.

In between catalogue promotions, TTP would run unique radio spots to reinforce a new range or model. Marketing only specific products on these ads, which get 10 exposures per day over a month, the store is able to assess the performance of each individual campaign. While Internet promotions have been minimal, the store is currently in “development stages” of generating a larger web presence.

As 2012 draws to a close, Matthew has a new goal: Gain higher market share of the region’s industrial and trades market. “When we first opened our store in Pakenham, we wanted to capitalize on the farming market and industrial sectors. Our projections for the former had been accurate but the industrial trade did not go as expected,” he explains. Now Matthew sees another growth trend in new factory and residential projects coming to the region that will require the supply of compressors, welding machines, safety equipment, hand tools, powered tools – all falling within TTP’s range of interest. To keep up the healthy growth rate that the store has achieved this year, Matthew foresees a new wave of opportunity to arrive at Pakenham’s doorstep. “Once again, we want to be ahead of the game, and make sure our products are in front of every potential customer.” 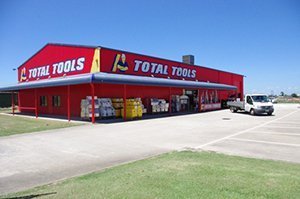