Many conclusions have been drawn from Metcash’s majority acquisition of Mitre 10, since the conglomerate that owns such household names as IGA, Autobarn, Cellarbrations and The Bottle-O, extended its tentacles into the hardware business. The deal was brokered amidst worsening trade conditions while fears of the buyout triggering a price war became fodder for industry chatter.

This was autumn of 2010, when the grocery and liquor wholesaler announced its resolve to transform the struggling business into an industry powerhouse within the next two to three years, rivaling Bunnings and soon-to-emerge Masters. Whether they deliver on that promise remains to be seen, but according to those whose businesses are directly impacted by the results, namely Mitre 10 store owners, the Metcash team is already giving its retailers a much welcomed boost.

At least that is the opinion of Frank Benton, a director of Mitre 10 Diamond Valley. In the last two years since Mitre 10 came under Metcash’s leadership, Frank observes that the iconic group’s brand recognition has been “escalating”. “Before, it was all about Bunnings, but now we’re having our turn in the spotlight as well,” the effervescent retailer says, adding that Mitre 10’s recent media tie-ups that spawned home improvement television program The Block has generated healthy buzz and business.

To be sure, Frank is not convinced solely by Metcash’s hefty fund injection, which goes a long way towards paying for media attention, but their taking a distinct interest in the stores’ well-being and success. “Every Mitre 10 store is unique and the current support team appreciates this,” Frank affirms, unavoidably drawing comparisons with the former crew. “They are more engaged with store owners. You could talk to anyone from a buyer to the head honcho, no problem at all. The support is there when you need it.” The rewards of maintaining open dialogue with retailers could be seen writ large on Mitre 10’s revitalized buying program.

“Their understanding of the market helps them warehouse a great range of products at the right prices. At the end of the day, we (the Mitre 10 store owners) are private business owners seeking to make a profit and that kind of improvement makes us more competitive.” Frank credits proactive purchasing policies and a watertight system as factors that aggregate the buying power. “In the past, Mitre 10 stores were getting a significant amount of stock from outside the group, costing head office significant revenue, while we had to pay more for the same products. The new team is doing a fantastic job buying at competitive rates. The monthly special offers are genuine.” “In short,” he openly admits, “Metcash has been a savior.” Not that Mitre 10 Diamond Valley desperately needed one. In the last five years alone, the store had amazingly doubled its turnover along vast expansions in scope and scale. From 2008 – 2012, it had been a Mitre 10 star performer, consecutively bagging the group’s store of the year accolades at different levels – state, national and association.

The business started about 30 years ago as a tin shed selling bits and pieces as well as a limited range of timber. Originally with the now defunct Home Saver buying group, it became part of the Mitre 10 assembly in 1992, around which time Frank had joined. Owing to a redevelopment project, the store underwent major changes in 2007. It moved several blocks from the original 780-sqm site to its current location, a 3.5 acre property that houses a 4500-sqm building and timber sheds occupying a total floor space of 2500 square meters. The ten million dollar plus expansion was a behemoth undertaking, yet as Frank relates, it was carried out without any support from the head office. Tacitly illustrating the way things were done pre-Metcash days, the managing director bemoans: “I was disappointed but not surprised.”

Despite the store’s re-opening just months shy of the global financial crisis, remarkably, business wasn’t in the least impacted. The local establishment continued to tap on its loyal clientele base remaining in a familiar locality, just up from its former site within the North Eastern Victorian suburb of Diamond Creek.

Since overtrade and an outgrown facility instigated the move, existing customers welcomed the larger premise and extensive inventory storage. The extension applied also to the merchandising lines, where in most cases, improvements included a bigger physical presence and one-stop product ranging.
Full-range categories

The former mini nursery, displaying a limited selection of plants, as well as garden and outdoor furniture, had become a full-blown outdoor gardening section, effectively selling everything that a horticulturist or green-fingered hobbyist would require. Populated by exquisite flora and fauna varieties, the new 800-sqm greenhouse exudes an inviting presence through which add-on sales of ancillary products – potty mixes, fertilizers, pots, fountains, hand tools and powered gardening tools – may be leveraged. Coupled with a sand and soil department, Frank remarks that his full-range gardening section allows an enthusiast “to start from an empty patch and built a garden from scratch.”

The enlarged space and supporting wares have proven to be a hit. Accounting for only two per cent of overall business prior to expansion, the greenlife and outdoor category currently represents ten per cent or five times the original portion. Not to be outdone is the store’s wide-ranging support for builders, extending from basic materials like timber to all the necessary building tools and accessories to assorted protective gear. “We basically allow tradies to build an entire house, from end to end, using the products we offer.” An enormous drive-through facility provides an undercover pick-up area for tradies, especially conducive for their timber needs. Transporting the massive logs are four forklifts and a bucket loader, in addition to a delivery fleet of six trucks. Frank avers: “Making it easy for tradies to locate all their supplies under one roof has defined the trade side of our business model.”

Compete on range and value

While timber has been an important drawing card for tradespeople, retail customers have grown into a significant group over the last five years – the customer base is split in the middle between the two groups. Tradies working on smaller scale projects, serious DIYers and home handymen still make up the bulk of walk-in customers. Thanks in part to Mitre 10’s brand association with lifestyle programs like The Block, female home improvement buyers now represent an emerging market. Frank jests: “Inspired after watching The Block, some ladies who control the purse strings have been asking their husbands to renovate the bathroom in two days, although it doesn’t quite work like that. In all seriousness though, they are the main influencers behind the decision-making process.”

In targeting this growing segment, Frank believes that deploying an experienced team on the ground to assist those embarking on more serious DIY work is paramount. “Whether you’re a newbie or experienced DIYer, our team has been trained to provide the appropriate assistance on a wide range of projects.” The same fundamentals apply when tackling the competition, which includes indirect ones from supermarket chains and $2 shops that sell competing merchandise, including car cleaning products, extension cords, light globes and even “cheap and nasty” hardware.

“Our product quality and relevant staff knowledge goes hand in hand, in creating a trusted environment in which customers are confident they will always find what they need that offers good value for money. That’s what retailers selling cheap knockoffs find hard to compete with.” Although Frank admits that the absence of big box retailers in the vicinity has helped its position as the region’s one-stop hardware destination, he believes that Mitre 10’s recent brand and business rejuvenation has played a significant role. Citing the latest e-commerce-driven “Click and Collect” marketing support as example, Frank says store owners can greatly benefit from the head office’s corporate initiatives.

“With head office taking care of the marketing responsibilities, that we may not be equipped to do ourselves, we can concentrate on what we’re good at. “If we make it a point to support their initiatives, we stand to reap the benefits in the long run.” 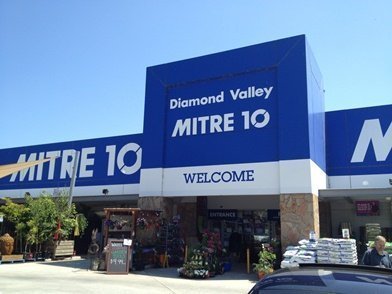