2013 is a special year for Moorabbin Paint Spot. Besides marking the 40th anniversary of the store’s life, it was 25 years ago that the current leadership had taken over the business. It holds particular significance for the store’s owners, Barry and Ken Morgan, siblings who became enterprise partners when they bought over the business from their late father, John Morgan. Having built a mini empire of five paint stores, elder Morgan decided upon his retirement in 1988 to sell off the individual outlets, three of which were purchased by his children.

Far from viewing their acquisition as perfunctory preservation of Dad’s legacy, Barry and Ken shared an ambitious goal from the start, to remodel the store into “the largest paint retail specialist in Australia”. To do that, it was clear to the boys that one of their immediate objectives was to bolster the trade end of the business, which during their father’s time had a lopsided retail-trade split at 95 to 5 per cent. Tilting the business in favor of the trade painter market, mainly to cover the renovation and light commercial segments, they figured early on that an expansion in brands and product lines was imperative:

“We were looking for a major point of difference to our competitors in this area, mostly paint specialists that run very strongly with one brand, Dulux. We deliberately chose to defy the norms of the industry in stocking as many brands as possible to offer our customers a truly one-stop shop. “We thought there was great opportunity to go forward and have a bigger base of suppliers than be aligned to any one supplier.” 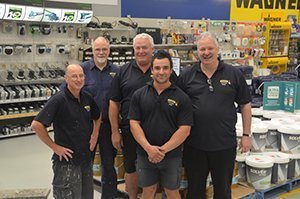 The boys’ involvement in the business harks back to 1976, the year Barry first joined the family enterprise. It may have been a totally different era and set of circumstances, but one thing hasn’t changed: The same store that opened 40 years ago, once agaTurning points

At the quarter century mark of auguring the Moorabbin outfit in a decidedly new direction, Barry is convinced as ever that their push towards trade and multi-brand expansion was an astute decision. The current trade-retail split stands at 75-25, despite retail “doing extremely well”. As for that lofty goal, Barry is convinced not only that they have achieved the brass ring, but having done so 10 years ago. Boasting an annual turnover of about $10 million and stocking easily the widest range of paint and related products in the country, Moorabbin Paint Spot has, to Barry’s best knowledge, held national nonpareil status since 2002.

Barry adds: “It took us 14 years to get to the top, but it’s been no picnic staying there. The aim was, and still is, to be the best in the industry. That comes from doing it better than anyone else and taking the lead in the industry.” Reflecting on the store’s pivotal moments that contributed to its sustained success, Barry identifies two major events as turning points: Joining Paint Spot in 1993 and moving into a larger premise in 2000.

Formerly known as Morgans Paint Moorabbin, the store changed its name when it joined the buying group in a bid to combat the growing threat from Bunnings.
“We needed a stronger marketing presence and to maximise buying power to compete with them and this has proven to be the case since we became members. We actually have three Bunnings stores within a 10-minute radius of our store.” Giving credit where it’s due, Barry admits that Bunnings is a well-run organisation despite the hardware chain taking a wheel off their retail vehicle. Compelled to turn their focus on the trade and industrial sector, Barry confides that main worries with trade lie in competition with their own suppliers.

“If you look at all the major paint companies – whether Wattyl, Haymes or Dulux – they sell to us and operate their own depots as well. Because of that, we’re bound to cross paths in the industry, finding ourselves in awkward situations where we’re dealing with the same customers as them.
“That’s just one of the little foibles of the paint industry. It’s been the case the whole time we’ve been in business, but not something I’m aware of in other industries.”

That Paint Spot group transacts on their own terms may be another cause for tension. It stands apart from other paint groups, in conducting the majority of their business on their own paperwork, while other organisations collect a commission on supplier-administered contracts.

Downplaying any politically charged sentiments, Barry sees the arrangement as purely business: “We’ve gone the other way mainly because we want control of our business and future. This allows us a greater margin, albeit with a bigger debt risk, but the model works extremely well.”

Barry took over as chairman of the Paint Spot group a year after they joined. The group was formed in 1973 when three stores united under a single banner. It has since grown to 16 stores across Melbourne and regional Victoria. Collectively, the group employs over 100 paint specialists, stocks 20 different paint brands and 40 accessories brands.

Since 2009, the group has added four more stores. The new stores have been thriving, says Barry who attributes their early successes to clever adoption of new business models that allow for better margins and improved supplier relations. Although he sees opportunities to attract a few more stores this year, the straight-shooting chairman believes the market is already saturated.

“To put a store out there, just to see if it works, costs half a million dollars,” Barry rationalizes, “And you’d have to wrestle the (market) share from someone else’s arms…we’re all holding pretty tightly to ours.

“It’s a tough market to try to enter. If I were a new kid, I wouldn’t attempt the paint market at least for another two years.” It appears the time for Moorabbin Paint Spot to undergo a major expansion may be some way off. The last one took place in 2000, when they moved operations but stayed in the same location, in the heart of Moorabbin’s industrial enclave. Taking advantage of a building extension plan, the store increased floor space from 500 sqm to 2000 sqm almost overnight. The newfound luxury of space afforded the brothers room to exponentially grow their stock range, particularly for the trade sector.

The store’s emphasis on trade paint brands is evidently strong. Carrying every major paint brand as well as specialty brands like Resene, Sikkens and Quantum, the store holds a large assortment of decorative paint products for both DIYers and trade painters alike.

Trade paints from leading brands Wattyl, Solver and Haymes have been consistently strong performers, as is the case with the market in industrial coatings, with niches in epoxy floor coatings and Rockcote render products. Wagner spray equipment, Rupes and Festo tools for the Master Painter market, further boost the array while clocking healthy sales.

Running both seasonal and regular sales events, not to mention spending “a small fortune” on marketing them, has helped generate walk-in customers and tradies alike. The store runs a series of “20 per cent off” promotions for retail customers during peak periods like Easter, Christmas and long weekends. Trade painters enjoy discounted rates from “payday” vouchers, which are given to trade painters for every purchase of 60 litres of paint. These $25 vouchers can only be used on the purchase of accessories. Further savings are available through monthly “Trade Savers” on key painting accessories, offering discounts of up to 30 per cent.

These promotions play a complementary role to the store’s existing strengths in product spread and staff expertise. The specialist outlet employs a loyal team of 26 staff with an average of 10 years’ experience that Barry believes are hard to fault in product knowledge. “We provide in-store product training for all our staff to keep them up to date with new products. Most of them are very experienced and do not require extensive training.”

Trade performance has figured dominantly in the store’s growth for a long time, until it experienced a slowdown in recent months. The last fiscal period recorded a 5 per cent drop in sales revenue, which is an anomaly for the store, having posted strong positives in the preceding 15 years. Even though the retail sector picked up considerably last year, it did little to cushion the effects of a softening trade market. Barry blames it on reduced governmental spending and a shaky economy:
“I think major investments from large companies under this federal government have declined substantially. Compounding rising costs in freight, OH&S compliance, insurance and wages, the government has curbed infrastructural spending on hospitals, roads and buildings, to the detriment of our economy.”

Barry’s store forecast for 2013 has also been adjusted in light of these observations and similar customer reports. The seasoned retail owner says he predicts several lean years ahead, pointing to a bleak economy, which he believes is two-tiered and masking an ongoing recession. “The flow-on effects are such that the bigger painting companies that normally work on the big infrastructural projects are no longer doing so, thus buying less paint from us.
“Under these economic situations, I would be satisfied with a flat result this year.”

Meanwhile, Barry and Ken are looking forward to pass the proverbial torch to the third generation. On the stresses of rolling out a succession plan, the 56-year-old, who has already taken steps to wind down his work commitments, confesses: “It’s something that worries us a fair bit. We’re hopeful but you never know.”

Ken’s 20-year-old son, Tim and Matt, Barry’s 18-year-old, have just joined the store last year. They have been entrusted to John Gale, the store manager who’s been with the company for 19 years, for supervision and running the day-to-day affairs.