Greg Hammond, from Hammond’s Hardware in Tumbarumba, says he lives in “God’s Own Country”. But he’s not relying on divine intervention to carry the store into the 21st century…

According to Greg Hammond, there has been a Hammond’s Hardware store in the main street of historic Tumbarumba since 1956, first at 31 The Parade and then at brand new premises at number 37 from 1996. 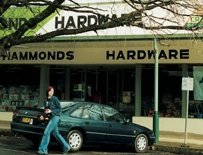 While the relocation was a significant event in the life of the business, its conversion to a Mitre 10 Handy store next month will represent an even greater episode in its history. Such large-scale changes might surprise those readers who are aware of Tumbarumba’s permanent population of just 1,500 residents, but Hammond says the business is thriving and well worth the extra investment.

“Last year we had growth of 10%, and in the previous years we’ve always had growth of 5%-8%, sometimes 10% when things have gone well,” he says. “The store now has 11 full-time employees, who work with me, my father John and wife Cheryl.”

As with many rural townships mid-way between Melbourne and Sydney, Tumbarumba features a varied and constantly changing customer base, ranging from struggling farming communities to premier Snowy River resort and holiday crowds on the other side of the mountains. There is a small tourist presence as well as a mix of young families and retirees who enjoy the safety and heritage of the locality. The retail environment has been buoyed recently by low interest rates, favourable livestock prices and the revival of the town’s timber mill, providing an extra 100 direct jobs.

Whereas some parts of NSW have been subject to severe drought, Tumbarumba has avoided the worst of the catastrophe and, according to Hammond, should be all right if significant rains arrive in September. “Overall, you’d have to say we’re in pretty good shape, and hopefully things will only improve in the near future,” he says.

With such a variable customer base and seasonal economic climate, it’s hard to conceptualise a retail store that will appeal to the broad populace, however Hammond says he has won a loyal clientele through careful marketing, free delivery services and highly tuned stock selections. 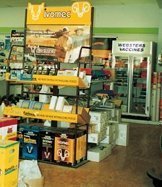 Hammonds Hardware is affiliated with both the Mitre 10 and CRT groups, and features the corporate colours of both companies on the store’s external and internal signage. Hammond says his decision to become a Handy store was based on Mitre 10’s image strength and credibility in the region, along with its powerful advertising practices.

“We thought we’d get better mileage from Mitre 10; there is a good perception of the group up here and we thought we’d get a better flow-on from advertising,” he explains. While the business was probably large enough (2,000sqm floor and 1,800sqm yard) to take the step up to a Solutions-size store, the marketing budget made Handy a more appropriate option.

Handy is also a good banner to appeal to the widest possible mix of DIYers, trade customers (only 5% of Hammonds Hardware business) and home handyman clients. “My attitude is that the switch to Handy was necessary to keep things fresh,” he says. “We would probably look at changing things every five years anyway, just in order to keep fine-tuning the way we do business.”

In many ways, it is misleading to think of Hammonds Hardware as a Tumbarumba store. It services customers as far away as Tumut 100kms to the north, Wagga Wagga 120kms to the north-west, and Albury 140kms to the south-west. There are also loyal buyers in Corryong 80kms to the south in Victoria. It’s a massive territory and one of the keys to the success of the business.

“We started offering free deliveries about seven or eight years ago,” says Hammond, “and that is really starting to have a huge impact now. We’ve got two trucks – six-tonne and two-tonne vehicles – and enough customers that we can fill a load and do several drop-offs at once. If there’s not much to deliver we take the small truck.”

The other important feature of the business is its stock selection. The Hammond family has had more than half a century to “get it right”, and they focus their attention on fencing, steel, mesh, pine posts, farming and rural products, even dog food. Hammonds Hardware is also a gas supplier and authorised Castrol oil agent.

Most clients are self-sufficient DIYers who are more than happy to build their own sheds or make fence repairs. In cases where clients need assistance from a tradesperson, the store is always able to make referrals. “With this level of service, we’ve managed to maintain 700 active accounts on our mailing list,” says Hammond. They all receive a monthly newsletter.” 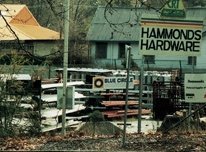 With a 30-metre frontag, Hammonds Hardware has a major retail presence in Tumbarumba

The major challenges for Hammonds Hardware, therefore, are not keeping customer loyalty or battling unreasonable competition – rather, the focus is on maximising turnover from a fairly stable customer base and obviating the effects of seasonality. “The new store layout will help a lot,” he says. “Regular customers get familiar with a store layout and don’t look beyond their favourite department. Now they’ll have to look afresh at the whole store.”

As the local community continues to thrive, sensible moves like these should help Hammonds Hardware safeguard its client base and optimise its abilities to grab new market share.

Of course, the business plan depends on plentiful rainfall from the heavens – but harsh droughts are relatively rare in God’s Own Country, and the current dry spell should have a minimal impact on the Tumbarumba region.