VEK Tools has, along with a few name changes, morphed from a single powered tools repair outfit, into a highly connected, web-savvy multi-store tools retailer

Just recently set up a fourth outlet in Preston, which also serves as a centralized repairs center, owner Kiro Athanasiadis has been transforming the fortunes of this thriving NSW-based group of stores since taking over dad’s repairs business some 18 years ago.

The company started in 1993 as VEK Electrical Service – the moniker borrowed from the Greek initials of Kiro and his parents’ names. Two years later, when a tenant vacated the shop premises at Guildford, Kiro decided to try his hand at setting up a tools store. The 18-year-old, who had spent several years learning dad’s repair trade, then renamed the business VEK Discount Power Tools. The short-lived name change, which Kiro today admits stems from a lack of understanding of the tools trade and consumer mindset, is chalked up to experience.

“I thought the name would immediately reflect affordability but instead it had a ‘cheapening’ effect. When you have to borrow money to pay off debts three months in a row, you learn pretty fast that it’s just not working.”

The business later became known as VEK Power Tools before Kiro finally settled on the more generic VEK Tools. Not simply a re-branding exercise, Kiro learnt an invaluable lesson from that episode that would influence many stocking decisions thereafter.

“We don’t go for cheap options anymore. And because we don’t compromise on that, we get respected and win referral customers from people who trust the way we do business.

“You might not have the same sales volume as if you’ve stocked with the cheapest product, but it’s usually just an initial spike that would soon decline, and that’s when the issues start to surface.” 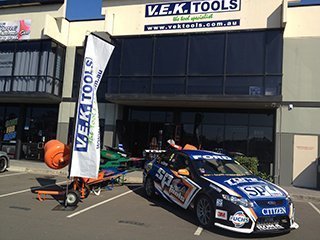 And if anyone knows about tooling issues, it’s the people at VEK. Having a solid understanding of how tools work and the ability to fix them, Kiro avers, has earned the business its stripes as a solutions-based retailer and accreditation as a warranty service agent for the likes of Bunnings and Masters. Just as important, the specialised knowledge allows Kiro to make informed purchasing decisions.

“As the preferred agent for the major retailers and brands, we know the type of tools that come back for repairs and their associated problems better than anyone else. We don’t buy on price but rather on quality and cost-effectiveness.

“Our customers are also different in that they come to us for product recommendation because they trust our knowledge and expertise.”

“If a customer is considering say a cheap brand power tool for $159, with no spares or backup warranty, we can offer that same customer a Metabo unit for $195, for example, but we’re talking an industrial grade tool with full parts warranty. That’s what we bring to the table and many people are realising the big difference they get for paying a little more.”

With the cheaper brands, Kiro explains, a two-year replacement warranty is required by law. VEK Tools, on the other hand, offer a spare parts backup of 8 years after discontinuing the product, with warranties typically varying from 1-3 years for most products, and 5 years for a Milwaukee tool. Offering that value-add service is not without its stresses, says Kiro, adding that the inventory backlog for parts and accessories is something to contend with.

“Yeah, it becomes a bit of a nightmare. When suppliers change their models, all of a sudden, the discontinued models are not coming back for repairs and you find yourself stuck with a fair bit of spares.”

In part to address the issue of overstocking spares, the company upgraded its software system from MYOB Retail Manager to SAP’s business platform. Calling the latter system the “Rolls Royce of retail software”, Kiro says he now shares the same IT platform as some of VEK’s major suppliers like DeWalt and Milwaukee. Although the January upgrade costs a whopping $150,000 – significantly affecting cash flow on a slow month – Kiro says the benefits are priceless.

For one, it has resolved the gnawing issue of overflowing spares. “Where we used to hold 10 to 20 pieces of each switch, we have now reduced to only five on an auto-ordering system – it gets down to the last one and re-orders another four.”

The efficiency of being able to have multi-store oversight and transact across stores is also a major plus point. “In the past, you would be making wild guesses or ringing up the other stores to ask whether they have a certain item in stock, causing unnecessary delays. Now it’s all showing up on screen.”

Another major investment for the company lies in online retailing. Under VEK’s online umbrella sits three websites, namely that of the main catalogues site (www.vektools.com.au), an auction site (www.toolauctions.com.au) and tool deal site (www.tooladay.com.au). The online component operates as a store unto itself, generating about 25 per cent of overall annual profits, which stands at around $2.5 million. The websites have been part of the business plan for about 7 years.

“(The websites) have been an important platform for us to grow but it hasn’t been easy. Online is not as easy as people think.”

It actually takes more time to process an online transaction than one over the counter, Kiro says, referring also to the need to install a time-consuming validation process to protect against online frauds. Even with three contracted online staff – and web overheads costing $150,000 a year – he still spends about two hours every night poring over the computer screen to make sure the websites are functioning well.

According to Kiro, the business really took off after moving to the Smithfield location in 2008. VEK Tools now locates three more branches in Narellan, McGraths Hill and Preston. The company employs between 17-20 staff depending on season, catering to a 80-20 trade/DIY split, the latter group made up of serious DIYers who are upgrading to industrial standard wares.

In a bid to strengthen the construction side of the business, VEK Tools joined the Construction Supply Specialists (CSS) buying group in 2008. The 36-year-old entrepreneur says one of the lesser known benefits of belonging to a group like CSS is having the chance to learn from more experienced retailers. Although Kiro already has 18 years of tool retailing experience below his belt, he appreciates the fraternal environment that CSS provides, from which he receives important advice.

“It’s good to get the opportunity to get things off your chest when you realize there are people in the same situation as you or are having similar issues.”

Likening CSS to a support network, Kiro says group heads Jeff Wellard and Paul Davy take a genuine interest in his business, even flying out to support him when he exhibited at the recent DesignBuild event in Sydney. The way Jeff and Paul runs the group is another reason why Kiro joined.

“(Jeff and Paul) are pretty laidback; their communication is honest and straightforward. Their agenda is about being a business partner and offering a network to grow each other’s business. 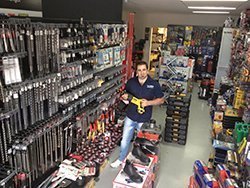 Kiro Athanasiadis shows off a section of his extensive tooling range

Last year, VEK Tools took out an expansive stand at the National Tradesman’s Expo covering 2500sqm of floor space, roughly half the expo grounds at Rose Hill Gardens. More than 300 pallets containing about $1.8 million worth of brand new stock went on a massive display as VEK Tools, for a change, played host to all the major suppliers. Costing close to $140,000 to stage the three-day event, Kiro says the mammoth undertaking was in many ways, the highlight of his career.

“It was a nerve-wrecking experience for me to stage the show,” Kiro admits, “The NTX shows in other states were organized by multiple stores out of the group, but I did mine on my own, and it was just amazing to actually pull it off.”

Commenting how he has yet to break even costs for the shows, Kiro acknowledges their value in promoting VEK Tools as a brand – many stand visitors end up being account holders or referring other businesses.

Following on the success of that event, Kiro is also excited about the complete rollout of a franchise model that has been in the works for some time. Kiro hopes to extend VEK Tool’s customer reach by offering franchise dealerships though a Mobile Tool Showroom concept, that takes the form of a VEK Tools Van. The VEK Tools group, which remains as part of the CSS group, already has a signed on franchisee for more than a year, a number set to grow by another 49 nationally, according to Kiro’s projections. “Although that (projection) won’t be (reached) for another 10-15 years, we are definitely going to push the franchise model aggressively next year through trade shows and online channels.”

Working through the online and physical stores, massive exhibitions and combined marketing efforts, Kiro continues his quest for a nationally known retail brand through the establishment of the franchise network. It may have taken him some time to recognise it at first, but Kiro has certainly come to appreciate the value of a good business name. 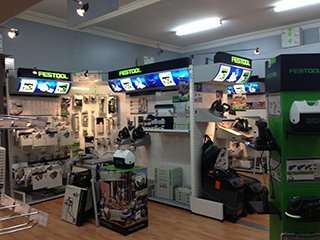