The town of Gin Gin, a short drive inland from the Central Queensland coast, is “half way to anywhere,” locals say. It’s not just midway between the key centres of Rockhampton and Brisbane, it’s also the central point to a host of natural beauty, water activities, and agricultural produce.

Paradise Dam, for example, is a Mecca for water skiers from around the country. It allows uninterrupted skis for upwards of 25km. Also close by is the Lake Monduran dam, which offers barramundi fishing that rivals some of the famed catching points in Far North Queensland and the Northern Territory. Numerous surf beaches can be accessed within an hour’s drive to the east.

But it’s not just the close to 1000 Gin Gin residents and the 5000 people across the local district, taking advantage of all this. With its key location on the Bruce Highway, the town gets plenty of travellers stopping off on their way north – for a day, a weekend or even just a few hours of refresher. Some 10,000 people drive through the town centre – past Gin Gin H Hardware among other shops – every day.

This is one of the factors behind the continuing success of the business. The town’s key supplier of tools and hardware is an award-winning store under the HBT banner. Owners Greg and Kerri Collier have run the store in the near centre of town for more than 20 years, and while not born and bred locals, are happy to have now firmly established themselves in “the best small town in Australia”. 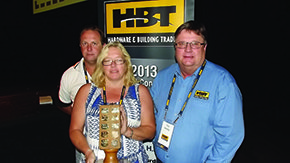 Theirs is also one of the best hardware stores in the state, at least according to buying group HBT. Gin Gin H Hardware won the Golden Brick award for the HBT best store in the country at the group’s most recent national conference in April. Both Greg and Kerri were on hand to accept the prize, which was judged on a range of criteria, including sales results and feedback from group suppliers. (Greg) Collier says the award represents the many years of hard work that has gone into the store, the dedication of his staff and loyalty of customers, but also the excellent fit that his store has with the HBT buying group.

Indeed, if HBT is a big fan of Gin Gin H Hardware, its owners are among the chief cheerleaders for the buying group itself. “It’s not a question of why would you belong to HBT,” Collier says, “HBT is the best thing to have happened to the hardware industry (so) you should be asking everyone else – why wouldn’t you belong to it.”

He cites a range of positive factors that led Gin Gin H Hardware to join the group and seemingly never look back. Among these, possibly the standout advantage is its membership cost and rebates. “The fees are a lot lower to get involved,” Collier says. “Once you are involved, the returns are far greater.”

He says Gin Gin H Hardware sends one per cent of its group purchases to the buying group administration, which he estimates leaves the store 12 to 14 per cent better off in real terms, when compared to other buying groups. Collier is also impressed with the group’s rebate system, which he says is clear, simple and free of fine print or complicated conditions. “When they say you get five per cent rebate, you get a five per cent rebate – in real money,” he says. “To me, that makes it more genuine.”

Finally, Collier says HBT offers far more consistent and effective communication between itself and its member stores. “I can call and speak to Tim (Starkey, HBT group manager) himself at any time,” he points out. “Any concerns, suggestions, or ideas for new stores or suppliers are always welcomed.”

20 years in the making

The store location on Mulgrave St, just where the highway passes through town, hasn’t always been an HBT store. It hasn’t always been a hardware business. The Colliers started the business more than 20 years ago as a second hand store. Greg had left his job after an injury and the couple went into business together, the second hand store soon morphing into a hire and rental enterprise.

“We found we couldn’t source the gear we really wanted,” Collier said, which began the store’s slow transformation into what would become a purely retail hardware operation. “We started with a few tools, then brought in a lot more.”

Now, the store maintains a deliberately diverse range, taking advantage of its regional monopoly in areas such as paint, automotive gear, and camping accessories. That advantage is particularly strong in the automotive department, with local service stations (there were as many as six operating in Gin Gin at one time, and still four servicing the passing motorist trade today) concentrating solely on petrol and roadhouse food and snacks. “If you’re in a regional area, you probably haven’t got a major auto store nearby,” he notes, leaving many from around the district to source spare parts and automotive consumables directly from Gin Gin H Hardware. The automotive department accounts for around 13 per cent of the store’s annual turnover, one of the biggest sections after general hardware. Camping equipment and accessories form another strong performing department, providing 11 per cent of the Gin Gin Hardware business.

Collier says a diverse store range also helps to keep the business in rude health at all times of the year. “Diversity is the secret to stability”, he advises, noting that the store is not subject to significant seasonal fluctuations.

Individual departments certainly have their busy times. As the weather gets cooler in the southern states, the number of tourists and travellers dropping in for camping gear and recreational equipment naturally rises. This is also the busiest time for the automotive department, with passing “grey nomad” caravaners naturally heading to the Gin Gin H Hardware store for spare parts and auto accessories.

But while tourists and truckers keep the store busy in June, July, and August, it is local gardeners that keep stock moving during the spring months. Long weekends and public holidays are great for the paint department, Collier says, while the local agriculture industry – the region is home to three of the ten biggest citrus farms in Australia – also has its busy period each spring and autumn.

Collier says that having a wide range of goods and departments is nothing unusual for a small town hardware operation, and it means the store’s seven staff (including the two owners) have to be generalist experts in order to effectively serve all types of customers. “You have to have a little knowledge of all areas,” he says. “We all need to know about all of the departments, and not be afraid to ask.”

Diversity is important, as are continual store updates and revisions. When asked about his future plans for Gin Gin H Hardware, Collier revealed a significant revamp of the paint department would be revealed in October. As well as a slightly larger and more prominent space, it will include a greater focus on paint-specific hardware, which had previously been mingled in with general hardware stock.

Collier says the gardening department is also due for an extension soon.

The store is also slowly changing its tool range, placing a higher emphasis on quality and durability in line with what Collier believes is a changing mindset among consumers. “Australians are sick of buying junk,” he says. “(So) we’re pretty happy to be turning up the heat on the quality of hand and power tools.” He says the store has just completed a deal to expand the power tool range with both Metabo and Hitachi brands to figure strongly in the new line-up that aims to favour quality and durability over the cheapest prices.

But some things in the Gin Gin H Hardware store, clearly, won’t be changing.

Even with 23 years in town, Greg and Kerri Collier aren’t yet known as bona fide Gin Gin “locals” but they say they are sticking with the town and their store for the long haul. Their three sons: Michael, 23; William, 21; and Steven, 19, do get to wear the “local” tag with honour and each play a role with the store, having learned the business inside and out over years of growing up. Michael and Steven still work with in the store regularly.

And just as the family is sticking with Gin Gin town, its relationships with HBT and its suppliers are also unlikely to sour at any stage. Collier says he loves the business and is confident it offers a valued service to all of its customers, no matter where they call home.

“We don’t do anything special,” he says. “We just try to service our community and passing trade as best we can.” 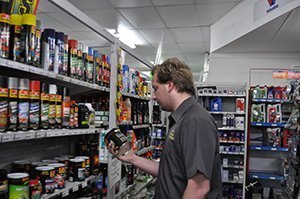