LED-based products will ultimately dominate all mainstream retail lighting channels, including Hardware. What is the state of the Australian LED market at the moment? And what can hardware retailers do to make sure they maximise sales opportunities? JOHN POWER speaks to leading LED manufacturers and suppliers about the ‘LED revolution’. 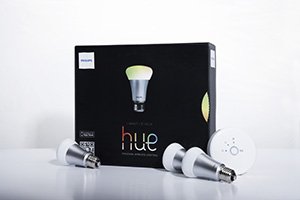 Two years ago I was fortunate to be invited on a group journalist tour of Philips Lumileds, which is Philips’ LED manufacturing facility in San Jose, California; as well as the Philips Color Kinetics lighting fixture showroom in New York.

A poignant moment of the tour occurred at the Lumileds site, just as we visitors were being handed our white, full-body, cleanroom suits, goggles, face masks and hair nets – items meant to prevent contamination of sensitive LEDs during fabrication. A technician said, ‘Of course, by 2015 we expect half of all lighting will be based on LED technologies.’

At the time this claim seemed optimistic, resulting in skeptical glances ricocheting amongst us, but it seems the prediction may be vindicated, driven mainly by North American and European markets.

Today, LED lighting is also forging ahead at breakneck speed in Australia as prices decline and ranges increase. Jon Bell, retail channel manager for Philips Lighting Australia, estimates that approximately 30%–40% of all commercial lighting sales in Australia are now LED-based, and even though LED penetration of the consumer market lags at approximately 5%–10% of the overall market, he says he anticipates an extremely sharp pick-up in domestic sales in the next three years.

Hardware retail channels in Australia are becoming increasingly important outlets for large ranges of LED lighting. However, even though consumers may have heard about the LED product category, Jon asks: “Do they really know what makes it tick, how to choose between a good globe and a bad globe? Do they understand the technology? The short answer is no.”

In this article we will examine some of the basic elements of LED technology, as well as sales trends, which retailers and their staff might find helpful when dealing with customers.

Simon Grigg, from Mort Bay Traders, which supplies LED products to retailers such as Bunnings, Danks and Masters, says the switch to LED technology is profound.

“In our light bulb range it will be 100% LED soon,” says Simon. “We’re walking away from CFL and halogen and just focusing on LED.”

“We have 1,000 products in our range, give or take,” James says. “I would say two years ago less than 3% was LED. Now, it’s probably running at 15%–20%, and I would suggest in the next 2–3 years it will be running at 60-70%. Being involved in the lighting industry for over 20 years, I would say the LED revolution is the biggest fundamental change since Thomas Edison invented the filament light bulb. Growth in LED fittings and products is logarithmic; if I look at my top sellers every week, more than half will be LED products.”

Chris Russell, national marketing manager at Crompton Lighting, another major supplier to Australian hardware retailers, says 20%–25% of the company’s 3,500 SKUs are LED based. “The LED portion of our product range is increasing so rapidly… if you were to ask in six months time our answer would probably be 40%,” Chris says. “LED is expanding literally daily – there is no area of our previous spread and range of products that we do not have an LED equivalent for. So, anything we could do originally in incandescent or halogen or CFL can now be done with an LED replacement, either as a complete luminaire or by replacing lamps.”

“The LED globe is the growth category,” says Jon Bell from Philips. “LED penetration is going to continue to rise and rise.”

Simon Grigg from Mort Bay agrees. “Growth will be in the basic light bulbs and downlight bulbs,” he says “It’s going to take most of the business from CFL. It’ll take part of the business from halogen – the 50w halogen has been outlawed, you can only have a 42w halogen now – but you can still have a 50w equivalent LED. So I think there will be strong growth in the GU10 and the GU5.3. I know there is because we have a significant range going into some majors shortly.”

Ramesha Shimoga, technical product manager at Crompton Lighting, offers an additional reason why replacement globe markets will remain healthy. Tenants in rental accommodation require special permission to install new light fittings, but they are free to retrofit replacement globes. “They can’t change the fittings so they will buy only replacement lamps,” he says.

Notwithstanding the popularity of replacement globes, there seems to be consensus among suppliers that integrated LED products will ultimately prevail in the long term. This makes perfect sense, as previous generations of fittings designed for incandescent and halogen technologies, for instance, have nothing to do with optimal designs for efficient LED lights.

“The next frontier, and this will actually replace the retrofit market, is that in the final phase everything will move to integrated luminaires,” says Jon Bell. “Because if you do any new installation, those are the products that will give you ideal system performance.”

Simon Grigg shares this assessment. “The future is integrated LED,” he says, “so we’re about to launch a new range of spotlights, which is all integrated LED.”

Similarly, Chris Russell reports good sales figures for integrated products, with an expectation that sales figures will rise sharply. As his colleague Ramesha Shimoga adds, the vast majority of integrated products are installed in new homes and major refurbishments, driven by BCA energy efficiency requirements which virtually mandate the use of state-of-the-art LED technology.

As far as retailers are concerned, it is certainly worth considering the expansion of in-store display space devoted to integrated fittings, as working models are going to be increasingly important.

In the absence of a formalised Australian Standard or assurance scheme for LED product quality or consistent labeling, there is great discretion involved in the way products are described and marketed – which is not necessarily helpful for consumers.

Energy consumption is perhaps the biggest hoary chestnut within industry circles, particularly when describing the putative performance equivalence of LED and non-LED products (such as declaring that a 7w LED globe is ‘equivalent’ to a 60w incandescent).

“If you described equivalence (i.e. an LED MR16 lamp to its halogen equivalent) from a wattage perspective, there would still be confusion because every supplier has a different interpretation of what a 50w halogen is, for example; there are lumen output variations within that range, and LEDs a no different, so you would still have issues,” Steve says, preferring the clarity of lumen-based product descriptions.

“Our European counterparts have now gone down the road of only labeling a lumen output on the package, and going away from relating ‘10w is 50w’ or vice versa.”

Nevertheless, most Australian suppliers believe that some form of equivalence terminology is necessary as a means of demystifying LED technology and contextualizing it in a familiar lighting vernacular. A compromise, Simon Grigg suggests, would be to follow European models requiring expressions of equivalence to be scientifically determined and scrutinized. “For an LED to claim it’s a 25w equivalent, it has to be by European Standards 249 lumen output,” he says. “To claim 40w equivalent it has to be 470 lumens, etc.”

Store personnel, therefore, should be ready to advise customers that equivalence claims on packages should be treated with caution if the product is unknown or if it features a ‘no name’ brand. Another danger with unproven products relates to the unscrupulous use of lumen levels, based not on the actual illumination from a complete globe or luminaire, but from the naked diode. Such descriptions exaggerate lumen capacity and output and are misleading.

Reputable manufacturers, naturally, are doing their best to assist sales by paying careful attention to the way they design both replacement and integrated products.

“If you are selling a retrofit globe, it helps if your ‘form factor’ [i.e. shape] is as close as possible to the product you’re replacing,” says Jon Bell.

In general, James Thompson adds, customers can have confidence that “you generally get what you pay for”. Furthermore, he believes high-quality suppliers will identify the source of their LED chips – prominent brands like Cree, Sharp or Citizen are well known. Finally, the best products will carry generous warranties, whereas poor-quality items will not.

Retailers should take heed of these points when customers ask about the comparatively high price points of premium LED products!

In the near future some exciting new products will be released into the market. Simon Grigg says Mort Bay will release its patented ‘Integra’ integrated downlight kits, which incorporate a driver, bulb and fitting into one product with 60%–70% faster installation times for electricians.

Brilliant Lighting has just sold a portable rechargeable LED work lamp into Mitre 10, which has been a huge success.

And Crompton Lighting, according to Ramesha Shimoga, looks forward to continued good sales of its LED downlight products. 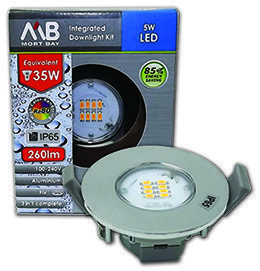 At Philips, the team is excited about its ‘hue’ personal wireless lighting (visit www.meethue.com). “You can have colour changing and you can control it wirelessly using a smart device and an app,” Jon Bell says. “It’s insane what functions we can do. In the future we believe we’ll be selling products that have tunable home lighting so you can tune the product from warm to cool colour temperatures with the ability to use colour when desired. We’ll sell them in retrofit globes, we’ll sell them in integrated luminaires, there are so many possibilities.”