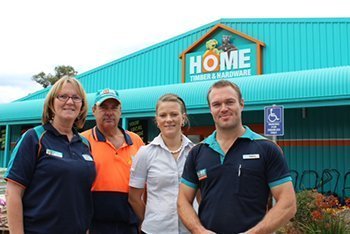 With just 14 months of trading under its belt, Scone Home Timber and Hardware is already exceeding expectations within the Danks group. Owner operator Chris Lavis says that has taken plenty of hard work, but he wouldn’t have it any other way.

Scone Home Timber and Hardware has only been in operation for 14 months, but it’s already sewn up the title of most-improved store within the Danks buying group. The fully revitalised store enjoyed a stellar turnover of $3.9 million in its first year of operation, having taken over a failed independent hardware business in the small town in New South Wales’ Hunter region, about 270km north of Sydney. Owner operator Chris Lavis says a new refit has meant more products for both the trade and retail sides of the business, while Danks’ business planning and marketing expertise have helped the store to capitalise on its natural advantages and potential. All that, plus plenty of passion and hard work, and a town that rewards loyalty with loyalty, he adds.

“It’s been a very, very busy year,” Lavis says, noting that 90-hour weeks have been commonplace. “But that’s no bad thing – this is an amazing industry to be in.”

Scone Home Timber and Hardware has a prime location on Guernsey Street, just off the New England Highway that passes through the centre of town. Its previous tenant had also supplied hardware, but with a greater focus on the trade sector. It shut up shop in June last year, leaving the town and district without a local supplier for several months. Lavis and his team moved in from October last year, with a new Home Timber and Hardware branding, and a customer-focused agenda. “(The gap) probably made customers appreciate us more,” Lavis reflects. “It would have been difficult to run their businesses without a local hardware shop.”

The Scone store is the second face of what is a fast-growing retail group in its own right. The Lavis family also runs the Branxton Thrifty Link store around an hour to the south, and has just signed a lease to open a third store in Muswellbrook between them on the New England Highway.

Chris and his parents Peter and Dawn opened the Branxton store in 2004, where Peter had previously had an earth-moving business. Two of their four children, Chris and his sister Emma (Eldridge) also have a share in each of the businesses. Chris says the family dynamics are great for business.

“We argue – for sure – but in the end we’ve all got the same interests,” he says. “We’re a very close family and have a good work ethic and a great respect for each other.”

Since taking on the Scone store, the Lavis family have opted for a different mix of trade and retail customers. Where the business preceding Scone Home Timber and Hardware had focused largely on trade clientele, Lavis says the new store has grown the total market and is fast approaching a more stable 50-50 split.

On the retail side of the equation, this has been brought about by a more thoughtful approach to store layout and stock. The initial refit in October last year increased the amount of space for stock by around 30%, allowing Lavis to build up retail focused departments such as gardening and outdoors. “We more than doubled the usable space,” he said. “We wanted to capture that spring garden and building market.”

For trade customers, Lavis adopted a partnership approach. He invited key customers in to talk about the exact needs of their businesses and brought in stock specifically to fit wherever possible. Those partnerships, particularly those with local tradesmen, are ongoing. Lavis says working in the store means he is always busy, but there’s always time for a coffee or beer with his customers to discuss potential improvements and enhancements

Lavis says none of the store’s achievements would have been possible without the Home Hardware brand and the enthusiastic assistance of the Danks team. “We honestly can’t rate them any higher,” Lavis said. As well as the clear Home branding and existing nationwide marketing strategy, Danks provided individual marketing and business planning assistance in the leadup to the Scone store’s opening, and beyond.

Lavis says that period was particularly demanding and advice and hands-on help from Danks’ management and merchandise tech team were certainly appreciated. Since then, he says the team still visit at least once a month and are always on hand via the phone or email. “They are always available and always happy to help,” he said. “They’ve genuinely got our best interests at heart.”

He says the Home Timber and Hardware brand also offers an important point of difference for the Scone store, with greater marketing presence across a wide range of potential customer touchpoints, including through strategic local area marketing. In addition, the buying group also provides access to a number of unique products that customers in the Hunter region had previously not had reasonably-priced access to. “We got some great items with the initial stock orders,” Lavis said.

Lavis admits it is always difficult to come into a new community and set up business as an outsider. But he and his family are working hard to integrate with life in Scone, both inside and outside of the hardware business. “We’ve been very well received,” he said, noting that the strategy from day one was to get genuinely involved with the local community.

That has meant direct sponsorship of the Scone Junior Rugby League, as well as participation with a range of local fundraising events, from schools and hospitals to annual charity golf days. Lavis says the store is also closely involved with the local “Men’s Shed” scheme and the Newcastle leg of the annual Variety Club “bash” (car rally).

Lavis says the community building is something that happens slowly over time, and comes naturally when you commit to the business and location. And with an 18-year lease on Scone Home Timber and Hardware’s present site, he’s confident the family will be bona fide locals before long.

The future, he says, is being measured in decades – not years or months. Asked where he hopes to be after the next 10 years and his plans are modest and still centred on the three local communities where the Lavis’ are doing business. “We’re always aiming to provide a better product and service,” he says.

“In 10 years’ time, I hope the three stores will all be trading quite strongly, and we’ll be looking for a bigger site in Branxton (that current store’s lease is due to expire in 2018). Mum and Dad will be travelling around Australia in a caravan, while the kids take care of everything here.”

With a solid work ethic, there’s no reason it won’t happen. “There are certainly no plans to sit back and relax,” Lavis adds. “We’re constantly building the business, through marketing, enhancing product lines, and customer research.” 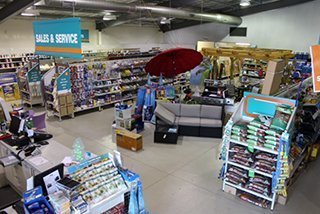