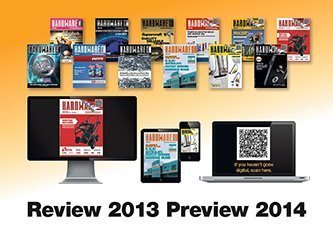 Retail Hardware and Building Supplies, as an Australian industry sector, has overtaken Retail Clothing in value, following annual growth of 2.2% in the Hardware sector in 2013–14.

Now representing close to $13 billion in annual revenue, the Hardware and Building Supplies sector enjoyed 1.3% annual growth from 2009–14, compared with Clothing’s annual contraction of 0.9% over the same five-year period.1

It’s a fascinating comparison, but what does it reveal?

Apart from reinforcing what we already know about Aussies’ fashion sense, this comparison is hugely significant as a pointer to the merits of highly diversified, multifaceted retail channels – and a warning to retailers who depend on small or demographically linear product lines.

Never has diversity been so crucial in Australia’s retail environment, following weak economic conditions over the past four years or so, as well as increasing international competition in so many markets. Online competition is another matter, which we’ll address in greater detail below.

A good indication of the consistency of Australia’s Hardware and Building Supplies sector is the performance of its largest member, Bunnings, which has had almost uniform increases in revenue and associated earnings before tax2 over the last six to seven years: when plotted on a chart, these growth rates produce a gun barrel-straight line. This is a remarkable achievement in light of the turbulence of the global financial crisis, substantial variations in the building and renovation industries, and all the other fickle behaviours that have characterised both Australian and international economies over the last half-decade.

Of course, it is hard to generalise about the wider Hardware industry, but large-format retailers and smaller operators with strong territorial markets have survived without having to dramatically overhaul basic business models. Success can be attributed to Hardware’s innate ability to stabilize itself like a ship in rough waters: i.e. if the new building market softens, the renovation sector rises to compensate; when discretionary spending in DIY wanes, the Trade sector is there to keep the ship afloat. Hardware, by virtue of its appeal to both professional and non-professional customer bases, in both large and small-expenditure sectors, always seems to find a way to weather single-sector storms.

Part of Hardware’s stability comes from its ability to react smoothly to prevailing market trends. The last year has seen subtle changes in the nature of the Australian retail market, and Hardware has responded accordingly. Indeed, specific long-term trends in Australia’s customer base have become identifiable.

In terms of the nature of Australian households, women are gaining a stronger voice as private property owners. More and more women own their own homes (61%) compared to 58% of men3, which means women are playing a stronger role than ever before as decision-making purchasers. Retailers such as Masters Home Improvement have noticed this phenomenon, clearly tailoring displays and selections to suit the female market.

Another noteworthy demographic consideration is the size of the rental market. Recent Australian Bureau of Statistics (ABS) analysis shows that a quarter of all Australian households are rented4. This is a crucial figure when we realize that Australian law forbids tenants from making substantial home improvements or alterations without the landlord’s permission. Alert hardware retailers have begun to cater to rental market customers by offering ‘portable’ or ‘reversible’ home improvement solutions, such as floor coverings, moveable storage unitts for bathroom and bedroom applications, mirrors, basic soft furnishings, freestanding lighting, etc. No doubt this market will only increase throughout 2014 and beyond as rental accommodation continues to expand as a proportion of all household tenures. Also, there has been an increase in small renovation projects compared to large ones in the last year, as might be expected in a lingeringly soft post-GFC economy, and common sense would indicate that this market will persist into 2014. Fortunately, major renovation projects and new builds are also tipped to enjoy renewed energy – at last – as glimmers of hope return to the market in the presence of continued favourable interest rates. For example, as reported by the ABC in October5, rates of apartment building nationally rose for the first time since May 2010, while house building posted its first increase in
seven months.

Perhaps the starkest change over 2013 was the industry’s increasing adoption of digital and online technologies. Sceptics remain doubtful about the Internet’s capacity to affect bricks-and-mortar sales mechanisms, but a quick search reveals at least a dozen professionally run online retail stores now catering to national hardware markets in Australia; many of these websites list thousands of product offerings. But direct sales are just one element of the digital revolution. As we reported in many articles throughout the year, suppliers and retailers are using the Internet not only as a direct online sales tool, but also as a device to influence and attract customers (both outside and inside store environments) via informative online videos or other educational materials. This ‘passive’ or indirect online marketing is helping suppliers win loyal customers, particularly in younger age groups, even if the ultimate sale occurs as a traditional in-store purchase.

Customers’ ability to use smartphones to compare prices, check user guides or gain inspiration – even while standing in front of a product display in a store – will surely lead to continued merchandising innovations throughout 2014, and possibly a preference among retailers for products that exploit online collateral material. We have already seen an explosion in the number of QR Coded products in stores (smartphones can be used to open a website link), as well as more prominent invitations to customers to check particular websites or social media pages for in-depth support information.

In the near future, online marketing may well be seen as the Internet’s most prominent application within the retail Hardware scene. An increase in direct online sales, however, can’t be too far away, and it will be fascinating to observe how the industry maintains an even keel during this transition.