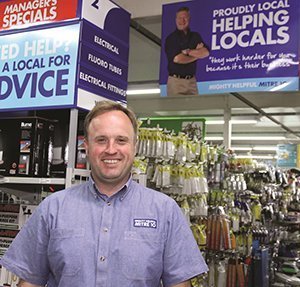 This local hardware store has moved with the times and local demographics.
DAVID BURTON tells us more.

Geoff Witzgall was practically born into the hardware business. At the age of three, his father Otto, and Uncle Peter formed a partnership to buy the Baulkham Hills Hardware store in the main street of Baulkham Hills in Sydney’s north west.

According to Witzgall, the site has housed a hardware operation since the late 1950’s. At one stage it manufactured windows for the increasing suburban developments that took over the dairy farms and orchards in the then rural area.

Otto Witzgall passed away in 2005 and a year later Geoff bought out Peter Witzgall’s share of the partnership and has run the business solo ever since. After school he did commence a commerce degree but told Australian Hardware Journal “I always knew I would finish up running this place so I didn’t complete the studies.”

He said that the two brothers had at one time been multi site owners with Mitre 10 stores at the current location, and a store at Cherrybrook. An additional Baulkham Hills store in the Stockland shopping centre was an attempt to market a different offer, concentrating on appliances and other parts of the range. In the end, the Stockland Mall store was beaten by the high rentals that are charged in shopping centres.

The original main street store had, for a time, also expanded its footprint. It currently sits at 700 sqm selling space and had taken over the 300 sqm occupied by a local electrical retailer. The extra space was mainly utilised for a range of garden furniture and other furniture such as cabinets and pantries. This space was sold off to acquire Peter Witzgall’s interest in the business in 2006.

Geoff Witzgall had a strategy when it came to buying out his uncle. While bank finance was an option, he chose to downsize the store and concentrate on servicing the needs of the growing population of unit dwellers that had been migrating into the suburbs as development exploded. This was just prior to onset of the GFC and unit development dried up dashing his plan in the first instance.

However there is now new work underway just a pleasant six minute stroll to the front doors of Mitre 10 Baulkham Hills Hardware and he is confident that his strategy was the right one.

Sales at the store are 90 per cent retail and 10 per cent trade. The type of trade sales include serving the local tradies and handyman community that “don’t have time to go Bunnings and spend half an hour to get what they want”’ said Witzgall. He added that these tradies know what his store stocks and in many cases don’t ring ahead and rely on the fact that stock will be available .

He believes that the compact size of his operation is like ‘the 7-Eleven’ of the supermarket channel. This convenience strategy is paying off when it comes to not relying on a few key departments for the majority of turnover. While paint account for roughly 20 per cent of sales most months, the store sells “a little bit of everything” according to Witzgall so ranking his departments is not something that is easily recounted. Maintenance hardware is the order of the day here.

The store has five staff including two with over ten years service, Christine Sommerville and Gary Jones. The yard has a small car park and there is street parking and a council car park nearby. The yard carries building materials in a limited range sufficient to satisfy its clientele.

Finding new ranges is made easy

As a long standing Mitre 10 retailer he admits that the situation prior to the Metcash acquisition was a little parlous. He believes that under the Metcash regime the quality of catalogues and price points is spot on and the mix of products and size of the catalogue offer suits his store.

There are certain ranges that he will absolutely make space for even if it means rearranging the store. He said hooks, taps washers and fittings and fasteners fall into that category. When it comes to ranging the store it can be difficult to keep on top of what is around. As a past visitor to the Mitre 10 annual conference and expo, he has used the time spent visiting suppliers stands to adjust his range.

A case in point is Lion Automotive who presented their full range at a recent expo that Witzgall attended. He has since added a comprehensive range of globes fuses and crimping fasteners to his inventory. He said that without a visit to the Group’s national expo he would never have known the extent of the range. He had a similar experience with Mirabella Lighting.

The other Mitre 10 initiative that has been positive for Witzgall is the ‘Click and Collect’ program which he says will allow him to generate sales of big ticket items that he can no longer find space for given the size of his store. He currently has over 500 registered members on the Mitre 10 website nominating Mitre 10 Baulkham Hills Hardware as their store.

A key recent development has been the uptake in leases for the shops that front Old Northern Road where the store is located. In the aftermath of the GFC, many businesses closed and the main street didn’t inspire shopping confidence with ‘for lease’ signs plastered on many windows. There is now only one shop available with Telstra about to sign a lease.

Mr Witzgall sees the day when high rise will overtake the main drag with commercial and retail units at street level. The trick is making such developments pay as The Hills Shire Council has imposed a four story high limit.

As someone who grew up in the local area, Witzgall has a couple of favourite causes that he supports through the store whenever he can. Although not a member of rotary, he has a lot of contacts with Rotarians through the store and will assist with their projects that need materials. The other one dear to his heart is The Mens’ Shed.

His next marketing project is to put together an offer that will promote the store to the local unit owners and renters. He will be aiming his local marketing activity to include the ideal needs of the modern unit dwellers. There will be plenty more of them arriving in the next 12 months. 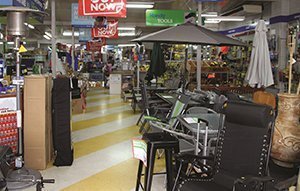