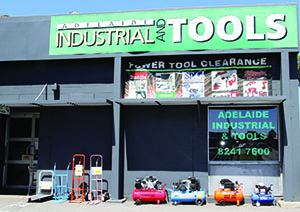 Michael Davis has built on his father’s foundation to expand a unique business. He is now taking the business to the next level as a member of Industrial and Tool Traders (ITT). DAVID BURTON travelled to Adelaide and filed this report.

Adelaide Industrial and Tools sits on busy South Road in Hindmarsh, South Australia. It has an excellent pedigree in servicing the market for specialised tools, and their consumables as well as lots of other items that are prerequisite on industrial jobs. It has an excellent reputation for service and range.

According to owner Michael Davis, the business is set to benefit as an inaugural member of HBT’s new division, Industrial and Tool Traders (ITT) after being a general member of HBT since 2011.

With the new group members set to meet for a full day briefing ahead of the three-day HBT National Conference on the Gold Coast in April, it offers the opportunity to meet with like-minded industrial specialists that are a bit more diverse from the general profile for HBT’s other two membership streams of hardware and timber.

Davis took over the business from his father, Stan who ran the business without the need for a show room. Stock was held in two shipping containers at one of his customer’s premises. The initial drive to move into their own building was in response to one of their key suppliers who refused the business an account in spite of its excellent credit rating. This company required all its distributors to ‘have a showroom’ and as a result, the current premises was acquired in 2004 by Stan.

During this time, the younger Davis was studying engineering and worked part time in the business. He gained valuable lessons in customer service from the store manager, Doug Baker who ran the showroom while his father was out liaising with key clients.

Davis came on board full time when Stan became ill and had to avoid the stress of running the business. He rolled out a plan to buy out the business from his father and over time, made a number of significant improvements to what was already a successful operation. In 2008, he became owner and achieved great sales with a very healthy bottom line.

When the Journal visited for this store profile, it quickly became apparent that Michael Davis is someone who is committed to service and prides himself as an innovator when it comes to building business. While the shop is open from 7.30am to 5.00pm, Mondays to Fridays, and 8.00am to 12.00pm on Saturdays, but in reality, he said that “we are open for business 24/7.” He remains committed to his customers and would come in to open up shop or personally deliver stock if his major customers called for something urgent.

Adelaide Industrial and Tools has built a reputation for being the preferred destination taps, dies and air compressors. Some of the compressors Davis stock are top shelf brands and models each worth about $50,000. He said the specialisation and expertise in compressors and fittings have resulted in quite a number of custom installations in workshops and other premises including a grape harvesting contractor.

The store stocks 40,000 unique items and has access to ‘millions of items’ which can be ordered through the extensive range of supplier catalogues. Quality products is a key selling proposition as far as Davis is concerned, as demonstrated by the full Knipex range of pliers and cutters, which the store buys directly from Germany. “Once we mentioned the Knipex brand the professionals are in,” he said.

Key changes that drove the business

Upon taking full control of the business, Davis made three significant changes. While the size of the store space has not been altered, additions to the store’s mezzanine storage area allowed direct investment buying of containers lots where appropriate.

He invested $30,000 to put in load bearing walls of sufficient strength in the lunch room and kitchen area to ensure that the walls could take the weight of the planned storage area above. The initial cost of this renovation would have been a costly exercise if he didn’t put his engineering degree to good use, as well as having the contacts from the customers he supplies to.

The second initiative was an extensive upgrade of the IT system. This was customised to give optimum benefits to his staff when it came to servicing customers, ordering stock and keeping track of deliveries and inventory.

The third and most recent initiative is the installation of a $30,000 digital screen with customised advertising for products, promotions and contact details of the business. This unit was set up to allow easy control of the display with the ability to add new items and offers as required.

The store location on South Road in Hindmarsh has a great vantage point with 200,000 cars a day passing by this digital screen. The investment has already started paying for itself with walk-in customers enquiring about the items or specials promoted on the screen. Having personally watched the display, it’s no wonder how being innovative can help to draw customers towards a business.

In 2011, Adelaide Industrial and Tools joined HBT. Now with the launch of HBT’s third grouping, ITT, Davis is looking forward to attending the group’s inaugural business seminars and workshop sessions in their upcoming national conference at the Gold Coast Convention Centre in April.

He added that there is a great deal of excitement about this new division and he is very keen to share ideas and comparing ideals with other industrial and tool store members in an open forum. Davis credits HBT head office for setting up the new division as his business (as with others in the group) didn’t really fit into the other two categories.

Furthermore, by setting up ITT, the group is now better able to negotiate lucrative deals and promotions from specialised industrial products suppliers. According to Davis, suppliers he interacts with seem to be satisfied with the outcomes they get from working with HBT. He likes the fact that while HBT goes out of their way to negotiate better deals for their members, the group was very proactive to ensure that suppliers could increase volume so that both sides benefit from the arrangement.

As for the future, Davis is planning a northern branch somewhere in the Barossa Valley. He has a 40-acre property in the area which is currently used to house three shipping containers of stock. Opening in the Barossa Valley would allow him to create a local ‘drive-in and collect’ facility to target the trade segment and it serves as an ideal outlet to service the northern Adelaide suburbs. A second generation family member building upon the foundation laid by the first always makes for a great news story.