The recent International Hardware Fair Cologne (EISENWARENMESSE) 2014 was characterised by ‘realistic’ deals and businesslike efficiency, as the world’s hardware industries strive to look beyond the global financial crisis. JOHN POWER reports from Germany. 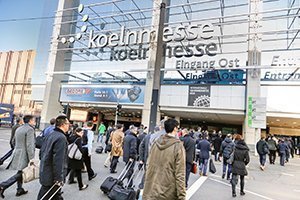 Held every two years, the International Hardware Fair Cologne, Germany, is a powerhouse of activity on a massive scale. The latest event, which ran from 9 to 12 March, featured 2,783 exhibitors from 53 countries, and drew a crowd of more than 50,000 people from 136 nations (including 300 members of the media, amongst whom I was the only Australian).

The Cologne fair is regarded as one of the world’s premier events for serious hardware industry buyers, retailers and manufacturers, and it was a privilege to spend four days roaming the 143,000 square metres of exhibition space speaking to both Australian and foreign visitors and exhibitors. Product categories, presented in separate halls, were displayed under banners of Tools; Fasteners & Fixings, Fittings; Industrial Supply; and Home Improvement.

The overall mood of the fair was surprisingly upbeat and businesslike, as viewed from an Australasian perspective (we continue to move at a comparatively cautious, post-GFC pace). This general enthusiasm may be attributable to the sheer range and diversity of marketing and buying opportunities available to many of our foreign counterparts. While Australia’s hardware industry is ultimately reflective of the activities of a handful of dominant retailers and suppliers, our Northern Hemisphere friends are far more accustomed to multifaceted, strategic and complex distribution opportunities and preferences. This liberty to make deals with a huge range of European, North American, Asian and South American partners means individual European manufacturers, for instance, tend to have greater confidence in their ability to overcome (or sidestep) negative market trends through their own sound corporate policies. In the face of price-driven competition from low-cost rivals, in particular, two major policy initiatives were evident in Cologne: a commitment to innovate and create original, high-quality, top-end product, thereby maintaining a degree of exclusivity; and a desire to diversify customer bases in order to avert exposure to downturns in single economies.

Both these policies were forefront in the minds of many successful exhibitors. For example, the US-based company Klein Tools, which entered the Australian market last year through its investment in Mumme Tools, said they were in Cologne to explore new markets and opportunities, consolidating their existing strong presence in places like Brazil and Australia. John McDevitt, executive vice president sales & marketing, and colleague Greg Palese, vice president marketing, said Klein’s 3,000+ SKUs, which include top-end pliers (tested to 10,000v) for electrical contractors, were warmly embraced by professionals because of their superior craftsmanship and safety-related features like specially insulated grips – features which are difficult for low-cost competitors to replicate, and which define value according to superior product design and fabrication quality, rather than cheap labour costs or unrealistic price points. Meantime, expansion into fresh markets, they said, was a means of not only building business, but also diversifying markets. Be sure to keep an eye out for our company profile on Mumme Tools in our June issue.

Suppliers of various product ranges including fixing and fastening technologies and anti-slip traction products, the first-time exhibitors at Cologne said they were concentrating on presenting their range of Croc Grip anti-slip tapes, with the aim of finding retailers, in particular, to sell their products in as many new markets as possible.

“We’re interested in the EU markets because everything is bouncing back,” Jamie Yates said, adding that it was important to present a clear point of difference in any company’s product ranges; in Perma’s case, this difference took the form of anti-slip products packaged and marketed specifically to appeal to DIY markets. Scott Yates said the company’s products had sold well via Bunnings in Australia, and he hoped a similarly large-scale retailer in Europe would be interested in adopting the range for domestic and light commercial applications.

David Steingold, sales manager key accounts at Israeli company Kapro, said he was in the process of building the Kapro brand in Australian markets, with agreements now in place for products to be retailed through Mitre 10. As a manufacturer of top-end levels and measuring equipment, he admitted that the market was burdened with a surfeit of cheap product lines. Nevertheless, he agreed the secret to success in Europe and elsewhere was to adhere to principles of quality and innovation. “That’s really what we’re about,” he said. “Customers come to me and ask, ‘What have you got that’s new?’ because we have that reputation for product development.”

Another Australian exhibitor in search of fresh markets was Melbourne-based storage solutions company Globel Industries. managing director Chris Gobel said his company had customers in Australia, NZ and Singapore, and was about to deliver inaugural orders into the UK.

Gobel said success in Europe and other international markets was more dependent on persistence and hard work than broad-brush fiscal trends.

He said it was vital to be sensitive to the needs of individual markets by creating different product styles and sizes to suit specific customer preferences. Overall, he said visitors to trade shows like Cologne tended to be serious-minded professionals who were keen to shore up agreements.

“And once you get a few customers, it gets easier,” he says.

“We are mainly looking for distributors,” he said. “In Australia we have a full cutting tool range, but in Europe we are involved mostly in power coils. We have a distributor in Sweden and Finland who is doing great things and we’d like to expand further.”

Brown described the European market as ‘tribal’, with different countries possessing their own unique features. With significant competition from well-established firms, he is another believer in the need to create a point of difference when entering or consolidating new markets. He said Bordo, for instance, has a strong culture of customer service and respect.

Compared to previous Cologne fairs, he said this year’s attendance was numerically healthy and businesslike. “At this show we are tending to get people who are interested in quality relationships, whereas in the past when things were better economically it might have been just a junket.”

Indeed, a healthy ‘give and take’ business sensibility seemed to be a major consequence of the recent financial crisis.

Merely presenting a stand at a major fair like Cologne is no guarantee of instant success – exhibitors and customers alike require a realistic appreciation of each other’s needs.

According to Randle Major, managing director of the Auckland-based company ACME Supplies, fairs like Cologne are important for consolidating relationships with manufacturing partners and agencies, and for presenting opportunities to bring new products into NZ. ACME is the NZ distributor for a wide range of products from respected companies, including Felco and Iseberg Rapid.

“I’m here mainly to talk with Iseberg Rapid,” he said. “They are releasing some very innovative products at this show.”

He said it was rare these days to stumble upon a wonderful product that had slipped past all other suppliers’ notice, let alone opportunities for exclusive distributorships.

Nevertheless, he said the world’s manufacturers have great respect for the Australasian hardware market, which is seen as mature, well run, and highly organised with an affluent clientele.

“To be successful you really have to sell yourself,” he said. “Markets these days are increasingly ‘global’ in nature.”

It is impossible to itemise anything but the tip of the iceberg in terms of new products, some that drew big crowds included a newly developed work centre from Triton Tools – watch out for this product’s release in Australia later in the year, along with a revival of the entire brand’s position in our market.

In summary, there is a definite trend towards diversification of customer bases, with more and more companies seeking to establish a truly international footprint. Other key messages from Cologne included: don’t waste time with cheap products, but establish a niche with superior lines that will ensure exclusivity; and be prepared to tailor product ranges to suit specific ethnic or demographic markets – one size does not fit all.

The next International Hardware Fair Cologne will take place from 6–9 March 2016. To register or find out about participating, go to: www.eisenwarenmesse.com