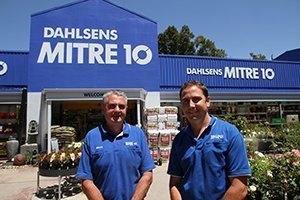 Dahlsens is a long established name in the timber and hardware business with outlets across regional Victoria, along with two in NSW. The company, which is still family owned, can trace its roots back to 1877.

Dahlsens has been a long term member of the Natbuild group, taking advantage of the benefit of group buying power. When the Natbuild-MITRE 10 joint venture was announced by Metcash Ltd it gave Dahlsen’s management the opportunity to look at leveraging the MITRE 10 banner in appropriate locations.

There has been a hardware store in Myrtleford for over 40 years and it was originally one of the MITRE 10 branded stores. The original owner eventually sold to Dahlsens who chose to trade under their own name at the time.

For many years the store had a Retravision franchise in the trading area to service the needs of the local community and surrounds for whitegoods and appliances. However, with the demise of the Retravision operation the space allocated was devoted to creating a full Stihl shop within the store with a range not found in too many other locations.

Not just a rebrand

The final result of rebranding to MITRE 10 looks terrific at this store. Freshly painted external signage and instore MITRE 10 promotional header cards add to a clean look and feel with plenty of choice across departments.

According to Bryan Froud, Dahlsens Area Operations Manager for the Gippsland region, the plan to rebrand gave an opportunity to consider department adjacencies and this led to most departments moving location to better serve the customers.

Mr Froud’s area of operation includes stores in Traralgon, Bairnsdale, two Lakes Entrance stores (a trade site and a retail site) and Myrtleford. The Bairnsdale site has also converted to MITRE 10 branding and is a larger store than its Myrtleford cousin.

According to Mr Froud, who has 17 years under his belt with Dahlsens, the work on repaint and conversion started in May 2013, with the official relaunch taking place in November. He said that virtually every department in the store was moved to another location and the shop was completely re-racked, with new racking.

He said that customers appear to have voted with their wallets. “Certainly our numbers are showing positive results. And just from a feedback perspective, customers are finding it a lot easier to shop.”

“It’s a lot more relevant now, and probably the other comment is – where we haven’t really done a huge amount of work – it looks like it’s a bigger store with a wider offer when it’s just been re-merchandised.”

Bruce Manning is a man who knows this store well. He managed the store for the original owner before it was sold to Dahlsens. Stuart Gilchrist, the original owner also had a store at Beechworth. He was looking for a manager for Myrtleford, so he advertised in Melbourne where Mr Manning was working for Bowens in the days before the big box stores came on the scene. “I sort of thought it was an opportunity. So I came back here; I had family around here,” said
Mr Manning.

According to Mr Manning the original hardware store was only a quarter of the size of the offer today. Over a period of about 12 years the business grew pretty quickly so the expansions followed. When MITRE 10 used to have their three categories the store traded as Home and Trade, and put a new big timber yard, and traded for another five or six years before Dahlsens bought it.

With such an experienced manager and a long term dedicated team, it is no wonder the store picked up an exceptional score in MITRE 10 store standards survey. “They just did a survey in mid January, and our store came up pretty good at 98 per cent, a rating of ‘5 Paintbrushes’, and they said there’s probably not been another store in Australia that scored that well,” he said.

Twenty full time and 10 part time staff are on the roster to keep the store trading at an optimal level with eight team members having 10-20 plus years service.

The trade centre at this store has a drive through entry so tradesmen can get in and out quickly for timber, and building supplies. There is a convenient walk through from the trade centre into the hardware section where all the additional necessities are on hand.

The top three departments are Paint, the Stihl shop and the plumbing/bathroom area and the business is split roughly 60 per cent trade, 40 per cent retail. The shop area is 2095 sqm, trade centre/timber is 1750 sqm and the live plants/ garden area is 450 sqm. This configuration allows the Dahlsens MITRE 10 team to make the most of their offer which is not only sold to locals but to a wider catchment in the Ovens Valley.

Mr Manning told Australian Hardware Journal that there’s a perception that the store is bigger than it is. He said the layout and adjacencies appeared to make the place feel bigger. “By re-running the stands and new locations on a lot of items, it’s actually made the place feel a lot bigger and appearing like we’re carrying more stock, although it’s probably not as much as what people really think it is.”

Departments that have increased ranges in a big way with the MITRE 10 tie up include Auto which Dahlsens weren’t really into according to Mr Manning, so there was an opportunity with no auto place in town. Other areas of expanded range include outdoor leisure, housewares, and also the full Stihl shop.

Mr Manning said the store’s catchment up the Ovens Valley is probably about 20,000 people all the way up to the ski fields (Falls Creek, Mount Hotham, Dinner Plains) “Our trade side’s busy delivering up to there, so they’re building, doing a lot of things over summer. 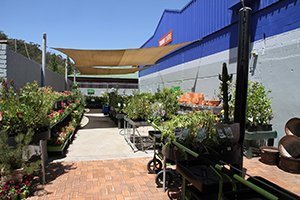