New-generation ‘brushless’ cordless power tools are more powerful and energy-efficient than traditional brushed-motor tools, but there are good reasons for a slow and measured introduction into the Australian market. JOHN POWER reports.

In the last couple of years, ‘brushless’ cordless power tools have appeared quietly in hardware stores through- out Australia, introducing a new kind of motor technology to categories such as impact drivers, impact wrenches and top- end drills. Brushless tools in hardware power tool categories are relatively new – Panasonic was amongst the first companies to release products into Europe and the US in 2006. In Australia, it is only in the last two or three years that brushless power tools have gained momentum in retail hardware outlets. Nowadays, major companies like Me- tabo, Panasonic, Makita, Bosch, DeWalt, AEG, Milwaukee, Hitachi, and others all have a brushless power tool presence in the Australian market. While brushless motors have found a niche in ranges of impact wrenches and drivers, the technology is already being adapted to other power tool categories and looks set to grow. The term ‘brushless’ refers to the motor system in these new-range tools. Older- generation ‘brushed’ motors, dating back more than a century, are simple devices equipped with a fixed ring of magnets and carbon brushes, as well as an inner shaft fitted with an armature of copper windings and an elementary commutator. Electrical energy passes to the armature via the commutator, causing the coiled copper to become magnetized; the outer ring of magnets repels these similarly magnetized copper coils, forcing the shaft to rotate. The commutator continually flips the magnetic field to maintain perpetual rotational cycles. The motor functions as long as there is an energy supply – more energy means a faster rotation. However, the system is not perfect; brushes, which have physical contact with the commutator, waste energy through friction and heat. And, as with any friction-based mechanism, units may require periodic maintenance after prolonged use. Brushless motors, on the other hand, do not feature brushes or a commutator, and essentially invert the technology so the rotating shaft contains the fixed magnets, and the surrounding motor housing contains the copper coils. An electronic switch – the brains of the unit – regulates the power input to create a smooth and consistent rotation at the desired level. Given the absence of brushes, this system develops far less friction and heat than old-style brushed motors, creating greater energy efficiency. Brushless units also tend to be lighter, more powerful and more controllable (in terms of energy input) than brushed motors. This last point, in particular, is important in the battery-dependent cordless market: indeed, it has taken many years for battery power packs to emerge from the shadows of corded tools, and innovative technology such as brushless motors only strengthens the viability of the cordless genre, which already represents more than half of the market in Australia. Brushless units equipped with modern lithium ion batteries can save energy in two ways. First, electronic power de- livery allows for reactive power distribution in most reputable models, meaning tools automatically sense the amount of power required to complete a given task and regulate the delivery of sufficient power – and no more – to complete that task. In other words, driving a screw into softwood (at a nominated speed) will actually draw less energy than driving the same screw into hardwood. By contrast, brushed motors generally lack this sophisticated power control. Second, apart from smart power al- location and regulation, brushless tools are innately more energy-efficient than brushed tools due to the near absence of friction, as mentioned earlier. Depending on the brand, tools can be 20–30% more energy efficient than comparable- strength brushed models.

So, in light of all these amazing attributes, why aren’t brushless tools the new “poster children” in hardware stores? Why aren’t store windows filled with flashy announcements about the arrival or these grand new-generation products? The reality is that the release of any revolutionary range of products is amongst the most challenging activities that a company can face, and new releases must be offered to the market with immense care and at a measured pace. The business world, notably the automotive and computer industries, is littered with tales of brilliant new technologies that have led to disastrous outcomes due to hasty rollout. Retailers should be aware of these sensitivities, which we’ll discuss below, and exercise patience. In the case of brushless power tools, consider the following ‘generalities’ relating to marketing. If a company, which is producing both brushed and new generation brushless ranges of tools at the same time, heaps TOO MUCH praise on its new-generation products, then there is a risk that customers will abandon the older ranges overnight. This would be disastrous for the entire power tool sec- tor, including retailers, because of the massive quantities of traditional stock still in stores and warehouses. Relatively slow turnover rates only complicate the drawn-out sales process. Therefore, it makes sense to tread softly in the early stages of a revolutionary release, applying new technologies to only limited product categories targeted at specialist customer bases, and announcing revolutionary releases in a way that won’t make older ranges look outdated immediately. It also makes sense to price new-generation ranges at higher levels, which prolongs the appeal of older-style products without the need for excessive discounting. By limiting the application of new-generation technologies to a relatively small bunch of product ranges, the market has time to absorb and understand the concepts of the new technology. And by setting prices of new-generation products slightly above mainstream thresholds, existing inventories will continue to find favour in short-term markets at decent prices. If the ultimate aim is to phase out older technologies completely, this must be handled very slowly in order to al- low manufacturing facilities to adapt their operations accordingly. If the up- take of new-generation products is too swift, then a company’s existing plant might become obsolescent too quickly, leaving insufficient time or resources to establish new production lines for the next-generation ranges. This is particularly pertinent in relation to power tools, which at the top end require significant aftermarket care through the provision of spare parts and accessories. This aftermarket industry – as well as long-term loyal customer bases – could be jeopardized if older plant were made redundant too rapidly, leaving owners of older equipment feeling dissatisfied and ‘forced’ to upgrade to new ranges. Once a specialist market has embraced a handful of new-generation ranges, manufacturers typically broaden their new product ranges while reducing production rates of older-generation items in equal measure. This slow rebalancing of production – from old to new lines – allows time for a gradual and efficient transition without threatening existing business operations, cashflow, or the aftermarket needs of older product ranges.

Brushless technologies are gaining momentum in many international markets, as observed at the recent Eisenwarenmesse trade show in Cologne, and it seems only a matter of time before Australia benefits from more broad-based product offerings in a growing number of categories. However, both manufacturers and retailers need to work in partnership to make sure this lengthy revolution is silent, bloodless and profitable for all stakeholders.

The Arbortech AS170 has long since been a leading name in clean and dry masonry cutting and well known as a clean and versatile tool. From this award winning power tool manufacturer, comes a new in­novation in industrial caulk cutting, mak­ing the AS170 a must-have multi-tool for the general contractor.

The saw has now found a new stand­ing of excellence in the waterproofing industry, with the introduction of its new industrial caulk-cutting blades.

It is this unique cutting action that minimizes airborne debris and particles which reduces silica exposure, unlike a ro­tary diamond blade which traps brick and mortar particles against the disc and then pulverizes them into deadly crystalline silica particles, which can lead to silicosis and lung disease, according to Arbortech. 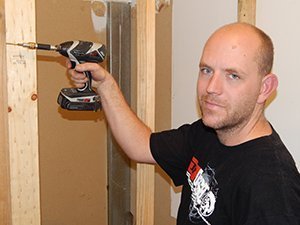 The hammer-and-chiselling action of the Arbortech AS170 produces rubble fragments much larger than a grinding wheel and when this is combined with the attachable wet-dry/shop vacuum adaptor and dust boot, the AS170 becomes one of few acceptable masonry saws capable to be used dry and indoors.

Of all the improvements made to the AS170, the added safety features have been widely received including the dust-inhibiting centrifuge, which is a de­vice designed to extract and prevent debris from entering inside the tool and damag­ing the internal mechanism. The auto-cut off carbon brushes is another safety feature, designed to automatically interrupt the cir­cuit when the brushes have worn beyond their operational limit and also designed to extend the durability and use of the AS170.

The Arbortech All Saw continues to be reengineered and retooled to showcase its cutting abilities, with the blades also receiving an upgrade, from the tungsten-carbide teeth, to the solid steel frame, to the redesigned taper locking blade-bolts.

The AS170 kit, as a whole, weighs 18 pounds, while the unit itself weighs in at 9 ½ pounds. The complete Arbortech AS170 kit includes each of the top three most popular masonry blades, as well as all accessories required to begin cut­ting, a blade-bolt tightening torque key, blade-sharpening disk and instructions, spare belt, and additional blade bolts.

The Arbortech AS170 has been a growing name in the masonry field for almost a decade, and according to Arbortech, is the most exemplarily and award winning masonary saw in the construction industry to date.