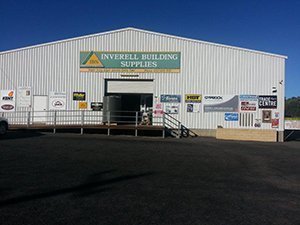 HBT held its annual conference and expo at Jupiters on the Gold Coast in April and during proceedings, the traditional store of the year award announcement is always eagerly awaited. This year the proud winner is Inverell Building Supplies.

Co-owner, Leigh Muggleton took to the stage to receive recognition on behalf of his fellow partners, and of course the team members that made the award possible.

When receiving the award Mr Mug­gleton said he believed one of his great­est assets, apart from the HBT group, was his staff.

“I’d rather call my staff our team members. We’ve just got a crew here that is second to none, although I’m pretty biased on that of course,” Mr Muggleton said.

As co-owner of the business, Mr Mug­gleton has a lifetime of experience to back up his drive to succeed. He started young in the trade and told Australian Hard­ware Journal that he commenced work­ing at the age of 14 years and 10 months. That was the precise age, at the time, that he could leave school.

He did so, and commenced with D M Buckleys, a division of Hume Timbers at their Cabramatta NSW branch.

According to Mr Muggleton, Inverell ini­tially did not have a very good trade store.

“Twelve years ago we had builders say if you’re coming back to town, would I set something up. So I had two other part­ners and myself look into it. We went to the bank and begged for some money and started on a shoestring budget,” Mr Mug­gleton said.

Inverell Building Supplies was launched for the serious do-it-yourselfer and also the usual supplies for the trade.

The store has a motto reinforced from the top down which states, “the right price, right service every time” and is vitally important in the store’s success

Mr Muggleton believes retail success is all about providing service to kill for, which is why he believes his store is capable of withstanding anything that Bunnings or anybody else throws at him.

On the matter of service, Mr Muggle­ton believes that it is no good for a staff member to serve a customer when they don’t know the difference between a hex bolt or a cup head bolt.

“Expertise is what counts rather than have store people that say – if you give me a minute I’ll get the right person,” he said.

It simply isn’t what his tradies or seri­ous DIY customers would tolerate, he said.

The biggest turnover in the store is tradi­tionally gyprock or plasterboard. Howev­er, due to hail storms that devastated parts of the town, technically Bluescope Lysaght is the largest-selling supplier at present.

That said, Mr Muggleton said that once the roofing replacement work abates, he sees plasterboard continue as number one, due to new building and renovations.

He believes that Inverell Building Sup­plies is the biggest Bluescope Lysaght cus­tomer in the north west region currently.

“We spent over a million dollars with them last year and we’re well over a mil­lion already, this financial year,” Mr Mug­gleton said.

Coming in second in sales performance is timber, with all species, particularly decking and cypress, very big in timber at this store.

Timber is followed by a lot of RIO Steel and RHS. Mr Muggleton said he put this in as an add-on because the builders wanted it.

“The builders like us because we’re a one-stop shop and there’s not much they can’t buy. We don’t sell windows or tiles but most other supplies are available,” he said.

“It is just going really well. Angle as well, the cattle rail, all that sort of thing. The bottom line is if our builders want it and we can sell it, it doesn’t stop me to think, well that’s not a normal hardware line. We really get great support because we’re in HBT and the reps know how to look after us,” he said.

Australian Hardware Journal is always keen to find out how stores are being serviced these days, in the face of growing e-com­merce. In light of this, it was pleasing to hear Leigh Muggleton comment on the value of the old-fashioned, face-to face sales call.

“We get tremendous service from our reps, such as Bluescope Lysaght, Sim­monds Lumber, USG Boral plasterboard. I am a firm believer that you need your rep, because they’re the ones who can help you and when you ask, it’s amazing what you get,” he said.

This help has often resulted in state sales managers ringing Mr Muggleton to say that they “don’t know what he’s doing down there, but to keep doing it”.

“The answer is usually simple, as an independent store, that supports HBT, we can do what we want and I don’t expect billion dollars in behind,” he said.

Asked to proffer a reason for the HBT store of the year award, Mr Muggleton said he believes the store was selected because he supports HBT with over 100 suppliers that he uses out of the HBT pre­ferred supplier group.

A case in point is CSR Gyprock. Mr Muggleton said that he started with them, and the rep is fantastic, but they pulled out of supporting HBT. “If you’re in a buying group, that’s what you’re there for. I’ve ar­gued with quite a lot of suppliers and actu­ally been able to get them to stay in and I’m not on the team at HBT down at Batemans Bay head office. But they’re my family you know,” Mr Muggleton said.

This is a fine sentiment from a winner that shows how having “the right price, right service every time” and supporting your buying group, pays dividends. 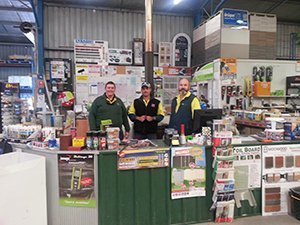