Pryda is slashing new build times by launching an innovative flooring sys­tem that is fully installed in an aver­age of just two to four hours, and is imme­diately ready for walls and roof trusses. 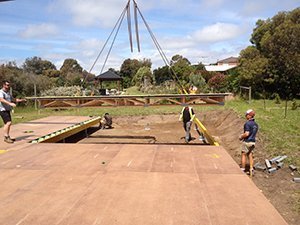 Designed to benefit both clients and build­ers, the new Pryda Trussed Floor Cassettes are part of a year-long reveal of new products, to celebrate Pryda’s 50th anniversary and its position as Australasia’s most trusted timber truss and frame solution company.

“The floor cassettes certainly meet that need by significantly reducing the time taken to install a flooring system, taking hours, instead of the days it takes to install a concrete slab. The floor cassettes also equal the cost and quality of traditional methods and can be used on both the sub and first storey floors,” Mr Gaiardo said.

Mr Gaiardo says the prefabricated floor cassettes combine all the elements of a flooring system, including floor trusses, strong backs and particle board flooring, into a number of large but manageable floor panels. They are lifted into place us­ing a mobile crane or crane truck, to cre­ate an entire floor in a matter of hours. For subflooring applications, Pryda has joined forces with a concrete free foundation sys­tem called Surefoot Footings. The system grounds posts of any size without the need for digging, excavation or cement, and there’s no need to wait for concrete posts or strip footings to cure before Pryda’s floor cassettes can be installed.

Surefoot’s engineering principles are based on piling technology, using a com­bination of skin friction and point bear­ing. A patented steel plate secures pins in place, resulting in a foundation spreading over a great surface area and achieving larger load capacities. “All in all, the con­crete free foundation and our Pryda floor cassettes means a complete foundation and subfloor can be supplied and installed in under two days by a single supplier,” Mr Gaiardo said.

• 133m2 subfloor platform, consisting of 10 cassettes, was fully installed in four hours. This is compared to the four days it would have taken to install the tradi­tional timber subfloor originally speci­fied in the plans.

• A 82m2 first floor platform, consisting of six cassettes, was installed in just two hours. This is compared with the eight to 10 hours it would have taken to install the floor trusses and flooring separately.

According to Mr Gaiardo, shaving days from a construction schedule adds up over several projects and means builders can take on extra work and realise additional profits, without increasing overheads or compromising quality.

“They can also benefit from faster pro­cessing of progress payments for com­pleting the foundation to framing stages, while clients benefit from a faster hand over and settlement,” Mr Gaiardo said.

“Pryda has really opened the door to a new market in floor cassette systems for both sub floors and first storey appli­cations and this innovation is what our company is about. Our goal is to provide builders with a one-stop-shop for prefab­ricated solutions and this new offering supports that,” Mr Gaiardo said.

Pryda is this year celebrating its 50th anniversary after it was established by builder, Ray Turner, in New Zealand in 1964 (then known as AR Turner & Com­pany), who pioneered the design and manufacture of timber joining connec­tors to simplify timber construction.

Over the past 50 years Pryda has con­tinued to revolutionise the building in­dustry by inventing the steel angle brace, Claw® Nail nail plates and world-leading truss design software.

After a series of mergers and takeovers beginning in 1986, Pryda is today part of the international corporation Illinois Tool Works (ITW), a Fortune 200 diversified manufacturing company operating across the globe for more than 90 years. 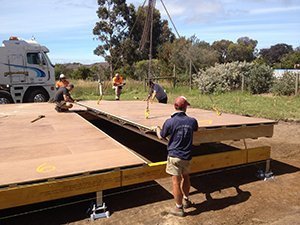