Arbortech recently launched its innovative Contour Random Sander at the Maleny Wood Expo held in Perth WA, which is now considered a breakthrough for sanders in the woodworking industry. 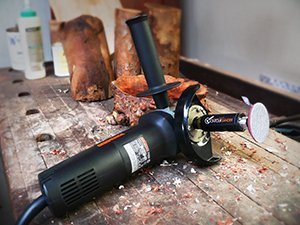 Launched just in time for the commencement of the Australian woodworking season, the new sander was been specifically designed to reach hard to reach internal profiles, while the patented flexible sanding pad moulds to the shape of the timber without burning or digging in at the edges

Proud designer of the Contour Random Sander, Kevin Inkster, said that for over 30 years, he has been trying to find a solution to the often difficult task of sanding.

“After so many years we have finally developed a method that not only does the job well, but surpasses all our expectations. When we launched the Contour Random Sander at the Maleny Wood Show, it sold out in the first day! We know that woodworkers have been waiting a long time for product like this and I believe it will also be welcomed by many other industries,” Mr Inkster said.

The Contour Random Sander is now being described as a breakthrough development for the sanding of deep internal shapes and contours. The sander is developed with a patented angle grinder attachment, which has a powerful random orbital sanding action.

Consisting primarily as a dynamically balanced shaft which attaches to any standard angle grinder, the Contour Random Sander can also rotate freely because it features a flexible rubber sanding pad that is attached to the other end of the shaft via a set of bearings.

The pad is offset from the central axis of the shaft, so that it is driven in a random orbital manner when the pad is brought into contact with a surface.

The 50mm abrasives are also coated with a pressure sensitive high temperature adhesive, which is easily attached or peeled off the rubber pad.

It seems that so much energy is passed to the sanding head from the grinder motor, that hook and loop solutions are often not successful in this application, according to Arbortech.

The shaft of the Arbortech Contour Random Sander allows the sanding head to burrow into deep hollows, while the unique sanding head flexes and reaches into areas that were previously impossible for conventional sanders.

Even though the random action is powerfully effective, it has been specifically designed so it does not dig in and does not leave swirl marks or damage the surface.

When it comes to freehand shaping and sculpting timber, Arbortech’s power carving tools have grown to become a woodworker’s preferred tools.

Over the past 25 years sanding internal profiles and rounded shapes was always challenging, however the Contour Random Sander is considered to be the new found solution to this frustrating problem.

Arbortech is an Australian company which has engaged in the research, development and manufacture of innovative technologies for many years. In 1988, Arbortech was incorporated with the release of its Woodcarver™ Blade, which is a revolutionary product that allows the user to powerfully shape wood using free-hand techniques. Arbortech also gained international recognition for its development of Airboard™, which is a personal hovercraft that was featured in the opening ceremony of the 2000 Olympics in Sydney.

Arbortech has also positioned itself as a progressive company delivering unique woodworking and masonry cutting power tools and the company aims to continue to gain a reputation for innovation, engineering and excellence and cutting edge technology.

With Arbortech’s head office based in Perth, Western Australia, the popular company also has international offices in the USA and Europe.