Wal*Mart, has long been the world’s largest retailer. At fiscal year’s end, the company is operating 3,214 stores, of which 1,133 will be international units.

Wal*Mart is also the largest company in the United States in terms of overall sales. Wherever it operates, it becomes a fierce competitor to local independent and chain stores. The fact that so many of its stores are international is not fully appreciated by vendors, the investment community or most of its competitors.

The growth in its international division in the last five years has been spectacular. Five years ago the company had only 276 international stores, mostly in Canada and Mexico. By the end of January 2002, the company operated more than 2,700 discount stores, Supercenters and Neighborhood Markets, and more than 490 Sam’s Clubs in the United States.

And in early February of 2002, the company announced its purchase of Puerto Rico’s leading supermarket chain, which, with its own stores, makes it by far the dominant retailer in that country.

The sales of Wal*Mart International, by themselves, rank the division high up on the list of the world’s largest stores. French company, Carrefour, parent of Castorama and probably the most aggressive global retailer, did $58.8 billion a year ago; Ahold, the Dutch supermarket/hypermarket giant, $47.6 billion; Metro, another hypermarket operator, $42.6 billion, and Sears, $40.9 billion. Wal*Mart International did $32.1 billion.

According to the company, the best is yet to come as it forecasts international sales to reach $160 billion by 2008.

Wal*Mart stores are not major outlets for hardware/home center merchandise, but their very size and volume make them worth a competitive look. And in the housewares category, they are a very significant world and local player. They also are formidable marketers of sporting goods merchandise, and in the US are now the largest toy retailer, having passed specialty chain Toys “R Us.

What has made Wal*Mart International successful recently has been its acquisitions and the fact that it is a “quick learner”. It has learned not to try transplanting Bentonville (the location of its head office in the Mid West) ideas untouched and unchanged. It will try existing products, promotions and procedures, but if they don’t strike a responsive chord with customers or employees, they are dropped or changed dramatically very quickly.

Germany’s trade press and competitive chains have pointed out that Wal*Mart’s progress in Germany is not what was expected, but in the past year, the company has made significant progress. It has revamped more stores, modified some of its traditional operational policies to fit the German culture, while bringing the idea of everyday low prices to the benefit of all consumers by forcing German competitors to reduce their normal margins to some degree. 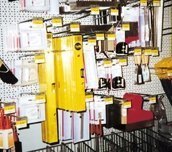 It also is not trying to force the Wal*Mart name onto customers in other countries. If a different name has been successful (or is needed), so be it. Thus, Asda, the company it bought in the UK, continues under its original name. In Mexico, it operates under Aurrea and Bodega as well as Wal*Mart. These are just a few of the many names under which the Bentonville giant is reshaping world retailing. In Germany, it converted its two chain store purchases to Wal*Mart because neither chain had been a market leader. The company believed that the rebuilding could better be done under the Wal*Mart name.

Operating so many different types and sizes of stores makes global sourcing somewhat difficult but nonetheless essential. Global sourcing is responsible for identifying firms capable of being a global source, which means vendors must be able to establish powerful global brands and/or have the factory capacity to serve all international and domestic units.

Wal*Mart is even using its international expertise and expansion to help reduce its own operating costs. It is setting corporate expectations and insisting on consistent practices among its divisions and countries, which includes sourcing goods being used in the stores’ operations, not just those for re-sale.

Currently, the international division has 45,000 suppliers. Obviously, breaking into that huge field of competitors calls for strategic planning as well as sharp pricing and product development on the part of domestic vendors in countries in which it is now operating.

Wal*Mart in Dortmund, Germany has a range of hardware and decorative products, a lawn & garden centre, as well as housewares, sporting goods and automotive departments

Wal*Mart says it is partial to firms which already have a global presence and substantial volume…seeking products and brands which will enhance its reputation. The company’s international division realises retailing is a localized activity, so it expects its vendors to gain consumer insight on an international basis, and adjust accordingly.

How important is Wal*Mart on the international scene? Perhaps nothing says it better than to realise that 100 million people are in Wal*Mart stores around the world every week.