The Hardware Man is a locally owned and operated family business which has been serving Illawara since 1953. The store is situated approximately 10 kilometres south of Wollongong. Today’s general manager, Jeffrey Hay is the fourth generation Hay to be working in the hardware industry.

Beginning at 15 years of age, he started on the floor packing shelves in a Bathurst store, before working his way through the different departments and becoming the general manager role at The Hardware Man, a title he proudly possesses. Hay is humoured by the fact that he was once his father’s employee, but is now his boss!

With such a wealth of hands-on experience, Hay easily puts into words what a store’s aim should be in order to prosper: “Provide good quality products and services with friendly, helpful and knowledgeable staff.” He believes that “number one customer service” distinguishes the store from its competitors.

Hay also realises how important it is for customers to be served by one person rather than being given a map and told to look for a product themselves. As this is the store’s main point of difference, Hay believes its one challenge in the future will be to maintain this high standard, and stay focused on the business without being caught up with the big box stores.

Management also ensures that, for the benefit of staff members, when a higher position within the store becomes available, they always consider the staff already employed rather than recruiting externally. He says: “This provides an incentive for staff to upgrade their skills knowing they may be promoted”.

Employees are also encouraged to undertake customer service training conducted by TABMA (Timber and Building Materials Association), and attend Dulux Paint schools for the 3D paint stores. “We also send managers to Skill Path seminars which should give them the necessary expertise to better supervise employees and handle day to day operations.”

The team behind The Hardware Man wanted to grow the business considerably some time ago to consolidate its position in the area as the first choice for local customers.

Its first expansion took place in the form of the Bulli Hardware Man store, followed by Illawarra Foam and Rubber and Shellharbour Super Paint centre in September 1998, then Security World in March 2000.

Fourteen months later, the Dapto Hardware Man opened up for business. More recently, it extended its services to the Shoalhaven area by opening a Nowra Super Paint centre in January this year. The move to open a paint specialist store was to capitalise on the growing consumer interest in paint products and accessories, particularly amongst female buyers. Hans van de Haar is the managing director with the job of overseeing all these oulets.

With all these stores within one camp, The Hardware Man became part of the National Builders Suppliers Group in 1998 and, according to Hay, it hasn’t looked back. The group consists of independent owners who meet up three times a year to discuss important issues in the industry. “We all decide the suppliers we want to deal with and the group doesn’t tell us how to run our business. There is more focus on better buying power,” he says. When the business first joined NBSG, they had two stores, but there are six in the stable.

Running a large, diversified business poses specific challenges for proprietors and managers. Hay recognises the importance of making sure all the stores are moving in the same direction; that there is a common approach to business. “Having the right staff on board is also crucial in this effort,” he says.

The Hardware Man is 49 years old and measures 7950m2 with parking on both sides of the store as well as on the street. All up, the customer breakdown is 60% retail and 40% trade.

The store has a large range of timber available and on the premises with large timber machining that can cut to size. Hay says the store is classified as power tool specialists, carrying a large range of DeWalt and Makita products. In addition, the store offers the service of locksmiths and deal in both domestic and commercial door hardware.

Currently all marketing is handled through its advertising agency which sees that the store is publicised through many vehicles including TV, radio and print. The store also grants sponsorship to local sporting teams. 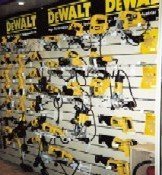 Since the Hardware Man first opened in 1953, Hay and his family have seen and experienced significant changes in the hardware industry. “We have witnessed how, if your store doesn’t grow, it will be left behind and we have also observed that customers increasingly want more information on products and that there are less Australian products made here.”

The only thing that Hay would like to change is the store layout – a common frustration with hardware store owners after years of renovation. “I would like to bulldoze the lot and start again. Over the years, we have added again and again. It would be nice to have our 57 full time staff and 30 casuals under the one roof with no walls in between, but saying that we just have started another extension.”

Despite this, Hay is happy with the Micronet IT system the store has used for the past 10 years and they have no plans for change. He is equally impressed with the continued growth and success of this family store under his direction.

Written and compiled by Elizabeth Huggins