Already the world’s largest home centre chain, the Home Depot is finding new ways to grow as it seeks to reach consumers not within easy shopping distance of its 1,500+ orange-trimmed big boxes. 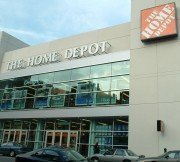 In this urban setting, Depot provides two floors of parking and two of retail selling space

Earlier this year, the Home Depot simultaneously opened two smaller (70,000-80,000 sq. ft.) stores — one in suburban Glenview, Illinois, and a two-story store in a neighborhood area of metropolitan Chicago called Lincoln Park. With these two stores, the company also revealed more examples of the changes and improved signing being used to update its original warehouse format by making the stores more attractive and consumer-friendly as it competes with faster-growing competitor, Lowe’s.

The Lincoln Park store relieves sales pressure on a full sized Depot unit several miles away, which was doing an estimated $90 million or more in sales. It also serves as a testing ground for a Depot development which would provide more intense competition for neighborhood hardware stores in other metropolitan areas. In Lincoln Park, for example, the new Depot unit is half a block from a small True Value hardware store which has served the area for years.

In the urban Lincoln Park area, parking is at a premium, so Depot also razed some old buildings and erected a four-story structure, the top two floors being a 200-space parking garage, with the lower two floors being the sales area.

Merchandising experiments
The Glenview store adopts some of the changes tested earlier this year in Blairsville, Georgia, near its Atlanta headquarters, while other test elements were not used. In both Glenview and Lincoln Park, warehouse racking is off white, not the traditional orange. While the Blairsville store tested a racetrack layout, Glenview’s departmental arrangement is the typical Depot layout. Departments are just smaller. Off-white racking now seem to be Depot’s new standard.

Home Depot is testing self-checkouts in the Lincoln Park urban store, as well as some other stores

Blairsville also positioned female-friendly categories (carpeting, etc.) near the front on a tiled floor, but in Glenview, they are further back in the store. The floor is concrete, but with a more highly polished surface than earlier Depot stores.

In both new stores, signing is much improved as it is in all new Depots. This new signing program is being retrofitted to all units. It identifies departments better and lists product categories to be found in each aisle, making it much easier for consumers to find merchandise. Manufacturers, it is said, are being asked to pay for the signing, even though no brand names are used and categories are listed by generic names.

However, both stores use temporary hang-up displays which mount on the end of warehouse aisles and can be used for lower cost seasonal or related-item merchandise as well as special buys at attractive pricing. These display fixtures can be moved from one aisle location to another quite easily and give the store greater display flexibility.

The tool section in Depot’s urban Chicago store is much smaller than in a normal Depot unit, limited to the needs of apartment-dwelling DIYers to a large degree

Another example of spot-item merchandising that was used in Georgia and also is used in Glenview is a small, square roll-around gondola display. Built of wood, two-feet square and painted green (not orange), they can be moved from one area of the store to another. Manufacturers must create their displays to fit this format. In one example, Master Lock’s display was wheeled into the garden area so lock sales could be related to lawn sheds, then later wheeled into the hardware area.

On the ground floor of its two-story Lincoln Park store, the company stocks a reduced inventory of building materials and lumber, targeted at minor repair and replacement needs, not major construction projects such as decks, garages, etc. An escalator and elevators provide access to the second floor, where Depot showcases its new commitment to decorating and design with stylish displays of kitchen and bath remodeling, carpeting, replacement plumbing, lighting fixtures and its newly restyled painting department.

Lincoln Park’s target audience is the neighborhood shopper and DIYer, according to a company spokesman. It is rumored that Depot seeks to open such a store in Manhattan. Other urban centres could be targeted if sales results satisfy.

Smaller stores
With smaller space needs and reduced inventory requirements, this unit, and the small store in Glenview, could enable Depot to continue its amazing growth by entering more urban markets as well as smaller cities where population density to support a larger store does not exist or where zoning regulations and land availability would not permit larger units.

Zoning regulations are what limited the Glenview store to its smaller size. Glenview is 24 miles north of Chicago’s loop and within 5-6 miles of a larger Depot unit. It is surrounded by some 2,500 newly built homes ranging from US$375,000 townhouses to $2.5million single-family homes.

While one might wonder about the ability of these stores to meet sales goals, these two stores actually are approximately the size of the original Depot stores opened in Atlanta in 1979.

In Glenview, which is a one-story store, it is hard to tell any difference from a larger Depot — all the basic departments are in evidence, though quantities of items obviously are smaller, but to the consumer, it is not evident. The building cost and reduced inventory investment should markedly reduce the breakeven point. The Glenview store makes a less pronounced appeal to the professional customer than full sized Depot stores, though it is still putting full emphasis on tool rental.

If this smaller format produces sales as expected, it provides a vehicle for Depot to change its strategy from dominating metro areas, where it has concentrated its efforts, to reach smaller cities which might not be able to support a larger Depot unit. And such a strategy could provide competition to Lowe’s in many of the smaller cities in which it has been operating for years.

With nearly twice as many stores as Lowe’s, Depot is showing more flexibility in its approach to the DIY market than Lowe’s, as it heads into its second 25 years of existence. Bob Vereen, Hardware Journal’s US correspondent.