“We’ve been called a dungeon, mole-hole, mouse-hole…but we always have a lot of fun, which is something you can’t do in a larger store.” So says Gene Manttan of Paddington True Value Hardware.

Paddington True Value Hardware, located three levels underground and abutting a car park in Paddington Central Shopping Centre, inner Brisbane, is one of those stores from the “They said it would never work” school of retailing wisdom.

Paddington True Value Hardware can be found next to an underground car park at the Paddington Central Shopping Centre in inner Brisbane.

Gene and Glenys Manttan opened the successful store in November 1995, and they have had the last laugh on early detractors who suggested their hole-in-a-cave business might attract a Transylvanian clientele. Far from being a stygian outlet providing wooden stakes to black-cloaked shadows, the 180m2 business has become a much-appreciated, fun-filled asset to the large shopping centre community.

The secret, according to Gene, has been to combine professionalism with a touch of humour and genuine care. A few seconds on the phone with Gene is sufficient to reveal the up-beat and jovial character of the store.

External signage provides directions to passers by on street level

Nevertheless, the outlet is unique in terms of its challenges and qualities. According to Gene, he embraced the business on the strength of its position directly underneath a Woolworth’s store: “Everybody’s got to eat,” he says, “so we get a lot of passing trade from people who do their (grocery) shopping and then pass us on their way out”.

Other stores in the complex include a bottle shop, newsagency, chemist and similar retail attractions that complement the supermarket and attract one-stop customers.

Despite dim artificial lighting on the external wall and rather cramped internal displays, the store not only offers convenience but also plentiful parking (386 spaces overall) to customers…“so long as their vehicles don’t exceed 6″”, notes Gene. Larger vehicles must be left about 150 metres from the premises. This level of access has promoted a client base that is 80% consumer and 20% trade.

Apart from heavy vehicle access problems, the store’s small size has also impeded the stocking of larger, trade-oriented items. “I would like to have an area so that we could sell sheeting and larger heavy-duty hardware, however we are unable to do so due to lack of space; we (already) try and use every available square centimetre,” he says. It is also interestingly to observe that about 65% of customers are female, notwithstanding the sunless and potentially gloomy setting.

Underground garden
Whatever space is available is used carefully and with an eagle eye on customers’ buying habits. With 20 years’ experience in the industry involved in both hardware supply and retail enterprises, Gene has an acute appreciation of his customers’ expectations and spending habits. 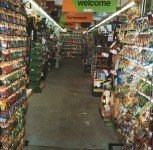 The current stock in the store attracts a high percentage of female clientele; 65% of all customers are female.

He has created an impressive gardening department including plants, “which is not easy when you are in a car park and under the ground,” and has also developed good sales of Bosch power tools. “We have a tendency to up-sell to these tools and other good-quality, eye-catching products.”

Another strong feature of the store is its high-profile name and prominent signage scattered throughout the entire complex. There are True Value signs at street level — complete with arrows pointing straight down — and in every other nook and cranny the centre manager deems appropriate. Gene says that True Value membership is advantageous because of the group’s promotional expertise, while the significant signage exposure encourages people to seek out the store from all parts of the five-level centre.

In most other respects the store enjoys all the other privileges and problems of belonging to a large retail centre. The entire complex recently underwent a 14-month refurbishment program that had a major impact on sales. Gene admits that there were days when access to his store was closed, with inevitable effects on turnover. On the other hand, following an end to the facelift last April-May, business has increased by 37.5%.

Since Paddington True Value Hardware started eight years ago sales have increased by an average 20% per annum, which is reflective of a highly successful niche (literally) business with sound management principles in place. 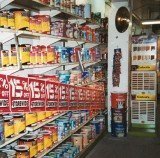 The overwhelming feature of the outlet is its enthusiastic and buoyant customer service, which is both idiosyncratic and warm. While some other underground businesses are cold and lifeless places (think of the shops in Melbourne’s underground train system), this hardware store defeats the shadows with well-stocked shelves, superior personnel including two full-time and two part-time assistants, and an ability to encourage patronage through old-fashioned helpfulness.

Even though the store cannot expand physically because it is flanked by a lift well on one side and building infrastructure on the other, Gene is confident that he can achieve continued growth by offering “personalised, smiley service and friendly advice.” Most importantly, he adds, “we have fun in what we do.”

The success of the business is a silver bullet in the heart of doomsayers who think good businesses require glittering lights, sweeping street frontages and Taj Mahal facades. Good business is where you unearth it.