Figuring there must be other frustrated citizens like himself looking for similar types of products, Gordon started the business from his home in 1980 selling hard-to-find items. Today, the business, now a publicly held company called Restoration Hardware, fills a unique niche in America’s retail hardware landscape. Its 105 stores, operating in 31 states and Canada, offer an eclectic assortment of products — some basic but most of classic designs at affordable (but not cheap) prices.

A typical store front in a Midwestern shopping centre for Restoration Hardware.

In addition to its retail stores, the company sells its products over the Internet and by direct mail catalogues. Combined, the business which grew out of his home is now a $423 million enterprise.

Management concentrates its stores in high income areas in major metropolitan markets where consumers seeking “something different” will find them — and be able to afford the products — in a Restoration Hardware unit. Typically, its stores are surrounded by other high-end specialty outlets such as Williams-Sonoma housewares stores, Hold Everything (which sells all sorts of cabinets and storage items), men’s and women’s fashion retailers, etc.

Unique differentiation
Its basic lines include a smattering of private-brand paint and accessories, unusual household cleaning supplies, etc., seasonal merchandise such as lawn & garden but its primary thrust is finding and offering decorative hardware, lighting, gift items, furniture and even drapes and curtains which can’t be found in other stores — and presenting them in a way that emphasises their uniqueness. 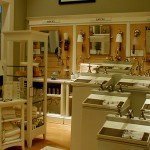 Decorative bath hardware and high end faucets are given special display treatment to emphasise that these are not mass-market designs.

The store’s layout is designed to give lots of personal attention to each customer. And sales per employee exceed $300,000 annually, which is above typical hardware/home centre standards.

Over the years, in seeking unusual furniture items, the company decided to make its own when it couldn’t find what it wanted in the open marketplace. Today most of the furniture it sells is made in its own factory.

Much low-end, basic merchandise is displayed along walls on fixtures like these, totally unlike conventional hardlines stores’ display treatments

Once a stock market darling, 74% of the company’s stock still is owned by institutional investors, but when the stock market bubble burst several years ago, Restoration Hardware’s stock dropped like Internet stocks.

Today, however, it is more reasonably priced. It also refined its merchandising concept over the last two years and appears to have settled on a format which has greater appeal.

From a sales and marketing standpoint, it seems to have a better understanding of its own niche. It doesn’t try to compete in price or assortment with independent hardware stores or giant home centres. It concentrates on attracting consumers (with heavy appeal to females) who want authentic-looking period pieces or stylish, high quality items which will set their homes and decorating apart from that of others.

Being different seems to be paying off.

Lowe’s expansion
As the number two home centre chain, Lowe’s is planning to expand into the Chicago suburban area as it tackles another major metropolitan area in which it has not been a significant threat to Home Depot.

This overall view of most of a Restoration Hardware shows how spacious and open the store is in its product presentations.

Its six new Chicago-area stores will compete with firmly entrenched Menards and Home Depot. Depot has 49 stores in the Chicagoland area, while Menards has 34. Lowe’s already has one store open near Merrillville, a south Chicago suburb. Its first suburban Illinois store opened in St. Charles last June, and stores in Lincolnwood, Naperville, Carol Stream and Lake in the Hills are due this year.

Home Depot opened six stores in Chicago last year and has four more scheduled for this year. A Depot spokesman said the company will probably add more stores to its sizeable base than Lowe’s will have in the entire area.

While SKUs will be somewhat reduced and concentrated on best sellers, consumers will still be able to access, on special order, items which are stocked in its larger metro stores, officials say.

Lowe’s says its standard 116,000 sq. ft. stores cost US$17 million to build and $5 million to stock and generate about $33 million in annual sales. It calculates a smaller store can be built for $12 million, stocked for $3.5 million and should produce sales ranging from $20-25 million, using about 25 fewer employees.

About 25 of the smaller unit stores are to be opened last year. Next year it plans adding 140 units, about half of which will be the small-market stores. Officials say this will open another 150-300 new markets for them. One thing for sure — it will put added pressures on small chains and independent retailers operating in those markets, formerly “safe” from big-box competitors like Home Depot, Lowes and Menards.