The recently opened United Mitre 10 Home & Trade store in Albion Park, south of Wollongong, is designed to be the first of many Mitre 10 stores in the “United” stable…

Vic Arciuli, General Manager of the newly built United Mitre 10 Home & Trade store in NSW, is a man with a plan. 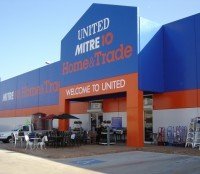 Having just overseen the construction and opening of the store – the largest Mitre 10 outlet south of Sydney – he knows all about deadlines, timeframes, multi-year plans and business growth dynamics. Few elements are “left to chance” under his stewardship.

So the Hardware Journal was interested to learn the rationale behind the store’s size, its interior layout, branding and – most importantly – its role as a stepping stone towards company expansion.

The story of the new multi-million dollar store can only be understood in the context of the business history.

The business grew well, and Vic joined the brothers in 1994 with a mission to explore new business opportunities.

The new store layout has permitted a larger paint department

United Building Products relocated to larger 1500m2 premises in 1996 at Fairy Meadows, and a second store (1,100m2) was developed in 1999 south of Wollongong to provide a service to owner-builders, DIY and general retail customers in that area. That second store also performed well, but as early as 2001 Vic envisaged replacing it with a larger outlet.

The new Mitre 10 store, with 52 employees, an undercover retail area of 3,750m2 and covered timberyard of 700m2, may be viewed as the fulfilment of that dream.

Today the overall “United” business comprises both the new Mitre 10 store at Albion Park and the United Building Products outlet in Fairy Meadows.

Research
“In 2002 we started research regarding site availability for a new store, and we found this site in mid–2003,” says Vic. “It was one of the last areas with highway frontage, and a good location in the central southern suburbs, so we acquired it late last year.

“The decision about sizing was an important one; we felt there was no point replicating a big barn-style store, and our research indicated that we would be better off with something slightly smaller and which wouldn’t be perceived as a mass merchant outlet. So we settled on a model of no more than 4,000m2.”

A private architect was commissioned to design the building shell, and then discussions began in order to determine whether there was value in joining a distribution/marketing group. Vic says numerous meetings were held, resulting in the decision to brand the store as a Mitre 10 Home & Trade outlet. “The final decision came down to 82% local market recognition of the Mitre 10 brand,” explains Vic.

“We knew we wanted to retain our niche ranges of bathroom, door and door furniture lines – our long-term specialty areas dating back to the beginnings of United Building Products – but the floorplan of the new store was effectively carried out by Mitre 10 to incorporate a balanced layout of all departments under Generation 21 guidelines.”

Vic says the interior design has a fairly traditional, early 1990s feel (“We didn’t want to reinvent the wheel”), and utilises a racetrack format around a central display area for seasonal and promotional display space.

All internal aisles are wide and fitted with 1.5m-tall gondolas, whereas all perimeter, wall-abutting shelves are 2.1m tall.

“When you enter the store you can see the entire floorplan,” he says, adding that the rear-store paint department, for example, still makes a visual impact from the store entrance.

Growth
Before opening its Mitre 10 outlet the group had a total retail selling space of 2,600m2. Now that the old second store has made way for the Home & Trade outlet, the total retail area has grown to 5,500m2 and added more than 70% to aggregate monthly turnover compared to the previous year.

Timber customers have the luxury of clear product identification

Moreover, the overall cash spend has almost doubled under the new business structure. Vic says these growth patterns offer tremendous opportunities for even greater expansions. “Over the next 18 months we’ll look at site acquisitions within a 150km radius,” he says. “Our Illawarra region has markets we know and already service well, and we plan to open up three new stores – one per year – from 2007 onwards.”

According to Vic, the new store roll-outs will all follow the model of their Mitre 10 store, with retail areas capped at roughly 4,000m2.

In the meantime, business is going well in all departments and Vic is satisfied with the mix of clientele, though trade custom remains the backbone of overall turnover with a 60% share. The entire region is set to experience residential growth through new estates, and Vic says it is important to cater to both trade and general consumer needs in light of rapidly changing cycles in home construction, renovation and refurbishment.