American retailing underwent a surprising change late last year, when Sears merged with Kmart. Once America’s largest retailer, Sears is today a giant struggling to regain its former glory, with cynics wondering if the merger of the two struggling chains is too little, too late….

Although still formidable at US$41.1 billion in sales, Sears finds relying on its core mall-based stores somewhat out of touch with current consumer shopping habits, so it is experimenting with a wide variety of retailing concepts to restore its faded lustre.

Major appliances are a prominent feature of The Great Indoors

Few realize how complex Sears is. Many consider it simply a mall-based giant with 870 stores featuring dominant private-brand names such as Craftsman in tools and power equipment, Weatherbeater in paints, Diehard in batteries and Kenmore in appliances.

However, the company also operates 1,100 specialty stores of different types – hardware stores, hardware/appliance stores, and franchised dealer stores selling appliances, electronics, hardware and lawn/garden needs, often in rural areas. Indeed, it is this latter concept which returns Sears to small town America, upon which it built its original mail order catalogue business. In fact, Sears is actually a little-known multi-national retailer, one with a strong presence in Canada, plus an international marketing division which wholesales its strong private brands to distributors, wholesalers and foreign retailers, including licensed stores in the Caribbean, South America and some Pacific Islands. It also has a presence in Mexico.

Today – some say belatedly – the company is rushing to embrace the concept of stand-alone big-boxes with Sears Grand and The Great Indoors. Sears Grand is aimed at families with powerful assortments of tools, paints, appliances and electronics, plus apparel and some convenience items. But these efforts are taking place 25 years after Wal*Mart, Kmart and Target began their march across America. 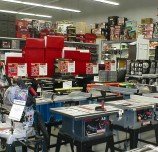 However, with early results exceeding sales expectations by 30%, management is now planning a fast rollout of the Sears Grand concept, and it is expected that Sears will speed up the conversion of some Kmart stores into the Sears Grand format. Meanwhile, The Great Indoors –100,000 plus sq ft monsters aimed at female traffic – are finally beginning to achieve acceptable results. New leadership is expected to restart the store expansion, which stalled after the first 17 units were opened. It is expected that smaller, revamped versions of Great Indoors will occupy some of the second-use facilities Sears acquired.

But Sears Grand and the Great Indoors are only the more glamorous efforts by Sears to re-invent itself. It has labored for more than a dozen years to become a significant factor in hardlines retailing – to capitalize on its powerful Craftsman and Weatherbeater brands. It even purchased the highly successful Orchard Supply Hardware chain, now comprised of 82 units mainly in California. Now Sears is planning a major expansion for Orchard Supply Hardware, planning to double the number of units by 2008, with stores contemplated in California, Arizona, Nevada and possibly also the Pacific Northwest states. There have, however, been rumors that Sears planned to sell the OSH division.

Sears now identifies its stores as selling both appliances and hardware

Its Sears hardware stores began as smaller units, then grew into an average 20,000 sq ft. Today there more more than 160 such units, largely located in metropolitan areas where mall stores also exist. Not satisfied with their performance, Sears is now adding major appliances to their product mix and re-labelling the stores as Sears Appliance & Hardware. Even before adding appliances to the product mix, Sears Hardware stores offered consumers an unusual inventory mix – huge assortments of power and hand tools, but modest assortments of plumbing, electrical and basic hardware needs. Strong garden power equipment and paints were also featured. In hardware, plumbing and electrical, its stores did not offer the ranges to be found in major home centres or even successful independent hardware stores. With the addition of appliances to its hardware stores, Sears has now shrunk its plumbing and electrical departments even further. Focus now is largely on tools, especially floor-model power tools, lawn and garden power equipment, and a year-round patio/grill department. The Kmart merger also causes speculation as to whether cross-merchandising of their brands will work. Will the high-quality Sears brands sell to the budget-minded Kmart consumer? (NB: it will be at least 12 months before any changes from the merger will be seen).

For many years America’s number one appliance retailer, the company’s dominant market share is under attack from Lowes, a longtime appliance retailer, and Home Depot, which added the category several years ago. Today, those two chains present appliances in more than 2,500 locations compared with Sears’ 870 mall stores (and smaller franchised stores.) However, by adding appliances to its hardware units, it gives Sears another 160 locations at which consumers can shop for majors. The company is further experimenting by adding appliances to four Orchard Supply stores. If successful, and rolled out to all stores, this would add another 82 appliance locations for Sears.

The Great Indoors features a broad selection of household fittings

Sears’ franchised dealer stores take its brands, especially in appliances, into much smaller towns than Depot and Lowe would normally enter. In many cases, local appliance dealers (lacking Sears’ pricing clout) are the main competition in small towns. Franchised dealers invest from US$55-100,000 to operate a dealer store. They don’t have to invest in inventory – Sears owns it, and delivers merchandise to the stores twice weekly. Owners make a profit on units sold, as well as commissions on service contract agreements, plus delivery and installation charges. In early November, the company did report strong appliance sales, as well as growing sales at its dealer stores as well as The Great Indoors and OSH stores.

The Great Indoors was Sears’ first venture into one-story, big-box retailing. These handsomely merchandised units are devoted to lines with primary appeal to women or whose purchases are influenced by women – major appliances, bedding, drapes, carpets and flooring, bath and kitchen remodeling, plus some specialty housewares. With 80,000 stockkeeping units, they offer a tremendous selection – more than 300 faucets, 1,000 decorative items, 100 bedding patterns and 200 drapery panels in stock. Its 17 stores are located in higher-income suburbs in 10 states.

The company is now facing competition from Depot and Lowes in an area it once dominated nationally – installed sales. Both home centre chains are pushing installed sales and services. This, for Sears, was a $2.2 billion division last year.

Clearly, with the Kmart merge, Sears is about to make some major changes. The question is whether the new entity can successfully operate so many different formats, and whether those formats can compete against Wal*Mart, Target, Home Depot and Lowes.