There are many expressions that apply to Jenny and Lloyd Maloney’s store management style: “Thinking outside the box”, “Lateral thought” and “Daring to be different” are some apt examples.

As owners of Two Dogs Home Hardware in Merredin, about 300kms east of Perth, WA, the couple have combined group membership with a powerful (dare we say “idiosyncratic”) personal approach to business.

Jenny Maloney, Chairman of Home Hardware’s State Advisory Committee (SAC) in WA and a member of the National Advisory Committee (NAC), is also committed to individual store personality, and her creativity is immediately obvious in the name of the store. For the benefit of those readers who have lived sheltered lives, let’s just say there is a well-known story about Two Dogs…enjoying each other’s company. The connotations may be lost on some people, but for certain shoppers the name inspires a wry grin.

“In 1989 we bought our first hardware store in the town, a 1,000m2 business called Richardson’s Timber & Hardware, and in November 2003 we moved to our new 2,000m2 (and the rest!) premises about 150 metres away,” explains Jenny. “We thought, ‘Why not adopt a new name with the new store?’ and came up with Two Dogs.” Jenny says a rep’s wife referred to Home stores as “Two Dogs” outlets because of the Rusty and Sandy mascots, and so the double entendre name seemed to cover all bases.

In a small wheat belt town of 3,600 residents, being mischievous and strong-willed is just as important as competitive pricing. According to Jenny, the store is now the sole hardware outlet in the local region (having seen off two competitors), and the success of the business has been dependent on a splash of local humour. “For example, our local shire wanted to bring in a new signage policy, meaning that a business could only have one rooftop balloon for 14 days in any year,” says Jenny. “We’re the only business in town to have balloons – two for the two dogs – and my husband wrote an article in the local paper about how we didn’t want to become One Dog Home Hardware. Now people are always making One Dog jokes.”

Artwork in the Loo

The expansive store adheres to an open-plan floor style

Thinking outside the box has also resulted in some unusual features in the store’s, um, thunderbox! Jenny says she realised many customers were driving to town from great distances, and were therefore keen to visit the loo before worrying about shopping. Jenny addressed this need by installing lavatories with walls decorated in Dulux special effects paints. The loos include baby changing rooms, disabled toilets, a music system and even Fine Art paintings sourced from the local gallery. “Our toilets are a real talking point,” says Jenny.

Other innovations include the installation of 10 massive water tanks at the rear of the property to service the garden department. The tanks hold 225,000 litres. The idea has been so successful that CSIRO officials have visited the store to assess its wider implementation in commercial settings. 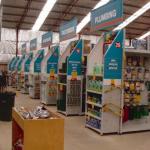 Aisles are clearly identified with strong banners and wide thoroughfares

The storewide innovations go even deeper. In addition to advertising through the Danks catalogue program, Jenny says the business also benefits from TV promotion. “The catalogues have worked brilliantly for us, but we also advertise on TV in those months when catalogues don’t come out,” she says. “We began in the old store and people could see us and our boys – even though we looked like The Sullivans – and our recent ads show the boys all grown up. The viewers have seen us move, grow up and mature and improve our quality, and that’s really important in a small area where everybody knows everybody else. We call 95% of our customers by name. The TV ads work out at $2,000 per month per station.” The store also produces a monthly newsletter, Two Dogs Tales, which keeps the store firmly in the minds of the local community.

Business with a Face
Putting a human face to the business has consolidated customer loyalty and empathy, and personalising the store to suit local conditions (and senses of humour) has been a critical step. Since moving from the old store to the new site the customer balance has shifted from 60% to 50% trade, which Jenny says is vital in a locality where DIY activity is growing. “There just aren’t enough qualified tradespeople, so we encourage DIY as much as possible.” The Laminex Group, for instance, built a display kitchen in the store recently to encourage DIY projects.

Trade clients have access to excellent ranges and expert assistance

Jenny and Lloyd and their 12 staff promote additional DIY activity by providing expert advice to customers. Lloyd, a former builder, plays a particularly strong role in this process. A high level of personal attention, says Jenny, is becoming increasingly valuable now that time-poor clients are opting to make quick visits to stores rather than spend all day traversing big barn outlets.

The store has now become an intrinsic part of the culture of the town, and “Two Dogs” is a name that few local residents can ignore.