A good tradesman never blames his tools – nor does he throw them out. We talk to Frank Ham, Secretary of the Hand Tool Preservation Association of Australia…

There are thousands of people in Australia and around the world who think old tools are as fascinating, beautiful and collectable as coins or stamps. And the number of tool treasure hunters is growing. 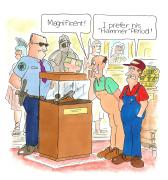 Frank Ham, retired surgeon and Secretary of the Hand Tool Preservation Association of Australia (HTPAA), says his organisation was formed in 1983 in Melbourne and now has more than 300 members from Australia and around the world.

The HTPAA conducts regular meetings, exhibitions and workshops; oversees large tool sales events; maintains a library; publishes a quarterly journal and newsletter; and acts as the official National Trust curator of thousands of historic trade tools made locally and overseas. There is also an informative and comprehensive website at www.htpaa.org.au. Needless to say, this is an “extremely active” historical association.

Frank says the Association was the brainchild of Bill Moss, a former employee of Stanley Tools, who convened a meeting in 1982 to discuss the formation of a tool preservation group. The 15–20 attendees at the meeting were the inaugural members of what came to be known as the HTPAA. Today’s members come from diverse backgrounds: there are professionals, retired carpenters, builders and woodworkers of all kinds. All members share a passion for rare, precious, complete and well-maintained tools from hardware, automotive, engineering and other industries and trades.

One of the Association’s key roles is to preserve and document the tool collection of the late Thomas Caine from North Melbourne (dec. 1968), as well as numerous smaller collections donated by members of the public or bequeathed by their families. The Caine collection, comprising about 1,500–1,800 items, is the backbone of the HTPAA’s 3,000-tool miscellany. Ranging from planes and hammers to saws, wrenches, rulers and even surgical instruments, it is hard to imagine a tool category or sub-category that is not represented in the inventory of archived items. Almost all items are stored in a National Trust property or in members’ private premises, however the Association is desperate to find a headquarters of its own – preferably in metropolitan Melbourne – to showcase its extensive collections and form a meeting centre for members. Any retailers interested in hosting a readymade tool museum are welcome to contact Frank any time!

The Collections
“We have a particular interest in Australian-made tools,” says Frank. “We have a very large collection. Not many tools were made in Australia before WWII because we imported most of what we needed from the UK and USA. But after the war there were shortages and we couldn’t get imports, so for 20 years from the late 1940s through to the 1960s we made many tools in Australia.”

Brand names featured in the Australian collection include Carter (which was based in Sydney), McConnell (a Queensland inventor specialising in planes), Kennedy (plane maker), Bergs (plane makers), Falcon-Pope (planes and general tools) and Stanley Australia (makers of diverse tools, and still going strong).

“In our general collection we have some very old and valuable items,” says Frank. “For example, we have an Austrian coachmaker’s plane that is about 150 years old and worth about AUS $2,000 – it may be the only one in Australia. My own specialty is rules and measuring equipment, but I also collect tools and planes made by Edward Preston before the company went out of business in the Great Depression.”

The main collectable category relates to woodworking. Frank says this sector outranks engineering or any other sector, and planes are particularly prominent in the minds of collectors. “Planes are more complex tools and obviously more likely to be preserved,” he explains. “If you buy a saw and sharpen it regularly eventually there’s no more blade; if you buy a chisel and sharpen it for 30 years you get a 30-year-old handle. But planes just don’t get thrown out.”

Characteristics of note to collectors include scarcity, exotic materials and condition. “If you consider planes, most of them up to the end of the 18th Century were mostly made from wood, but then in the 1820s the US began to make metal planes. The main reason is that in the early 19th Century the US began to manufacture guns with very tight metalworking tolerances, and making interchangeable parts possible. Companies like Stanley started in 1859.” The most attractive planes have magnificent handles of exotic woods like ebony and rosewood.

Other goods of high value in the collection include British-made planes from companies like Thomas Norris or Spiers.

At the other end of the size scale, Trewhella Bros of Trentham Victoria made jacks for tree clearing. A Trewhella tool catalogue of 32 pages will be issued to members later this year.

While tool auctions in Australia have never had a fanatical following, worldwide markets are growing – and impacts are sure to be felt locally in the future. Frank says the highest-ever price paid for a tool was at auction in the USA, when an ivory and ebony plane made in the USA a century ago sold for $US $114,000. Other big-ticket tools have sold for $US 94,000 and US $50,000 respectively.

Become a Member
Whether your interest in collectable tools is pecuniary, practical or aesthetic, the HTPAA has plenty to offer members – annual subscriptions cost $35. General meetings are held every second month (January, March, etc) at 7.30pm at Box Hill Community Arts Centre, 470 Station Street, Box Hill, in Melbourne, and members also receive quarterly issues of The Tool Chest journal, as well as newsletters outlining major events. Biennial conferences are held in Melbourne, with the next event scheduled for March 2006.

Members also have access to publications produced by the HTPAA. Past editions include a John Danks & Son Tool Catalogue (1913), a Dawn Products catalogue (1917–1946) and a Directory of Australian Tool Manufacturers. For more information call Frank Ham on (03) 9817 1768 or visitwww.htpaa.org.au.