Two publicly-owned specialty retailing chains – Bed Bath & Beyond and Linens ‘n Things – are fighting hard to be the dominant player in America’s housewares/homewares business. In so doing, they have become competitors to hardware stores and home centres on a number of key items.

Caption: A Bed, Bath & Beyond store in a power strip centre

Both companies target middle to higher-income consumers in suburbs or big-city locations, both operate cavernous stores filled with awesome merchandise assortments, and both emphasize everyday low prices, but actually operate with gross margins of more than 40%.

With hardware stores and home centres recognizing the important role of women shoppers and trying hard to court females, their efforts now bring them head-to-head with these chains, both of which are very successful in attracting female consumers.

In addition to broad ranges of homewares, both chains also sell bedding, towels and other soft goods such as curtains and draperies, which obviously are products purchased largely by women. It ensures female traffic for them. In some cases, these two chains offer powerful departmental assortments comparable to those of home centres and hardware stores – drapery hardware and bath accessories as two examples. In other cases, the two chains are more item-oriented in their sales approaches, but in total, they are stocking dozens of products found in home centres and hardware stores. Some of the goods they stock include batteries, bbq accessories, bathroom accessories, electrical accessories, shelving units, door mats, door and window alarms, laser levels, fans and storage products. The two chains recognize that the housewares business is highly fragmented, with department stores going after the same high-income customers they do. Mass merchandisers such as Wal*Mart, Target and Kmart go after lower-income customers selling more basic assortments and operating with much lower gross margins. In addition, they also recognize that chains like Lowes and Home Depot are now going after female customers, and that drug chains and dollar stores are carving out some additional housewares volume on basics and lower-priced items in their smaller “convenience” outlets.

Yet the two chains differ in at least one significant way. Linens ‘n Things operates three of its own distribution centres, which feed its retail units, while Bed, Bath & Beyond asks manufacturers to ship directly to each retail store, although it does allocate about 10-15% of each store to reserve-stock warehousing.

However, it is in their merchandising techniques that the similarities are so amazing. Each operates large stores ranging from 20,000 sq ft to 50,000 sq ft, and both groups of stores use a racetrack layout, with merchandise “alcoves” off the racetrack. These alcoves contain broad merchandise categories such as drapery hardware, bath items, tableware, cookware or cleaning supplies. The alcoves serve as departments within the broad homewares category. The wide racetrack aisles are used for short-term promotional values or to introduce new or seasonal lines on special fixtures. 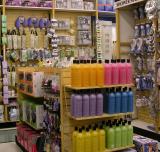 With high ceilings (15 ft or more), the stores are merchandised right to the ceiling. The effect – to impress consumers with breadth of inventory – apparently works well, as the presentations of product are far more dominant than those of most home centre, department store or mass merchandiser competitors.

One big difference between these two chains and their male-oriented competitors is the cleanliness of the stores. No dusty merchandise or scuffed fixtures or aisles, which makes these units especially attractive to female shoppers.

Linens ‘n Things differs somewhat from its competitor by offering much wider aisles and a less crowded sales floor.

A Closer Look
Bed, Bath & Beyond is the larger of the two, operating 660 stores in 44 states plus three in Puerto Rico, and churning out $5.1 billion in sales. Several of its stores exceed 80,000 sq ft in size. It also operates two smaller chains – a 26-unit chain in seven states selling Christmas items and a 35-unit chain in three states offering health and beauty care items. These two chains each operate a small distribution centre. Total retail footage is 21.7 million sq ft. It also enjoys the highest gross profit, 42.5%, which seems hard to reconcile with its EDLP promise of always competitive prices. It achieved 15.8% net profit before taxes. It says it has 3,700 suppliers but its 10 largest suppliers account for 21% of its purchases.

Caption: Promo aisles like this in both chains call attention to seasonal and new items

Linens ‘n Things operates 492 stores in 45 states and five Canadian provinces. It operates 16.7 million sq ft of retail space. Its sales volume last year was $2.66 billion, of which $124 million was from its Canadian stores. While its gross profit is healthy at 40.3%, it just doesn’t match that of Bed, Bath & Beyond whose net profits were $97.9 million. Linens says it has 1,200 suppliers and is using electronic purchase orders to get merchandise shipped to its three distribution centres. Selling, general and administrative expenses also are comparable – 27% for Linens and 29.1% for Bed, Bath & Beyond.

While both enjoy high gross margins and enviable sales per store, they fail to post high sales-per-square foot or impressive stockturns. The slow turnover is easily explained, however, when one looks at any of the accompanying pictures and sees floor-to-ceiling stacks of merchandise spread throughout these large stores. Linens ‘n Things says it carries $42.82 in inventory per sq ft.

It seems quite obvious, however, that these mass display techniques convey to consumers an image of good value. Certainly, they imply a huge assortment, and the broad range of items encourages browsing and repeated store visits. With their packed sales floors and crowded aisles, the stores entice women consumers who love to browse and/or are searching for “something new and different.” Both stores concentrate on better quality lines and well known brand names. Their target customer looks for good quality as well as good value. With their EDLP devotion, neither chain is a weekly advertiser, though both occasionally use full color, multi-page newspaper inserts to emphasize seasonal marketing opportunities, such as back-to-college dormitory outfitting or June bridal season.

For more information about the stores, go to:
www.bedbathandbeyond.com and www.lnt.com. Other retailers may find some useful ideas by checking out these two web sites. Linens ‘n Things recently began enabling customers who buy on-line to pick up purchases at a nearby retail location.