The Barrow & Bench group in South Australia is one of the most successful hardware operations in Australia. With two very successful Mitre 10 Solutions stores to their credit already, they added a third store to their collection two years ago – the Mitre 10 Handy store in Happy Valley.

History
The first Barrow & Bench store opened for business almost 30 years ago, in 1978 at Unley. The store was a joint venture between the Stewart and Coote families. In August, 1982, Barrow & Bench joined the Mitre10 Group and in 1984 the Stewart Family, having purchased their partners’ interests, became the sole owners of the Barrow & Bench outlet.

In 1987 Barrow & Bench expanded, opening a second store trading as ‘Glenunga 7 Day Centre’. After trading for ten years from quite a restricted location, the Glenunga outlet relocated to much larger premises at the old Bi-Lo site in Glenunga. The Malvern store relocated to larger premises in Unley, formerly occupied by Fairway Ford, in October, 1999, after completing major reconstruction of the premises. Now, the baton has been handed to the second generation of Stewarts – brothers Michael and Paul – who are the Senior Managers of the Glenunga and Malvern stores respectively. In February, 2004, Barrow & Bench opened their third store located in the Happy Valley Shopping Centre. A Mitre 10 store had previously been operating on that site but the store was tired and in need of a revamp, so prior to opening, Barrow & Bench completed a major upgrade. This store is managed by Richard Haynes, who was transferred from the Malvern store. Every few years some progression has taken place, whether it is a store relocation, a store upgrade, or a new store. Mike Stewart from the Glenunga store believes a regular upgrade keeps the business fresh and up to date.

Straight On Board
When the Mitre 10 Generation 21 concept was launched in 2001, Barrow & Bench quickly seized the opportunity to transform their Malvern and Glenunga stores under the new livery of Mitre10 Solutions. It meant a complete renovation with new logo, new colours, new fixtures and fittings. The ranges were completely reviewed and more uniformity was introduced. All the design work was provided by corporate Mitre 10 and the result was a much improved store layout, which made it easier for customers to navigate the store and find what they need. According to Mike Stewart, the impact of the conversion on store trading has been tremendously positive and he can’t understand the hesitation some Mitre 10 store principals have in converting their stores to Generation 21.

The Ian Nisbet Award
The prestigious Ian Nisbet Award is given each year to the best Mitre 10 store in Australia. Coveted by every store in the group, it is the highest accolade a Mitre 10 store can receive from within the group, and Barrow & Bench Mitre 10 Solutions Glenunga has won the award twice in the past three years. Adding to their award-winning performance, the store won Store of the Year (1,000 to 2,500 sq m category) at the South Australia Hardware Association Awards, held in November, 2005.

Caption: Ladies Nights are a regular fixture at Barrow & Bench

When asked to what he attributes the success of his store, Mike is proud but humble. “The Malvern Store has won plenty of awards over the years including State Store of the Year. It’s just that Glenunga has been in the spotlight lately. If I had to pinpoint one particular strength that contributes to our success, it would have to be customer service.”

Hardware is in Mike’s blood – he became involved in his Dad’s shop when he was about 14, putting stock on the shelves in his school holidays and has been working full-time in the business for the past 15 years. “We are very involved with the local communities surrounding all our stores. Whether it’s supporting the local footy, tennis or bowling club or supporting local Junior Landcare initiatives, it keeps us in touch with our customers and gives us an opportunity to put something back into the local community,” said Mike. The three Barrow & Bench stores differ in size with Malvern their largest at around 2,000 sq m, Glenunga at 1,500 sq m and Happy Valley at 900 sq m. Both Malvern and Glenunga are very close to the city of Adelaide, both being only about five kms from the CBD and Happy Valley is approximately 20kms from the city centre. Store sales in the Malvern and Glenunga stores are broken down to roughly 90% consumer retail, with trade accounting for only about 10%. 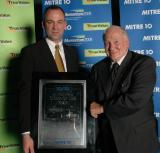 Caption: Mike Stewart accepts the Ian Nisbet Award from Ian Nisbet, one of the founding fathers of Mitre 10

“We operate in a competitive market but competition is what you make of it. We keep an eye on them but it doesn’t consume us. We prefer to be leaders than followers – they do what they do – and we just have to do it better. Once customers have tried ‘big box’ shopping on for size, they seem to be coming back to our stores for good old-fashioned service and expert advice. We have also noticed an increase in our female customer base, who appreciate a more pleasant shopping environment and knowing they will get ‘all the help they need’ from us.”

Good Staff Equals Good Service
There are many aspects of running a successful retail business, such as having the right stock at the right price and in the right quantities, displaying it well, having clear store signage and good housekeeping standards, to name a few.

However Mike can’t stress enough the importance of having great staff and looking after them. Collectively, the stores employ more than 100 people. “You have to build a strong team, it is the underlying foundation for any successful business and you don’t have a business without a committed staff. We have a terrific team in all our stores with many long-serving experienced people and first-rate managers. There is a great sense of camaraderie among the team and we enjoy an environment of high morale, and that is reflected in their professionalism,” explained Mike.

It is not all work at Barrow & Bench, there are plenty of opportunities for mixing in a relaxed, fun environment, such as the recent ‘Beer & Bowls’ night Mike hosted to celebrate Christmas with the staff and families from all three Stores.