Millions of Americans whose homes and businesses were damaged or totally destroyed by three destructive hurricanes last year are still struggling to return to a normal life. However, they are being aided daily by the heroic efforts of hundreds of hardlines retailers, many of whom lost their own homes or businesses.

Caption: Wouldn’t this be a clean-up task?

Throughout parts of Texas, Louisiana, Mississippi and Florida, independent and chain retailers almost immediately began helping consumers and other businesses to re-roof buildings, cut up downed trees and clean up huge piles of rubble. Working with their suppliers, they obtained tens of thousands of extra generators, chain saws, tons of roofing materials, plywood, lumber and other building materials, as well as huge quantities of disinfectants, brooms, shovels, five-gallon buckets and other vital clean-up and repair items.

The story behind the scenes is one of extraordinary courage and commitment by the owners and operators of hardware stores, lumberyards and home centres to their communities and customers. Aiding in these efforts were area wholesalers supplying the independent retailers, who rushed immense quantities of basic clean-up supplies and rebuilding materials to the stricken areas, often getting material to retailers ahead of federal and local relief efforts.

Caption: The water line at Otto Hebert Lumber…think of the damage inflicted inside the store

While New Orleans was the most devastated area, as widely reported worldwide, other smaller communities also suffered terrible damage, in some cases wiping out entire cities or business districts along the Gulf coast. Flood waters as much as 10 feet high penetrated inland 30 miles or more in some cases. In New Orleans, more than 50,000 homes and businesses were so severely damaged that they must be totally demolished. A massive rebuilding task that is likely to take years, not days or weeks.

Typical of the heartwarming stories is that of Susan and Todd Boudreaux, owners of Savoie Lumber in Creole, Louisiana, whose entire building was torn apart, moved off its foundation and inundated with mud. Within a day or two, they salvaged what they could, and began supplying customers with repair and rebuilding needs. Their own home, as well as that of Susan’s father and sisters, had also been totally destroyed, yet they put their own concerns aside to help customers restore their own properties. Susan’s husband and father found some corrugated metal and hastily constructed a 20 x 30 feet structure to house what little inventory could be salvaged from the store’s pre-hurricane stock.

Coming to their aid, Hardware Distribution Warehouses of Shreveport, Louisiana, planned to send a specially-loaded trailer of needed supplies. It was packed so that each side of the trailer could serve as a “store”, with the centre area as the shopping “aisle.” When sent from the warehouse, the centre aisle was loaded with PVC pipe, which could be off-loaded and stored on the ground. When the truck was empty, a new one was sent on its way and the driver would return the empty one.

While hundreds of stores were damaged to varying degrees, the hurricanes also damaged or destroyed the homes of thousands of store owners and employees. Lowes, the nation’s second largest home centre chain, said that homes of 1,300 of its employees suffered damage. The company set up an Employee Relief Fund, and agreed to match the donations of other employees. By mid-November, more than US$1.6 million had been collected to aid stricken employees. Home Depot recently announced an additional US$3.25 million cash donation to relief, recovery and rebuilding efforts.

How bad was it?
Just how seriously were retailers in the area affected? Here is a company-by-company rundown and update as of mid-November, 2005.

Ace Hardware – About 100 of its member-owners were affected, including 14 in the New Orleans area. A few of those are now open, at least partially, but several there and along the Mississippi coast were totally destroyed and will not re-open. A few more expect to re-open in the next few months.

Caption: What a hurricane looks like as it approaches

Do-It-Best – This dealer-owned wholesaler said 35 of its members were severely damaged by Katrina, but only one was still closed more than two months later. All had been closed for shorter periods. Rita, the hurricane which hit shortly after Katrina, affected another 25 stores. All but one are now open. When Wilma hit Florida, it damaged some stores but all were soon re-opened.

Hardware Distribution Warehouses – This Louisiana-based wholesaler sent several of its executives on a 1,400 mile trip through the affected areas in three states in order to marshall its resources to assist customers. In the process, it channelled hundreds of thousands of dollars of needed supplies to affected areas, in order to help rebuilding efforts.

Home Depot – One of its stores in New Orleans is still closed. About 50-60 stores shut their doors in anticipation of the hurricanes and began stocking up on basic rebuilding needs and were able to re0open promptly. Depot began hiring several hundred people to work in their stores, replacing those who were moved out of the area. Those displaced by losing their own homes were offered jobs in Depot stores in the new locations they were moved to. Depot officials said this was one way they could try to help their staff by assuring them a job. 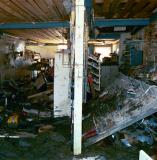 Caption: This is Savoie Lumber after Katrina hit

Lowes – Katrina affected 35 stores, which were closed temporarily or had reduced hours. Most reopened within 24 hours but one store in New Orleans was closed until last month. Rita affected 55 stores and Wilma closed 17 stores temporarily. Lowes reacted swiftly, establishing an Emergency Command Centre before the hurricanes hit, so that the company could respond quickly once the hurricanes moved on. The company also cooperated with the American Red Cross to assist hurricane victims and allocated US$2 million to match Red Cross donations. A total of US$8.4 million was raised this way.

True Value Hardware – About 40 retailers, like those of other wholesalers, suffered varying amounts of damage. Seven, all in the New Orleans area, are still not open. The company rushed extra quantities of needed goods, such as generators, etc, into the area as soon as roads were passable. Two of its field people are still dedicated to helping those in the affected areas.

Orgill, Inc – This national wholesaler shifted merchandise from other distribution centres and worked with manufacturers in order to rush 47 additional truckloads of needed merchandise to retailers in the affected areas. 22 of its members suffered substantial damage, others lesser damage. Those severely damaged managed to find temporary locations so they could supply needed products. All those severely damaged are rebuilding.