Bob Vereen reports on a novel, yet effective, promotional concept…

For a number of years, American hardware and home center retailers have been conducting a certain type of sale that has proved to be very successful. This idea could be used by readers of this magazine, if you are not already using it. 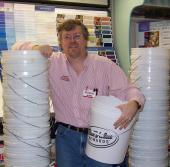 Caption: Owner John Fix holds one of the plastic buckets he normally sells, but which he gave to coupon-bearing customers so they could fill the bucket and earn an extra discount

Best of all, the concept is remarkably simple – all one does, is provide customers with either a big, brown paper bag – or a large plastic bucket – and give them a discount on everything that can be fitted into the bag or bucket. Discounts vary by retailers – some offer as little as 15%, others a discount of as much as 25%. Retailers do sometimes put some restrictions on what can be fit into the bag or bucket – such as items already being sold at a sale price. When retailers use paper bags, they have them imprinted with a huge discount percentage, plus any restrictions that might be imposed, and, of course, in large type, the store’s name, address and sometimes phone number. The bags can be distributed via newspapers or customers can pick them up in the store.

Caption: Cornell True Value’s store front – while waiting for a new permanent sign to be delivered

Menards, America’s third largest home center chain, a privately owned firm with 200 plus units, used this paper bag promotion for a five-day period in September last year, offering a 15% discount. Another retailer who has used this idea several times is John Fix III, owner of Cornell’s True Value Hardware in Eastchester, NY, a suburb north of New York City. In his case, he gave each coupon-redeeming customer a free white plastic bucket in which they could put the items they selected to earn the discount. He limited the exceptions to his discount offer to just two categories – power tools, which have short margins to begin with – and to items already on sale. Because he is fully computerized, John has been able to track the sales results and his experience could help readers determine if they should try this idea, too. While some dealers print their sale-price discount on paper bags distributed with local newspapers, thus reaching every subscriber in the marketplace, chose to limit his promotion by mailing a coupon to the top 30% of customers using his Customer Reward cards. These, he has found, account for about 70% of the total sales volume he makes from nearly 10,000 Reward cards he has issued. The sale can be run for a one-day period or over a weekend, but John chose to make it a four-week sale, beginning September 26 and expiring October 22, 2005.

He mailed 3,200 coupons out and had 454 redemptions, with an average transaction of $45.62. The promotion generated gross sales among those customers of more than US$20,000 in the four-week period. He also ran the sale in May of 2005, and had similar results with a 12% redemption and a slightly higher average sale of $47.85. Here are weekly results of the Autumn promotion:

There was no mention of the bucket sale in-store. He placed a stack of buckets near the front door, but gave no other indication that anything special was going on. John did not provide coupons to customers who asked, unless someone said they had lost their coupon. In that situation, employees verified that they were a top customer and gave them the bucket deal.

Caption: The coupon mailed to some of Cornell’s customers

John further explained: “I dislike in-store offers that are given to anyone who happens to wander into the store that day. Those ‘walk-ins’ are ready and willing to pay full price for their needs, so why disappoint them?” At the time of the bucket sale, he said the store had about 50 items on sale and they all required True Value Rewards membership to get the pricing. “I’m sending them to my best customers, in order to maximize the impact of my advertising dollars,” he explained. “I want to give the best prices and best offers to my best customers. If the mailing was free, I might have mailed to a wider selection of customers.”

John finds this type of sale increases his normal store traffic, but said the most interesting aspect is that customers walk through the store carrying their buckets – checking his stock thoroughly to see what they might want to buy and fit into the bucket. “They never browse so thoroughly on their own,” he said. John can’t be sure, but he strongly suspects the average shopping visit is considerably longer than a normal shopping trip to his store.

From the customers’ viewpoint, this promotional idea is attractive. “It offers customers a lot of flexibility. They choose when to shop and what to purchase.” John also likes it because he does not have to stock up on a few dozen featured items from his wholesaler’s advertising circular. Purchases are made from regular stock being sold at regular prices, less the announced bucket or bag discount.

Caption: Two checkouts at Cornell’s Hardware, which is on computerized item-inventory control

“We also did a mailing to 100% of our customers with the True Value regional group and I’m interested to see what the response rate is by customer category, as I find that mailing to the ‘bottom feeders’ is not very productive. Not only do they respond poorly to offers, but they tend to cherry-pick the items so even when they do come in to shop, the margins on their purchases is much lower than to our top customers. Once the last part of the regional mailing offer is completed, (a 50% off coupon for 11/5) I’ll know the results for that mail-out and I’ll know if my analysis of customer response is accurate.”

There’s another advantage to his bucket sale. The buckets he gives out free when customers bring in the coupon for redemption, are imprinted with a big, bold, True Value logo on one side, and his store information (name, phone, address) on the other. “It’s always helpful to have our store name in a customer’s garage, workshop or basement where they and others are sure to see it day after day.”