Home Depot is opening smaller stores in smaller communities in both the US and Canada. Bob Vereen reports…

With more than 1,800 giant stores now dominating most metro suburban areas in both the US and Canada, Home Depot is beginning to target much smaller communities as it attempts to continue its amazing 25-year growth record.

It already has opened several urban stores in the US and now is targeting Canada.

In the last nine months, it has begun opening stores in towns with as little as 10,000 population. In these smaller markets, stores are around 60,000 sq ft, about the size of the original Depot stores opened in Atlanta 25 years ago. Currently, metro stores are about 100,000 sq ft in size. It is even testing a 40,000 sq ft format in Canada, which, if successful, might be coming to the US. 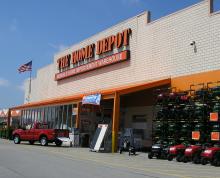 One thing this means is that hardware stores and building material dealers in these smaller towns, as well as appliance dealers, will be facing more severe competition than they’ve previously known. One factor in their favor is that Depot has steadily been increasing gross margins under its new leader, Bob Nardelli, and is now averaging almost 32% chain-wide, whereas its early margins under founders, Marcus and Blank, were about 25-26%.

It first experimented with a smaller format in a Georgia location and then in Glenview, a Chicago suburb, where zoning regulations forced it into a smaller footprint of 70,000 sq ft. The Glenview store undoubtedly served as a good testing ground. It contained all of the regular Depot departments – simply smaller in size. Lumber/building material space was the most condensed, and in Glenview, less attention was given to professional business, but in smaller cities, the company will undoubtedly have to rely more on such business to meet sales goals. Urban stores are another growth vehicle for Depot. It now operates smaller, multi-floor stores in Chicago, New York and Vancouver, British Columbia. Mike LaFerle, the company’s VP of real estate, explains that in metro areas the company is seldom able to find 11 acres of developable property for a regular store, requiring it to be creative and “go vertical.”

In its urban stores as well as in newer, regular-sized stores, the company is giving more attention to décor merchandise. Its paint department is upgraded, even though warehouse racking is still used. Presentation simply has a “softer” look because the company is recognizing the important role females play in decision-making for this category. The softer look is even more pronounced in its presentation of carpeting, cabinets, etc.

What kind of competition is Depot facing in these new markets? Batesville, Arkansas has four hardware stores and two lumber/building material dealers. Canon City in Colorado has 5 hardware outlets, including two selling some lumber/building materials. Each of the cities also boasts a Wal*Mart Supercenter, giant stores of 200,000 sq ft which sell paint, hardware, tools, and some electrical and plumbing items, in addition to a full range of food products. Lowes, Depot’s major competitor, actually began in smaller towns and only after Depot began growing so rapidly, did it revise its format and strategy to open in metro areas with large stores like Depot. Its growth in smaller towns, however, was largely limited to the southeastern states and southern part of the Midwest.

None of the markets in which Depot has opened these smaller stores is faced with any nearby Lowes (or Depot) competition. Each city is about 40 or more miles away from any larger city. From an economic standpoint, each of the new markets boasts a strong economic base with some local manufacturing employment. Each city is the largest within a 10-15 mile (or more) radius, so will likely attract customers from a wider range than in the metro suburban areas in which Depot has been operating for decades. The Wal*Mart supercenters in each of the cities are already drawing out-of-towners to these cities, and the addition of big-name Home Depot stores will make these towns an even more important shopping destination for out-of-towners.Depot’s LaFerle also says that the company is doing some relocations of existing stores, trying to upgrade to better sites. It has been doing about five a year recently, but will be relocating 10 stores in 2006 and between 20-30 in 2007, all measures to keep its sales increasing at a high rate, which is tougher and tougher to do on its ever-growing sales base. The upshot is that Home Depot is displaying considerable flexibility as it seeks to continue its amazing growth record.