Jake Tyson has gone from carpenter’s apprentice to one of the Australian tool industry’s biggest success stories. Elizabeth De Friestreports…

“Now it’s becoming fun, especially with the feedback. It’s an awesome feeling to hear people telling you how great your tools are.”

Hindsight is indeed a wonderful thing, and if Jake Tyson, the ex-carpenter’s apprentice and force behind Redback Tools, could see where he is now, it would have made the past few years a lot easier to take. But no-one can forsee the future. Instead, it takes a fair amount of drive through uncertainty to push things along. 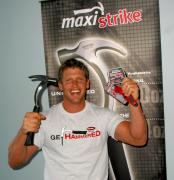 “I got a lot of, ‘You’re a dreamer’, from everyone, even my parents,” said Jake. “But I knew I could do it, provided I could find the necessary help. Although, I can understand why my family thought it was a bit of an impossible dream.”

Obviously, this story has a happy ending…but first, let’s start back at the beginning. “At 16, I was sick of school. I couldn’t see the point, and felt as though I was wasting my time,” explained Jake. “My father was an engineer and I’d always been a hands-on type of person, making things in the shed, so it was a logical choice to become a carpenter.” Being an apprentice, Jake found himself spending a significant amount of time hitting down on rafters, floor joists and form work. “I don’t think I’m the first person to discover the neck of a standard hammer needs some extra clearance, so you don’t have to go back with a nail punch to finish off. So, one day I went home and ground out the front of the neck on my Estwing and welded more onto the back. The balance was a bit weird, but it could get to the spots I wanted.”

The reaction from others was encouraging enough for Jake to get a patent for the Maxistrike in Australia and look into having some prototypes made. However, at that time, he couldn’t afford it, and let things go. But then a motorcycle accident changed everything. “I was in hospital for five months, and in and out for the next two to three years. It was obvious I wouldn’t be able to do what I used to, so I did some thinking and decided to study up and push this hammer thing along.”

With the money Jake was awarded in compensation, he had prototypes made up. “Not only did we get the balance right, but we discovered that our 20 ounce Maxistrike had the striking power of a 24 ounce and more – it’s incredibly efficient in transferring energy to the striking point as opposed to reverberating up the arm.”

Caption: The Maxi Strike hammer is engineered for superior balance and feel

At this point, Jake took his hammer to the big players in the tools industry. “I had a couple of opportunities to sell the rights, but I knew they’d just put my hammer in the bottom drawer and it would never get out there.”

By now, all the money had been spent, so Jake went back to work as an account manager selling building supplies. One thing led to another and he moved into a better job where he met someone who would be the catalyst in getting the hammer back on the agenda.

“One day and I decided to tell him that I wasn’t planning to make a career where I was, but that I had other ideas. After quizzing me for an hour or so, he admitted he’d had enough too and wanted in. The following Monday he showed me his letter of resignation so we drew up a contract.”

Two heads are better than one – (“Anyone who says they’ve done it all on their own is full of it”) – and now Jake was able to focus on marketing and sales while someone else was taking care of manufacturing.

“I went to the United States for some research, to spot the mistakes before we made them ourselves.” The trip was useful but as Jake puts it: “You always end up losing money to learn what not to do”. In fact, it was a steep learning curve. “You can study all you want but it’s a whole new world when something hasn’t been done before. What we did discover was that it’s easy to launch a new product when everything is set up and the brand awareness already exists.”

Caption: The Maxi Knife is lightweight yet super heavy duty

However, all the hard work did pay off so that in February, 2003, the first Redback MaxiStrike Hammer went on sale in Australia at Bunnings. Sales were slow to start, but really picked up as word began to spread. “You can have the best product in the world – and we’ve made sure the quality is the best – but if no-one knows it exists, it’s not going to sell.” That’s partly why Jake took the time to promote the Maxistrike directly to major building sites around Australia, prior to the Bunnings release.

“It’s a tough time, when you have no money and the arse is hanging out of your pants. You get some gravel rash, then you develop some calluses and you don’t feel it anymore. In a way, it makes you want to push it even harder. And it’s paid off.”

You can read more about Jack Tyson in the February issue of the Australian Hardware Journal.