Taffa’s Mitre 10 started as a family business. More than 50 years on, it still is. Pauline Hoogen reports… 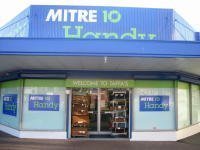 Taffa’s Hardware was originally founded by Ron Taffa and his sister, Cherie Shear, in the Sydney suburb of West Ryde in 1955. Ron soon became a well-respected businessman in the local community and a member of the Hardware Retailers Association of NSW, serving on its board for a period of time. As Ron pointed out, the hardware landscape was very different in those days. “There were plenty of independents, two or three in virtually every suburb. With the limited buying power of a single store, these independents weren’t able to enjoy lower prices and the best deals the manufacturers dictated,” he said. Recognising that if they all joined together to form a buying group, the members of HRA (NSW) could negotiate much keener prices and better terms with manufacturers.As a result, the HRA Wholesale Co-operative was formed. The HRA members were now in a position to buy their stock at more realistic prices and pass savings on to their customers, whilst maintaining their independent status. 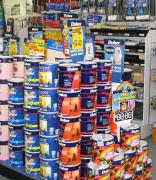 Caption: A display in the paint section

Still something was missing. How could they communicate the message to their customers? Some of the more astute and progressive retailers in the group, Ron being one of them, got together and, in consultation with Leo Burnett – one of the largest and most successful advertising companies in Sydney at the time – launched their own promotional group called the Hardex Hardware Group. The name Hardex was chosen to denote the group as hardware experts. Ron Taffa launched the group in 1976 and became its founding Chairman. The Hardex Hardware Group worked as a promotional vehicle producing catalogues and advertising material for its members. However, as membership grew, and as time progressed, some members wanted to reduce the amount of advertising and promotional activity undertaken by the group.

New Blood
In 1980, with Ron wanting an increase rather than a decrease in promotional activity, he took the decision to leave the Hardex Hardware Group and join Mitre 10. Taffa’s Hardware became Taffa’s Mitre10 and they haven’t looked back. “Mitre10 provided buying power and a fantastic marketing program and I thought, if I don’t join Mitre 10, they might open one in my suburb anyway,” Ron explained. In 2004, the store undertook a Generation 21 conversion to become Taffa’s Mitre 10 Handy. Two of Ron’s four children, Anthony and Julianne, joined the business in a full-time capacity in the mid-1990s and have taken over the management reins from Ron, who with his wealth of knowledge and experience, is still a very vital part of the store’s day to day activities. Ron’s two other children, Victor and Catherine, have pursued their own careers outside the business and Ron’s sister, Cherie, is enjoying the spoils of retirement.

It is perhaps fitting that a second-generation brother and sister are now running such a successful store started by a brother and sister team. “We get along well and make a good team and we had a great teacher. “Dad is amazing and even though he is approaching 78 he has welcomed new challenges and embraced technology. We spent our school holidays working in the shop and I think it has certainly helped Julianne and I understand the business better. Hardware is in our blood and has always been a part of our lives,” Anthony said.

Award Winning Performance
Taffa’s Mitre 10 Handy was awarded the NSW Hardware Industry’s Store of the Year (under 500sq m) in 2004, followed by Mitre 10’s NSW Handy Store of the Year awarded at Mitre10’s 2005 Conference.Both of these awards are a testament to the fantastic business the Taffas run. Anthony credits his father Ron with much of the store’s success. “Dad is a real innovator, always looking at how we can improve the business. In the 1970s Ron expanded the store, increasing the size of the lower level and adding a second level. We’ve always been careful to provide a well-organised, well-presented, attractive shopping environment for our customers and the conversion to Handy has ensured this will continue,” explained Anthony.

Caption: Part of the Garden section of the store

When asked if the conversion has had a significantly positive impact on sales, Anthony was a little hesitant. “It’s hard to say really because we have been trading under such difficult circumstances for the past year. The Woolworth’s supermarket right across the road was closed and demolished towards the end of 2004. Construction began on a new shopping centre, which would house a brand new Woolworth’s supermarket and 25 specialty stores. So, for the latter part of 2004, right up until the new centre opened at the end of October 2005, we were trading opposite a construction site, which had a big impact of the environment surrounding our store. It created havoc, which in turn affected store traffic. I think things definitely would have been worse if we hadn’t looked so fresh and new. Now that the centre is operating, we’ll be able to properly assess the benefits,” Anthony said. The good news for Taffa’s is that whilst they suffered through atrocious trading conditions, the new work has ultimately improved the suburb, with new street lights, new footpaths, underground power cables and other improvements to the amenities of the area, all of which should work positively towards restoring their trading patterns.

The closest competition is a hardware operation in Eastwood, about ten minutes away. It is a very traditional, trade-orientated hardware environment, and in a way, the two stores complement each other. There is a Bunnings at Auburn and one at Thornleigh, both of which are about 20 to 30 minutes from West Ryde. Anthony considers his store’s attention to customer service as his greatest defence against the threat rival stores pose to his business. He recently spent a couple of days researching something for a customer that yielded a very positive result – those are the lengths to which he will go to satisfy a customer. “I would have to put customer service at the top of the tree, as the most important focus for us,” Anthony said.

50th Birthday Bash
The store has always been very community minded, sponsoring local football and cricket teams, and donating merchandise to local schools and community groups to help them raise money for various charities and local organisations. On November 5, 2005, Taffa’s celebrated their 50th birthday with a sale and celebration day. It was a huge success with customers and local community/ business people turning out in their hundreds. A carnival atmosphere was created and the highlight of the day was a cake cutting ceremony, attended by special guests of honour, Ryde City Mayor, Councillor Ivan Petch, and Australia’s most recognised and successful Paralympian, Louise Sauvage. The day was also used to raise money for Louise Sauvage’s ‘Aspire to be a Champion’ Foundation. The day proved a commercial success and, just as importantly, was a celebration for the customers and a chance to say thank-you to them. Brian Lyons, Mitre10 NSW State Manager, who has been with the group for more than twenty years, said it was one of the best events he’d been to during his time with the company – a sentiment echoed by Mitre10 CEO, Bernie Bicknell, who also attended the day. 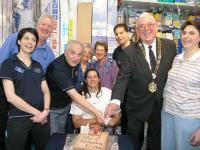 Now that the party is over and the dust has settled, what does the future hold for Taffa’s Mitre 10 Handy? “We’ll never take our eye off the ball when it comes to service or store presentation We will be concentrating our attention over the next couple of months on fine-tuning our ranges and making sure we’ve got the mix right,” Anthony said.

It would appear as though the business trend for Taffa’s Mite 10 Handy will see them enjoying healthy sales in 2006 and, who knows, maybe another award or two in the future..?