It isn’t pretty, it isn’t air conditioned or warmly heated in winter, and it isn’t in high traffic locations, but 84 Lumber keeps growing and growing. Bob Vereen reports…

Named for the little Pennsylvania hamlet (Eighty Four) in which it was founded, 84 Lumber today is 50 years old and clearly successful, having charted a course far different from that of its two big-box competitors, Home Depot and Lowes.

Its success today is a credit to its founder, Joe Hardy III, and his daughter, Maggie Hardy Magerko, who is now president. Unlike so many other lumber-building material merchants serving both consumers and contractors which did not survive the changes wrought by Home Depot, they realized their “old way” of serving customers would have to change. They decided to focus almost entirely on serving the professional trade – local tradesmen and contractors. One of their most successful units actually pointed the way for them, having scrambled for business by making outside sales calls. When the two Hardys realized this was successful, they didn’t hesitate to adapt it chainwide. Today, the company employs nearly 2,000 outside sales people who work out of its 500 sales units scattered across most of the United States. Only recently has it expanded into the western states with two units in California, a beginning in Arizona and a few units in Idaho and Colorado. More than a dozen new stores will be built in that region in 2006.

The growth of 84 Lumber is a true American success story growing from a single ‘cash and carry’ lumber yard which Joe Hardy founded in 1956. Now the privately owned business turns over $4 billion in sales, and besides its 500 stores, also operates 19 component manufacturing facilities. An engineering graduate, Joe Hardy became the top salesman for his family’s jewellery company, Hardy and Hayes. At 31, with a burning desire to start his own business, bought a tract of land near Eighty Four, not far from Pittsburgh. It grew slowly. In the mid-50s, it was doing only about $3 million. However, the attention given to Do It Yourself and construction, in part fuelled by Home Depot and Lowes’ growth plans, helped the company begin to be more aggressive in its own growth plans, though it never departed from its site selection and operational format.

Caption: A house under construction showing 84 product in use

It locates its large-footprint units in rural or non-metro areas, preferably with rail siding nearby to minimize shipping costs for its heavy concentration on building products rather than shelf goods. Locations are up to 10 acres in size. 84 Lumber might be described as the industry’s most prominent low-overhead retailer. Its buildings are easily assembled from metal trusses and weatherproof exterior panels. Inside sales areas are not air conditioned and barely heated in winter. Floors are cement and fixtures minimal in number and basic in style. As much of its business is concentrated on lumber and building materials, its retail sales floor is the smallest part of its operation. Large, open sheds house its extensive building materials inventory. Its retail sales floor contains only a smattering of basic needs for tradesmen and stray Do It Yourselfers who might wander in.

Yet, on average, these locations generate US$8 million in sales with a minimum of staffing. Units operate with a store manager, an assistant and one or two yard and/or office workers, as needed by volume. If sales warrant, there might also be an outside sales manager. With negligible walk-in trade, it means that each of its outside sales people is responsible for nearly US$2 million in annual sales.

The company is organized into 8 regional divisions, and opened 40 locations last year with plans for about the same number this year. Its component plants produce the trusses and pre-assembled walls that make home construction less costly and time-consuming for builders. It built 5 more component plants last year. Today, it primarily serves small to mid-size builders, though a few larger building firms are beginning to use the company as a resource. It buys from about 300 suppliers, but the top 60 account for 80% of purchases. Shelf goods (hardware, limited plumbing, tools, etc) are bought from a national hardware wholesaler. 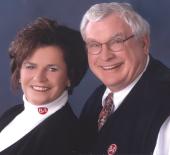 Caption: Joe, with daughter Maggie – now President – who used to go on road trips with him as a child, scouting for new lumber yard sites

With its clear focus on low costs and limited product ranges, 84 Lumber also concentrates on helping its employees grow and prosper. A promote-from-within policy is in force. In addition to competitive salaries within each region, the company also provides sales and profit incentives. Employees also have the opportunity to visit Nemacolin Woodlands, a hunting and fishing lodge that Joe Hardy bought in 1987 and transformed into a world-class resort. Nemacolin, located in Farmington, Pennsylvania, features three hotels, 14 restaurants, a shooting academy, equestrian centre, off-road driving academy and two golf courses. 84 Lumber uses Nemacolin to celebrate important anniversaries for employees. Anyone marking their tenth, twentieth, thirtieth, fortieth or even fiftieth anniversary with the company, is invited to attend an event that includes spa services, group activities and a dinner that recognizes their milestones. 84 Lumber also runs a unique loyalty program – the Inner Circle Rewards Programs – which rewards loyal customers with high-end gifts and vacations to such exotic locations as Acapulco, the Caribbean and the Bahamas. In 2006, Inner Circle members will be able to choose from such trips as a bear hunt in Canada and salmon fishing in Alaska.

As it starts on its next 50 years, the company has ambitious plans. It aims to be a $10 billion firm with 750 stores within the next 5 years. That means not only increasing store count by 50% but increasing sales by an even greater percentage. 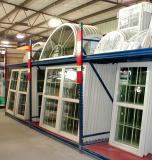 Caption: Components such as doors, windows and basic materials generate an average of $8 million annual sales per unit

“Our continued expansion, especially in the Southeast and West, and the addition of hundreds of outside sales representatives were significant factors in our continued growth and posting another year of record sales,” said President Maggie Hardy Magerko of the company’s 14th consecutive year of record sales in 2005. “By adding stores and associates, we continued to penetrate new markets and gain greater market share in existing markets, even as housing nationally begin a slow decline.”

Hardy Magerko said plans for 2006, the company’s 50th anniversary year, and the following two years call for increasing the store-opening pace with a minimum of 50 new stores per year. This growth will focus heavily in the western United States, with a special emphasis on the Gulf Coast following the devastation of Hurricane Katrina last summer. “In the Gulf Region specifically, we will open at least five new stores by mid-year to complement the four stores we have there now, and we are in the process of opening a Gulf Coast Recovery office in Baton Rouge,” said Hardy Magerko.