Award-winning company, Demain International, has its sights set on another prestigious award with the release of its sophisticated, new cordless drill… 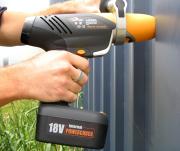 With one design award already under their belt, Demain International is feeling quietly confident of another success with their latest baby, the Demain Cordless Drill, which has just been announced as a finalist in the 2006 Australian Design Awards.

The company won the prestigious Australian Design Award 2003 with their Demain Angle Grinder, which also won a silver IDEA (Industrial Design Excellence Award) in 2004 presented by the Industrial Design Society of America.

The recently released Demain Cordless Drill has several unique features that Managing Director, David Scrimshaw, believes will win the hearts of not only the judges in this year’s competition, but also all those builders, carpenters and handymen who know the value of a quality drill.

“Research has shown that conventional keyed and keyless chucks are not ideal for clamping the jaws tightly. The user must continually re-tighten the jaws during use. The Demain Internal Power Chuck overcomes this problem by using the much higher torque and power provided by the gearbox and motor and combines clever electronics to drive the jaws closed, ensuring the bit is not over tightened.”

The result is up to 100% tighter clamping force on the bit or accessory when compared with a standard keyless chuck.

Housed internally, the spinning chuck cannot damage any surrounding materials, thus avoiding repair work and damage to the chuck itself.

The drill can be held close to the front of the tool, providing far greater control and weight distribution, particularly when fixing small screws. David said the carbide inserts in the chuck jaws are state- of-the-art in chuck design and help achieve higher clamping force. 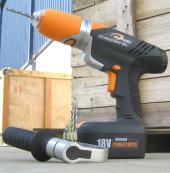 The electronic mode shift is another unique feature of the Demain Cordless Drill. Acknowledging that ease of use is of absolute importance, Demain’s revolutionary electronics provides three simple buttons. The user simply presses the Chuck Adjuster button to adjust the chuck and selects the open or close function by switching the forward or reverse direction of the drill. At the tightest clamping force the Electronic Power Shift will automatically move the drill into low gear so work can be commenced immediately. Selecting the low gear or high gear buttons instantly shifts to the required gear speed. When the battery is inserted into the drill, the Electronic Shift Control will automatically move the gearbox to low gear to provide the user with the maximum torque available from the drill.

With tool theft always a major problem for those in the trade, the Demain Cordless Drill also features a valuable anti-theft device. This in-built security function, when activated, will automatically disable the tool after 30 minutes of idle time. The user can program a personal identification code into the tool one time only. To re-activate the tool after it has been disabled, the user code is input by pressing a combination of the chuck adjust, low gear or high gear buttons.

For added safety, when in Chuck Adjust mode, if the user leaves the tool idle for 30 seconds, it will automatically shift to low gear to avoid accidental adjustment of the jaws. For more information on the Demain Cordless Drill visit www.demain.com.au.