Steve Liston is not a man to let things get lost in translation. As one of the first foreigners to enter the Japanese DIY industry, Steve is a pioneer with a wealth of industry knowledge. So he is quite aware of the difficulties – and benefits – of doing business here, especially when it comes to language.

Originally from Victoria, Steve has had a long history with Japan beginning in 1985 with a Rotary Youth Exchange program. He is now the sole distributor for Triton and has successfully developed a strong network of contacts, clients and friends across the country. Steve explained his first experiences with Triton. 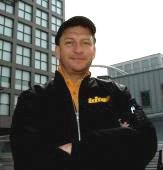 “We met the distributor for Triton [in Japan], who worked from home, was in some home centres but not a lot, and he didn’t demonstrate and his only catalogue was a single sided A3 sheet,” Steve said.

“Now, 80% of Japanese hardware is sold in home centres; based on Triton’s statistics 90 to 95% of customers buy after seeing a demonstration.”

With these facts in hand Steve subsequently worked out the distributor was making a good income regardless of his methods and decided that there was room for him to come in to the market. The rest is history and Steve’s business in Japan is continuing to blossom.

But the rewards did not come easy. After studying the language and using it in his business transactions for many years, Steve knows the difficulty and true value of Japanese language skills.

After going through four or five translators to assist him in preparing Japanese-language instruction and educational materials (an area of the business he considers vital) Steve has now refined his translation process.

“It’s one thing to be able to translate it’s another to know woodwork,” he said.

“There are so many things you can’t translate direct, like galvanized nails – they don’t have them here.”

This kind of industry specific lexicon is important, as some translators just simply don’t know it and if the language isn’t accurate the consumer eventually loses out.

So, Steve now approves everything that goes through the translation process. Its one of the reasons he must be here.

“I don’t read much Kanji (Chinese characters used in Japanese writing), that has not been a problem,” Steve said. “I ring people up to discuss things.”

He has other advice for those keen on using the language in business.

“Even Monkey’s Fall from Trees is little book of 100 Japanese proverbs that I recommend for anyone learning Japanese. Through that book I was able to learn a lot proverbs. If you can come out with an appropriately timed proverb you sound smart.”

This kind of language is important to get “in” with Japanese contacts; who are infamous for doing business based on the value of the relationship.

Steve is also a firm believer in the value of educating the customer.

At the busy Shinjuku Tokyu Hands store in Tokyo, a foldable Triton table is set up with a video playing that explains how the products work. There are also catalogues that are free to take.

“The catalogue until we came on board was A3 single sided. Now we are up to a 24 page colour pamphlet that says what you can and can’t do,” Steve explains.

“The catalogue has made a fair difference.

“The improvement in the quality of customers has been 100-fold, because it means now that we have put in a lot of what it can’t do we don’t have people buying it with false expectations and complaining to the stores who in turn throw up their hands and say its too hard.”

It seems the “she’ll be right” attitude just doesn’t cut it in Japan.

While he has a goal of building a “pipeline” to the Japanese market for products he distributes Steve insists quality is more important then speed. He also has other advice for those considering entering the market.

“Face to face is vitally important for a foreigner,” he said. “There are so many barriers you have because you are a Westerner. “There are a lot of places I go where I am still the very first foreigner they have met.”

Steve believes many people who come to Japan are under-prepared.

“If you get a knock back from a buyer, chances of getting a second meeting are slim,” he explained. “Coming cold to Japan is so hard.”

Although Steve is keen to deter those who think Japan would be easy, he wants to encourage those who are prepared to go all the way.

“You have to be committed to breaking into the Japanese market and expect it to take a while.”