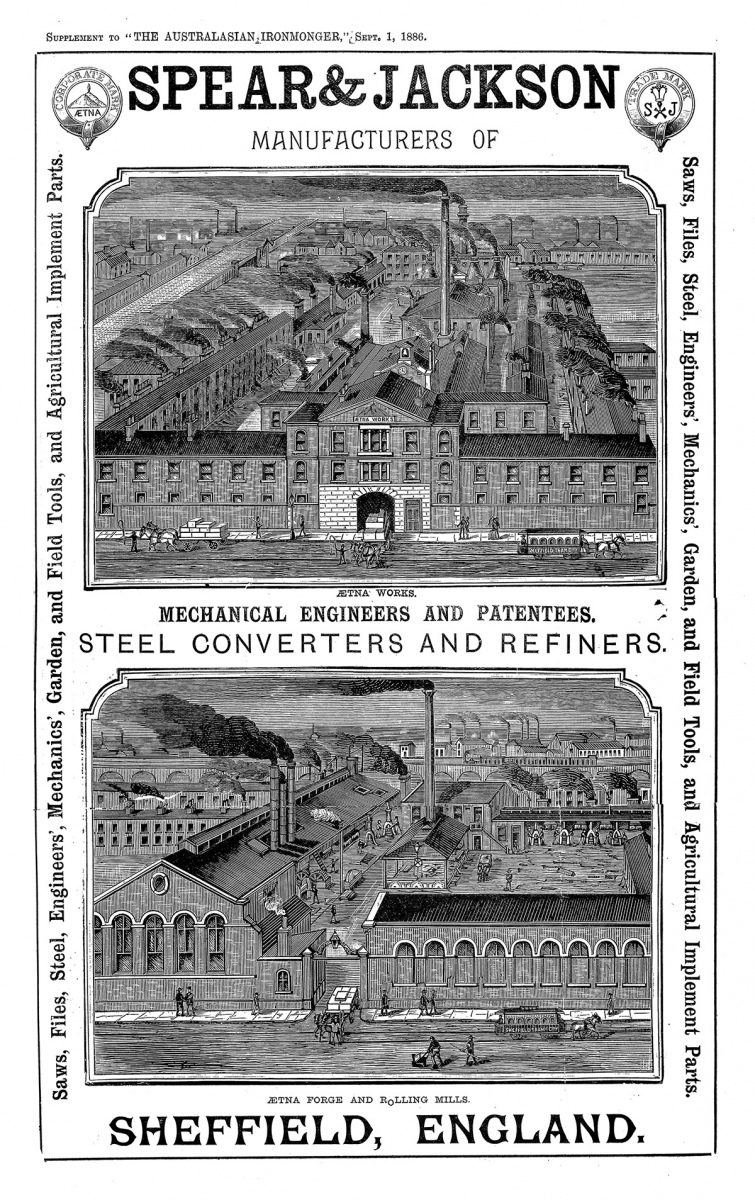 It was in 1886, when Mr W.G. Piper and Mr F.W. Bridges arrived in Melbourne to establish a ‘colonial edition’ of the world’s oldest trade publication, ‘The Ironmonger’. Incredibly, ‘The Ironmonger London’ was launched 27 years prior to the Australasian version, in 1859.

At the time of its launch, Mr Piper and Mr Bridges could never have imagined that their humble publication would go on to see out two world wars, an economic depression, several severe recessions, the Global Financial Crisis and most recently the COVID pandemic.

It was in one of the earliest versions of AHJ that the founders specified the “importance of the Australasian markets to European and American manufacturer’s offering sufficient grounds to warrant the existence of a hardware trade journal, particularly considering the future possibilities of these industries within the colonies themselves.”

Within just 12 months ‘The Australasian Ironmonger, Builder, Engineer and Metal Worker’ had been warmly received by readers and advertisers throughout Australia, New Zealand and Britain.

Enclosed is a compilation of some of the most momentous events in hardware history, including surprising product launches, the establishment of many successful buying groups and the enormous growth of the do-it-yourself market.

The late 1800’s was a time of prosperity for Australia. Fresh mining developments in many of the colonies witnessing a marked increase in business on a national scale, so much so that in the 1880s Melbourne was commonly regarded as the richest city in the world. It was during this time that nearly 7000 patent applications were lodged throughout the seven colonies, with new businesses returning handsome yields to local governments.

Incredible historical ads of ‘J. McEwan & Co Wholesale Iron Merchants and General Furnishing Ironmongers’ in Melbourne, were reminiscent of the many blacksmiths who created pieces from lamps, cooking stoves and cutlery of every shape and size, during this time.

Just some of the unforgettable products launched included a nickel-plated cone shaped sprinkler, scissors combined with a knife blade as well as the Danks Spray Pump, (which reaches waist height from the ground up) for the diffusion of poisons for bugs, as well as being invaluable for washing carriages.

Stainless cutlery was a commodity not heard of by most during this time apparently, and was described as a luxurious necessity that hardware retailers were urged to push in-store from a hygienic and labour saving stand point.

1886 also saw Arthur and Robert Bunning arrive in Western Australia and soon after purchase their first sawmill. Bunnings Bros was then incorporated in 1907.

It was in the 1920s that export trade grew in popularity, with Australian businessmen encouraged to look outside of their boundaries to develop manufacturing and export their products.

It was also during this time that the development of mechanical power saw the disappearance of the horse as a tractive agent, with horse power soon threatened by steam and oil tractors.

While one front cover of the Hardware Journal did depict horse equipment for those who were still using their four-legged friends as a source of man power, the 1920s also heavily features hardware and machinery throughout the publication.

Just some of the revolutionary new products published during this time included a wooden roller wash board, described as revolutionary because users can easily roll their linen over the wooden rods. A combined bean stringer and slicer was also on the cutting-edge, easily stringing beans by pulling the beans through a funnel where it is stringed on both sides.

The 1940s saw the growth of portable pneumatic and electric tools that began to have an impact in the constructional scheme of things, both in the amateur and industrial sectors. According to the ‘American Exporter’ it was reported that “even a superficial comparison between the present equipment and that of ten years ago shows the great progress manufacturers have made in the development of tools”.

It was in the 1950s that Bunnings began to expand throughout Western Australia, after it became a public company and leading supplier of hardwoods to Western Australia’s housing construction industry in 1952.

Traders also began to see the enormous growth of the do-it-yourself market throughout Australia, England and America during this time, with consumers choosing to bypass the professional tradesman because they could only just afford to purchase their own home, but not the cost of outside labour.

It was in 1959, that eight independents also came together to form the Mitre 10 group.

Some of the more stand out products during this time included Better Paint described as a “good paint – the best paint that modern methods and powerful machines can produce from the purest materials”. While it seemed SKF Ball Bearings were also a popular selling item, “for the economical and efficient running of any machinery.”

Large chain stores, discounters and satellite shopping centres were in substantial growth during the 1970’s leaving many hardware independents asking what this growth would mean for their businesses.

Australian Hardware Distributors Pty Ltd was another new company formed by a group of hardware wholesaler’s, one from each state, with the purchasing power of the member companies estimated to be in excess of $60 million a year.

The company was formed out of a strong belief that independent hardware retailers were in need of greater support from their suppliers than what was previously available.

One article published during the 1970s was quite reminiscent of current times, titled “The Independent Store” described as “a durable, profitable and powerful force in the hardware market place – aligned with wholesalers and the highly efficient organization of retailer’s associations”.

Homestead Hardware was also launched in 1971 (developed by Australian Hardware Distributors comprising of Danks), that comprised of hardware independent groups representing many states around Australia.

It was in the 1970s that one of the most striking articles was also published titled ‘That little woman might be your big asset’. This article explains how a wife can be a huge asset to her husband’s career if the wife is aware of their husband’s line of work as this can be important for dinner conversations. Stressing the importance of the wife’s interest in her husband’s work after it was found 50 per cent of women had no idea what their husbands did for work and no idea when they would return home!

The 80s saw the merge of the Home Saver stores with John Danks and Son. The merge was expected to bring substantial savings to members combined with the advantage of buying from a sophisticated online computerized warehouse.

In the same year Mitre 10 increased its market share in Western Australia by 60 per cent through the purchase of the MHW Hardware organisation.

Bunnings also grew through acquisition in 1989 with the purchase of Alco Handyman in Western Australia.

Incredibly AHJ also published that in the year 1900 Australian hardware stores had a turnover of $4.5 million combined, while in 1985 this number had grown to $1.4 billion with an expectation for this to grow to over $3 billion by the year 2000.

Danks unites its Homestead and Home saver members under one banner – Home Timber and Hardware in 1993 and goes onto become a national distributor by expanding into Western Australia in 1999.

It was also in the 90’s that Plants Plus launches in Queensland making it the only national gardening centre brand.

The 90s proved to be a big decade for Bunnings as well after it purchased McEwans in Victoria and South Australia in 1993, expanding operations to the East Coast. Soon after Bunnings opened its first warehouse in Melbourne and Wesfarmers gained 100 per cent ownership.

HBT (Hardware & Building Traders) was first established in 1997 as a buying group for independent hardware and building supply retailers. Initially known as Heavy Building Traders with 13 stores, the popular group has grown rapidly over the years after becoming particularly attractive to hardware independents seeking a low-cost buying group. Today the group has grown to over 800 stores nationally.

AIS (Australian Industrial Supplies) was also established in Melbourne in 1997, with an initial membership of nine companies who had a vision to ascertain a support base for a buying group.

Many suppliers entered into trading contracts soon after ensuring the group’s competitiveness and growth that now has over 120 stores nationally and into Papua New Guinea.

In 1996 AHJ published an article titled ‘news from the US article’ featuring our current US News correspondent Bob Vereen who continues to write passionately for AHJ as he enters his mid-90s! Bob certainly is a legendary figure of the international hardware market.

It was in the year 2000 that all of Mitre 10s regions combined into a newly created national structure: Mitre 10 Australia Pty Ltd.

CSS (Construction Supply Specialists) was also established in 2002 steadily developing as one of Australia’s leading buying/marketing/promotional groups in the construction, mining and industrial market segments.

It was also in 2008 that Danks launched Western Australias’s largest wholesaler and distribution centre and in 2009 celebrated its 150th anniversary as the business is acquired as part of the Woolworth’s and Lowes joint venture. In 2010 Danks’ new partnership with Woolworths delivers unprecedented buying benefits.

In 2010 Mark Laidlaw was also appointed as Mitre 10’s Chief Executive Officer as Metcash acquires 50.1 per cent of Mitre 10.

AHJ celebrated its 125-anniversary edition in 2011, with our special edition covering the Danks National Trade Show and Conference that was held on the Gold Coast March 2011.

It was also in 2011 that Masters opens as a potential competitor to Bunnings, with Woolworths and US hardware chain Lowes operating the Masters Home Improvement stores.

It was also in 2016 Woolworths announced it will shut Masters stores by the year’s end and Bunnings went on to purchase Homebase in the UK, which became another retail disaster for the history books.

Despite the UK set back, today Bunnings has 376 trading locations, and six Adelaide Tools stores employing over 54,000 team members.

The year 2020 saw the unprecedented impact of the COVID pandemic have an enormous affect on the global and national economy. Luckily, the hardware and building industries remained somewhat unscathed. Retail businesses boomed as extensive lockdowns saw consumers purchase DIY products in record numbers.

Using their new found time at home to complete all unfinished DIY, painting and gardening projects. The trade industry also experienced record sales as Federal Government initiatives, such as the HomeBuilder grants, saw consumers take full advantage of the incentives to renovate throughout 2020 and 2021.

As we look to the future the AHJ team will refer to a quote published within the very first edition of AHJ. “We shall not allow the enterprise to slumber or die” and we are so proud that 135 years on – this promise has been kept, thanks to the on-going support of our advertisers, subscribers and relentless hard work of the AHJ team.