The year 2000 saw humble beginnings for Donnybrook Hardware and Garden after it opened as a small, family run Thrifty Link Hardware, situated across the road from the store’s current location.

Two years later, in 2002, the business moved to a much larger site, at 47 Southwest Hwy, and not only gained a larger retail and trade floor, but also significantly increased its parking and storage area.

Just 12 months on and the newly located Donnybrook Hardware & Garden won back to back ‘Thrifty Link Store of the Year Awards’. Owners, Glen and Kim Miller, were never fearful of change and quickly realised the best way to run a successful business, was to ensure it grew and evolved every year.

“In 2004 we added a garden centre. Initially the Garden Centre began as a stand out the front door with seedlings and potted colour. This then progressed to where it is now, taking over an unused area of the shop. This area had previously been used to display farm machinery by the previous owners. The Garden Centre is has been very well received by customers and has been an area that has always been important to myself and a great source of satisfaction and pride,” Kim said. 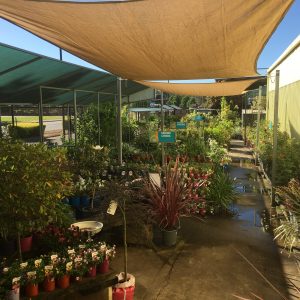 The Garden Centre was initially just a plant stand located at the front door.

“In 2011 we changed our banner to a Home Hardware store, after we extensively expanded our retail floor. We doubled our floor space, extending it by 480 metres square. We also installed new shelving which also gave new depth to our product range. The HTH group helped with a store layout and relay.”

“We chose to banner our business under Home Timber and Hardware because of the professionalism shown at the group and the support that was given to us as well. We loved the ‘Dogs’ and the Dogalogue Program and we also liked having the ability to source a wide range of product through the warehouse and chargeback facility,” she said.

It was after these changes were made to the store that Donnybrook Hardware and Garden received back to back Home Hardware Store of the Year Awards (for a store over 1000 square metres) in 2014 and in 2015.

“The awards were a real honour. We believed we received the awards due to our growth. The first one due to our growth from our initial expansion and in 2013/2014 we expanded again adding a Home Improvement Centre and another 400m2. We also introduced Hafele flat pack kitchens in 2014 which have been quite successful,” she said. 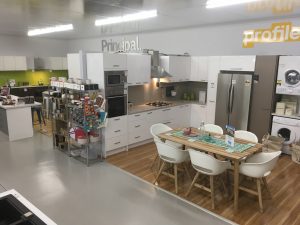 New flat pack kitchens have been introduced into the store’s Home Improvement centre.

Donnybrook Hardware & Garden is a stand alone business located on the town’s main street. After years of renovations and expansions, the store is now approximately 1600 metres square, while the garden centre is 300 metres square.

“We are located in a semi-rural area, about 30 minutes from Bunbury City. We are on a main highway with a lot of traffic, and also a bit of tourism as well. There is a large amount of lifestyle blocks in the town and most house blocks are large compared to the city, and include large gardens and vegetable plots. We also have a fairly large rural sector, with a mixture of farming and orchards.”

“We not only cater to the local town but to surrounding small towns that do not have hardware stores at all. Currently we provide hardware, a garden centre, flat pack kitchens, as well as animal health, stock feed and fencing,” she said.

Donnybrook Hardware & Garden is a family run business, with Glen and Kim running the store, alongside their daughter Liz, who is the Garden Centre Manager.

“Over the years our son Daniel has worked in the store as well as my parents, Alex and Cheryl Lockhart. We originally had a staff of one part-time junior and this has grown to 10 staff running the store, as well as ourselves. In 2016 we employed a store manager as well as a home improvement centre manager, allowing Glen and I to work more on the business than in the business. Before we took on the business, Glen was a local painter and we also had a farm with sheep, cattle and an orchard. I also have a background in accounting and computing,” Kim said.

Donnybrook Hardware & Garden continues to grow and thrive not only through constant change and development, but also through the introduction of new lines. The store’s customers currently sit at 75 per cent DIY and 25 per cent trade, as Kim believes it is important all staff demonstrate a wide range of knowledge compatible with the department they manage.

“We also make sure that we consistently provide excellent customer service, and customers constantly say our store is very friendly and inviting when they walk in. We have an enthusiastic and knowledgeable team who try very hard to help their customers. Whether customers are looking for green-life, building products, giftware, or flat pack kitchens, we make sure our staff knows the product they are selling, because we care about customers and we want to provide them with exactly what they need,” Kim said.

“Our store has increased in sales because we make sure our customers feel important. Most of our sale increases have occurred since we changed to Home, and we believe this is also due to us focusing on changing customer’s perception of our store. We constantly change the business and it is because of this that we have gone from strength to strength. One of these changes include introducing flat pack kitchens nearly two years ago and that has been a big difference to our sales as well.”

“Today some of our most popular departments include our garden, kitchen and building departments. Generally, we have a fairly diverse shopping basket from seedlings, paint, cutting disks, screws, reticulation to gift ware. Depending on what time of the year it is, is also relevant, particularly now with the weather is heating up, which is also when we sell large quantities of reticulation and garden products,” she said. 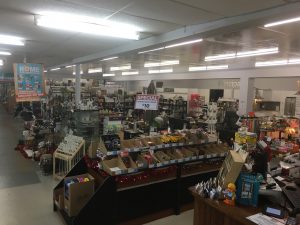 Donnybrook Hardware and Garden has gone from strength to strength through constant change.

Looking into the months ahead, Kim said the store will push its electronic footprint with the ongoing growth of its website and Facebook page.

“We will also continue our TV advertising for our kitchens, as well as storewide advertising in our local newspaper and other local media. In-store, we are also planning to develop our home improvement centre, to cater more fully for our customer’s needs, as well as change the trade area of the store to cater more easily to the tradies requirements,” she said.

When discussing the recent amalgamations of the HTHG and Mitre 10 groups, Kim said she believes the joining of the two groups will only have a positive influence on the growth of her business.

“The amalgamation is expected to only increase our buying power, to more fully service the DIY and trade customer requirements. The combined knowledge and expertise given by the HTH group and Mitre 10 can only further support us in our store’s growth and success,” Kim said.