Earlier this year Townsville Home Timber and Hardware, won the HTHG National Store of the Year (under 1000 square metres) award. However it took many decades of hard work and several site changes, in the lead up to winning the prestigious award.

Amazingly Townsville Home Timber and Hardware originated from a canvas and camping store,
in 1988, in response to customer demand for a wide range of items from the fishing and indus-trial businesses. 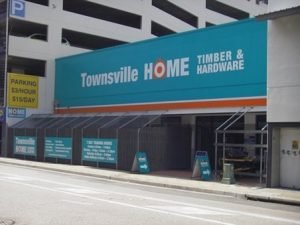 It was during this time that the store increased its range and began supplying to the building trade through the 1990’s. Th e store then joined Danks as one of the first Home stores in 1994 to 1996, to allow for a more retail focus. The store then relocated closer to the city centre in 2001 and then the inner city in 2005, with store owners Kevin and Susan Gill working hard to maintain their local tag and also expand into surrounding areas.
“In 2004, we closed our second store on the other side of Townsville, and consolidated everything into one location. We managed to keep in touch with our core client areas by discussing nearly everything we planned with the customers. Even with two major and two minor relocations, everyone wanted us to succeed. I believe it is the support from those original areas that has allowed us the get to our current position in our market,” Mr Gill said.

Trade offer ramped up
After all the relocating was complete, Townsville Home Timber and Hardware decided to bolt back on its trade off er in 2011, off ering this deal to all aspects of its customer base, including industrials, builders, and DIY’ers.
“A signifi cant bonus to the business was introducing a very experienced trade focused staff member, as the depth of knowledge in the whole business seems to have expanded in all directions. Our customers now understand that if they have a project and want some advice, we will have someone they can talk with, and we will supply virtually everything, including quotes and deliveries for the full job,” Mr Gill said.

Mini-box store lay out
More recently Townsville Home Timber and Hardware has been laid out as a mini-box, however it took many years before Kevin decided to go with this structured layout. 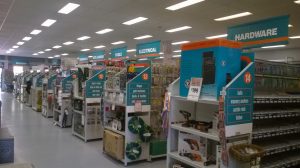 “I fought against the mini-box layout for 20 years because I thought that I knew best. But then HTHG suggested I do it and my wife said ‘do it’ and made me sit in the corner! I ranted and objected and thought of all the things that would be wrong, which turned out to be rubbish. People understand the big store format of isles and numbers. The staff and customers are definitely happier as the ‘flow’ is now more organised. Also productivity is constantly improving. Customers always comment how fresh and bright everything is. Our female visit number is still increasing and even reps comment, so it must be noticeable,” Mr Gill said. “We also have great staff , and every member has input into the business. I think firstly customer service and interaction have helped us grow. Secondly staff and customers who want us to succeed continues to drive us. Thirdly diversification in every field in the industry has supported
us financially and offered us opportunities in servicing niche markets.” “Although the store has always achieved good cash flow, we have increased our turnover by nearly double since joining the HTHG. At one point in time, Townsville had seven competition hardware store sites but HTH branding gave us the point of difference we needed. Th e promotional program restored my faith in catalogues, while regaining access to a good trade desk has helped us become one of the largest resellers of roll-form steel in Queensland,” he said.

“A bloody good team.”
According to Mr Gill, current growth within the store has primarily come from
existing clients, as well as through increasing the store’s range of services.
“For example one of our clients has just secured a three million dollar refurbishment contract, 800 kilometres from Townsville and adjacent to two big boxes and two well established hardware outlets, as well as several specialist outlets. Due to a lack of service, this specific client will not deal with these competition stores, so we freight his stuff direct from Brisbane or we opened accounts in the town where we have chargeback and the client picks up the goods from there. These opportunities come from our trade manager working with clients, discussing the problems with myself and the retail staff , and we found an answer in less time than the time it takes to make a coffee. They are a bloody good team,” Mr Gill said.
“Although our retail customer numbers are slowly increasing, our spend dollar is up significantly, by about 35 per cent per annum. When you have trade customers shopping
together with the retail users, we try to range items in categories and increase density on selected items. If anyone wants a big or small volume, we manage pricing on accounts at point of sale.”
“We also use an off -site bulk storage facility and we pick and pack orders, then deliver or arrange pick up. At the store we keep half packs of framing etc, for small tradie pickups. Although we have no drive through and only four carparks at the rear, we try and keep customer store visits to seven minutes so we can manage the tight areas we use. Our trade manager works hard on phones, texts and emails or site visits and the retail staff keep alert to any conversation that might allow a volume deal. Three years ago we had 80 percent retail and 20 per cent trade/industrial spend. Today the fi gure is 50/50 and will change again as we progress,” he said.

Local demographics
With the local area consisting predominantly of 40 plus year old unit dwellers, renters and developers, Mr Gill said the seven wealthiest districts in the Townsville area are within six kilometres of the store and consist of the highest disposable incomes, as well as the top five districts for singles. 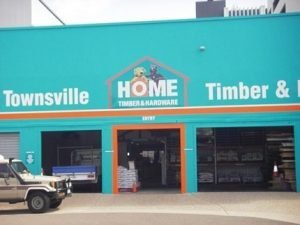 “The local demographic is 42 per cent renter and 58 per cent occupier. Industrial supplies materials and equipment, as well as construction materials are now our biggest material sales direct from manufacturer, direct to site. Top departments are general hardware (steel, fasteners etc), paint and accessories, plumbing and garden in all its forms although we only have a 60 square metres of green life area. The total building area is 800 square metres while the display area is 585 square metres,” he said.

Award winning years ahead…
Kevin and Susan will continue to work in the store and strive to meet the needs of their customers like they have done for somany years. In the near future, the couple plan to expand and are also trying to find a suitable site that will encompass the couple’s concept of an improved offer.