On the 5th of February 2018, Wesfarmers surprised the Australian Stock Exchange by announcing they would be taking a £454m (A$795m) impairment charge on their purchase of the UK based Home Improvement chain Homebase. Not only that, but they expected to confirm half year losses before interest and tax of a staggering £97m(A$165m). The business would also be taking stock write-downs of £37m (A$66m) and a further £40m (A$70m) to cover up to 40 planned store closures.

Commenting on the poor performance at the time, Group Managing Director of Wesfarmers Home Improvement Division Michael Schneider said, “It is clear that a significant amount of change has been driven through Homebase since the acquisition and the disruption caused by the rapid repositioning of the business has contributed to greater than expected losses across the Homebase network.”

This was the first time Wesfarmers admitted that the issues in the Homebase business were not market or competitor related, but entirely self-inflicted and simply would not have occurred without the decisions made by the local UK management team, led by Peter (PJ) Davis. How and why these glaring errors were made, so soon after the costly exit of the Masters business from Australia remains a mystery.

Coined as ‘The most disastrous retail acquisition in the UK ever’ (Guardian newspaper) on 12th June 2018 the business was sold for just £1 to the restructuring specialist Hilco Capital.

How did they get it so wrong?
The transfer of ownership of Homebase from Home Retail Group to Wesfarmers took place on 27 February 2016 and following the sale, long time Bunnings Director Peter Davis PJ was appointed Managing Director, Bunnings UK and Ireland Wesfarmers quickly announced plans to completely rebrand the Homebase business within the next three to five years, including all stores in the UK and Ireland. The stores would be rebranded under Wesfarmers existing Bunnings Warehouse banner and a planned further £500 million would be spent on upgrading them to the new format.

We believe a number of fundamental errors made in the first three months of ownership are now directly responsible for the dramatic deterioration in the performance of the Homebase business, which ultimately led to the sale.

Removal of concessions
Early on, Wesfarmers made clear its desire to remove all concessions and adopt the same business model as its Australian and New Zealand businesses. The first concession to be exited were Argos and Habitat (as a result of ownership of the brands moving to Sainsbury’s following their acquisition of Home Retail Group in 2016). Next to go was the successful Laura Ashley brand and by June 2017, their remaining 22 concessions had been exited from the company. Of the £24m of profit made by Homebase in the twelve months prior to Wesfarmers acquisition, £20m of that was generated by concession income – the business was now only breaking even.

Reduced prices
Within weeks of ownership, Wesfarmers reduced the retail prices on over 10,000 Homebase lines by an average of 20 per cent. Homebase had historically been more expensive than the competition and this was justified through a better shopping experience, more up-market ranging and a higher income, mainly female target market. This single step, to deliver the key element of Bunnings Strategy ‘Lowest prices are just the beginning’ wiped out any remaining small profit Homebase had been making and delivered little uplift in volume to counteract the margin decline.

Increased stock levels
The UK management team believed that by dramatically increasing stock levels in Homebase stores, they could trade the business to a more profitable position. This included filling what were once tidy and inspirational stores with large volumes of lower value lines, including a wide range of price entry products from unknown Australian brands. As these products had no in-store location they cluttered up the aisles and promotional ends, giving more of an impression of being a discount, clearance store than the inspirational, attractive shopping experience that Homebase once was. Comments from consumers on social media included ‘What’s happened to Homebase!! It looks more like a car boot sale!’. The addition of the new brands and cluttered aisles coincided with the removal of the existing Homebase point of sale and replacement with hand-written pricing signage, so predominant in the Australian Bunnings format. Also gone was the neat and tidy merchandising, the perfectly filled secondary displays and the inspirational, ideas driven focus.

What Wesfarmers didn’t realise at the time, was that it was the Homebase shopping experience that differentiated the retailer from its functional, warehouse style competitors including B&Q and Wickes. Each of these fundamental changes made by Wesfarmers removed good reasons to shop in a Homebase and worst still, completely alienated the once loyal, predominantly female high spending shoppers, who left in their droves, to retailers such as Dunelm, The Range and a reinvigorated B&Q.

Loss of focus on kitchens
The Kitchen Category was critically important to the Homebase business and drove sales of many other categories including decorative, lighting, flooring and housewares. By simply copying and pasting the Australian model into the pilot stores with an emphasis on lower value kitchens and a dramatic reduction in space allocation, their credibility for kitchens was seriously damaged. When combined with a decision to move away from the footfall driving high/low promotional discounts, without being replaced with interest free purchase offers and a decision to no longer offer their own kitchen installation service and kitchen sales were in free-fall.

The Bunnings pilot stores
The first Bunnings branded pilot store in the UK opened in St. Albans in early February 2017 and at the point of the sale to Hilco, 24 stores had been converted to Bunnings at an overall cost of more than £40m. Although we understood that the early results from the pilot program were encouraging, during an investor call in February 2018, the Wesfarmers team admitted only half the coverted Bunnings pilot stores were making a positive contribution to the overall profitability of the company.

Following the acquisition by Hilco in June 2018, we now know that all 24 Bunnings branches will be converted back to the Homebase brand during July 2018, with the St. Albans stores first on the list. The conversion will be purely cosmetic, with the changes being mainly focused on the exterior of the stores, with few changes inside.

With regard to the Australian brands who supported Wesfarmers, many of whom set up satellite operations in the UK to support the business, the future is uncertain. Rumours say that Wesfarmers built an element into the sale contract to Hilco stating that all Australian brands including Jimbuck, Kit & Kaboodle etc. have to be removed within six months.

What can we learn from this?
If there has ever been a case of corporate arrogance combined with a total disregard for the unique requirements of a local consumer, this is it. To simply assume that an unknown retail model, under an unknown brand will immediately translate to shoppers in a new country and market is at best foolish and taking into account the escalating job losses at Homebase stores and head office, you can go as far as to say this was negligent. Every local market, whether country or city or town has their own unique requirements, their unique set of competitors and consumer needs. As a retailer, firstly understanding and then meeting the needs of your current and future customers remains the first rule of retail. 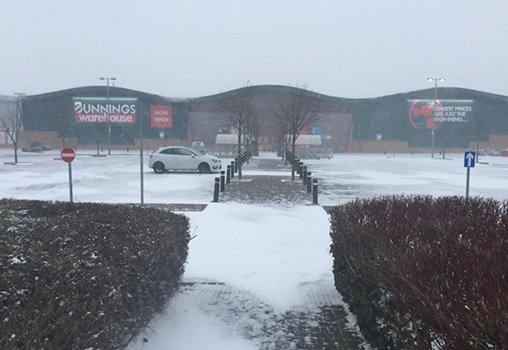 At this stage, there are very few winners from this whole sad situation, with the exception of the advisors, lawyers and accountants who take their fees whatever happens. Bunnings UK competitors B&Q and Wickes may continue to pick up some business as the Homebase business lists badly in an increasingly choppy UK market, but the real losers are the 11,500 Homebase team members. Only two years ago, they were sold a new and exciting vision for the future, a journey which they believed would take them to the number one position for Home Improvement not only in the UK, but maybe even Europe. What they didn’t realise at the time was that the promise was built on nothing more than ego and arrogance and how quickly this proved to be a costly mistake.

Full of confidence having seen off Masters in Australia and with a large pot of cash to spend, Wesfarmers team believed the Bunnings format was invincible. Its rapid decline and embarrassing exit from the UK, will stand as a painful retailer case-study for many years to come.