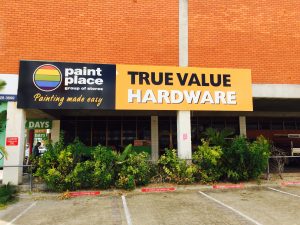 Just over 24 years ago, Peter Leather opened Leather’s True Value Hardware, in Townsville, Queensland. In the early days the tiny store boomed, with the then BBC Hardware stores closing at one o’clock on a Saturday. Peter offered hardware customers the rare opportunity to shop all weekend. However, this was all before three big boxes moved into the Townsville area.
In the store’s early days, there was a niche market in the suburbs of Townsville, for a smaller seven day hardware and paint store, Peter said.
“So that’s how it came to be. I was in the paint game originally and I used to service the hardware stores, and I opened the business after I saw a market for a hardware store out in the suburbs. We did quite well in the early days of trading seven days a week, primarily because our Sundays were fantastic. But after the three big boxes moved into town, my store became caught in the middle of two of the big boxes,” Peter said.
“We certainly struggled as soon as the first Bunnings opened, and then the second one opened, so we were caught between the two and this did affect us significantly. We really battled through for quite some time.”
“However, after years of fighting I think we are starting to come back from this and the business is better now than it was two or three years ago, when the second Bunnings opened. I think there is a substantial customer base for Bunnings but there are also people who are not supporters. So for those consumers who don’t like visiting the Bunnings stores, there needs to be someone to service them and I am happy to do this. I believe we can offer the most personalised service available as I am currently on a first name basis with about 70 per cent of ourcustomers,” he said.
Peter said offering a more personalised style of service has definitely assisted the store in surviving and he believes he is lucky to trade in a suburb that loves having its own little hardware store in the area. “Much of our customer base is DIY, with about 30 per cent of our customers being smaller trades people who use me for smaller hardware items, such as gap fillers and silicone. But we don’t stock bigger items because we are such a small store,” he said. 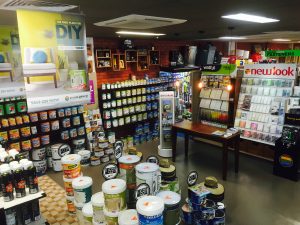 A store within a store
The store’s name was originally Leather’s True Value Hardware but it recently changed to Leather’s True Value and Paint Place, after Peter joined the Paint Place group just over four months ago.
“I decided to be a part of the Paint Place Group after a lady by the name of Angie Bell called into the shop. (Angie is a professional retail branding consultant for Paint Place). Angie said she was from Paint Place, and asked if I was interested in being a part of The Paint Place Group of Stores. I research
ed the group and also read one of Angie Bell’s books titled ‘Retail Rebranded’. I got a lot out of her book and it gave me the motivation to do something and make a change. I could see what she was offering would be a great opportunity,” Peter said.
“So far we are four months into being with the Paint Place Group of Stores and the response has been extremely positive. We have always sold paint and it has always been a part of our business and I am very happy to be a part of Mitre 10 and the True Value Group. However, I think having a brand in a brand, makes the business a bit more professional towards paint in-particular. I now have customers seeking the shop out and visiting us specifically for paint. Before local customers bought paint off me but now I have customers seeking out the store to buy paint and our dollar sale for paint has certainly increased.”
“I think the additional branding has also helped. The core business has not changed. I haven’t taken anything away from the hardware business. I think I have just professionalised the paint department which has been fantastic. For a little shop we are thrilled as we are only 240 square metres, which is almost unheard of now,” he said. Combatting local competition
Peter said that although he does not have all the answers on how to compete with the big boxes, he feels very lucky his business survived in such a tough retail climate.
“Townsville is going through a bit of a tough time economically and I am just grateful that the business is going as well as it is. I believe Paint Place has given us the boost we needed just at the right time. The store did need a bit of a re-vamp and after I spoke with Angie Bell, she
came up with a few decent ideas on how to upgrade the shop, and everyone has commented on the upgrade which has been fantastic.”
“It is only a small area but it has come up really well. And the changes were all simple little things that cost me next to nothing, including removing the carpet on the floor in the paint area. We removed this and painted the floor and the ceiling along with some drop lights and it looks
fantastic,” Peter said.

Local demographics
The small store is located amongst a group of offices, however it is situated on a main road with a strong residential area to the rear of the
store.
“I also believe the local suburb is going through a transition phase of younger people moving into the area and renovating the older houses. As a country city, Townsville has a strong population of around 180,000 people, with a large army base also supporting the town. 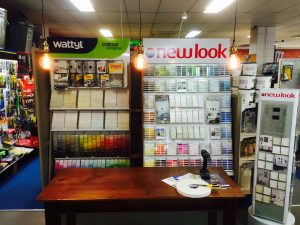 Looking into the future…
Peter said the store’s future is now much brighter than it was. Although there is no room for the store to expand, Peter said he will continue to focus on servicing the local area, offer personalised service and grow from the support of both Mitre 10 and The Paint Place Group of Stores.