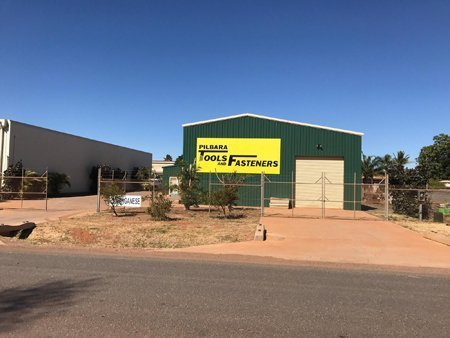 After opening its doors just six months ago, Pilbara Tools and Fasteners in Port Headland WA, has already outgrown its premises and outgrown the sales of its sister store, based in Broome. While the Port Headland store certainly held a lot of promise before it opened, it has delivered in sales and growth way beyond all expectations, according to owner Nick Howat.

“Our primary customers are a lot of trucking companies and builders, as well as those who operate the machinery that load all of the iron ore onto the ships. Shut downs are held at the local mines once a month, which is when they shut down a section of the mine to conduct repairs. There are several service companies who conduct shutdown works for the mines, and we work closely with them. It is a different world here as we are one of the world’s biggest mining towns,” Nick said.

Port Headland is located on the west coast of WA and is the second largest town in the Pilbara region, with an urban population of almost 14,000. Today Port Headland operates one of the world’s largest tonnage ports, handling over 100 million tonnes of product worth over $3 billion a year. 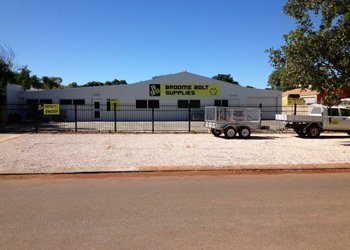 Store history
With a strong background in retail, Nick’s family had a shareholding in West Coast Fasteners, before he left this business to do his own thing.

“I moved from Perth to Broome, with about five pallets of stock. I initially started a business with a contract driver conducting deliveries around town in my truck, while also starting up the hardware retail store. The two businesses complemented each other because the truck was giving me money straight off the bat. I also received free rent in the office of a brick factory I was doing work for so I started the retail business there, on the sniff of an oil rag. After a while the retail business took off and just got bigger and bigger,” he said.

After establishing Broome Bolt Supplies, Nick said he had always wanted to start a second store in Port Headland, but due to the booming mining industry in the Pilbara, it was too expensive to rent a property, with average rent peaking at around $2000 a week.

“There is a huge demand for iron ore and also from the gas plant down the road, so there was a high demand for employment but a shortage of accommodation, so all of the rent prices went through the roof. Recently the prices became more stable, which was when we decided to open the Port Headland store. Our Broome store had also begun to slow down because the local pearling industry is not as strong and it is more of a government run town. Our business began to change and I had built up so much stock that I had to do something with it. So it made sense to just go and set up a new branch,” he said. 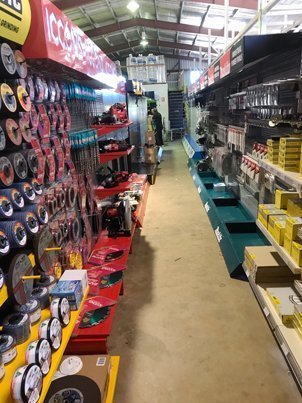 “I am selling stock a bit cheaper than what we sold it in Broome. Broome is 600 kilometres further north than Port Headland, so the freight costs more to Broome than Port Headland. A lot of people use freight as an excuse, which is actually not the case,” he said.

Learning along the way
When starting up Pilbara Tools and Fasteners, Nick did base his stock partly on what he thought local businesses required and partly through learning from customers’ requests.

“I was wrong about the volume of stock that would be needed and the scale of the size of the product that would be required as well. For example, everyone sells socket sets and we supplied three quarter drives for big machinery. This was all supplied on the shelf in the first week, until our customers came in and asked where our bigger stuff was. They required one inch and inch and a half drive stuff. It is nothing you would sell in suburban shops, but it is needed here. So it was a bit of a learning curve to begin with,” he said.

Busy times ahead
Currently the store stands at 400 square metres, but Nick said the store has run out of trading room already. With a staff of three, including Nick in sales, plus an accounts manager, which is Nick’s wife Sherrie, the team also may need to expand.

“Seeing the business grow so fast is exciting but it is still early days and you do have to be careful of your cash flow, because there is a fear there that you will grow too quickly. We have not advertised at all. We are too scared to because I want to get the business right for the customers that I do currently have, before I start expanding the business,” Nick said.

“Facebook is also very popular out here and we have done well on social media. The Facebook likes we received for the Broome store when it opened in the first 12 months was 270 likes, but on the opening day of Pilbara Tools and Fasteners, we had over 400 likes. On the first morning we opened, someone from a towing company saw the store, and was so excited he took a photo of the shop out the front and he put it on Facebook. We were flat out from that moment,” he said.

While trading up until the Christmas period, Nick said running the business was more about keeping up with the demand. 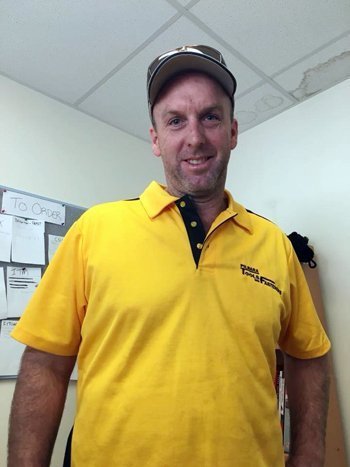 “This was also when my wife, Sherrie, relocated with our six-year old daughter and two-year old son, to come and help us with all of our accounts and a lot of the online work, as well as fine tuning any admin duties. It is thanks to her that we are looking more and more professional every week. There is still a long way to go but we are getting there.”

“When the family relocated from Broome to Port Headland, a lot of people asked why we were moving because Broome is such a beautiful place, while Port Headland has a lot of dust everywhere, and isn’t as pretty as Broome. Port Headland has a much higher growth potential. It is the infrastructure that is required to lift outputs that will see the town prosper again. There is already talk that the outer harbour will be dredged to allow the bigger ships in and increase the output in the iron ore mines. Other mines around town will also continue to expand and open up,” he said.

Online competition
Now that online shopping has become so popular, Nick believes it is even more vital that there is sufficient stock on the shelves.

“We focus on being stockists, while a lot of other people aren’t. In the old days, retailers would get away with the comment, ‘oh we will get it in for you’, because consumers just weren’t buying off the internet, but now with Amazon here, there isn’t anything that you can’t order online. People can get tools online at competitive prices, and they can have it in two day’s time, so we are facing bigger threats from there, which is why we try to provide our customers with stock now. Locals do try to support local businesses. As long as we offer a reasonable price and good service, they will support you,” Nick said.

Choosing CSS
After experiencing particularly disappointing service when attempting to join another independent group, Nick did not intend to join a buying group after opening his Broome store 11 years ago.

This was until CSS Managing Director, Jeff Wellard was having lunch with a Bosch Power tools representative, who mentioned to Jeff how well the Broome store was doing. So Jeff rang Nick attempting to have him join CSS but after his bad experience, Nick said he was not interested.

Jeff said he would ring back Nick in a month, which he did, and then flew Nick down to Perth to meet with Jeff and discuss joining the group and meet some other members. It was then that Nick was happy to be signed up straight away.

“The whole CSS concept is wonderful with Jeff particularly outstanding in the way that he treats the members, and always puts CSS the model first. When someone like that is backing you, you cannot go wrong, and he has created such a strong foundation. It has been a massive win for us,” Nick said.

Looking into the future
With the Port Headland store already proving to be so successful, it is hard not to think about expansion or moving to a bigger place, according to Nick, who said customers tell him every day that he needs “a bigger joint”.

“But this takes time and money and I do not like debt. Everything we have on the shelves has been paid for already, so yes we are definitely going to expand, it is just a matter of how we do it.”

“With every month that goes by, it seems things become clearer. We are definitely trying to be proactive, but it is hard not to be reactive as well because things are moving so quickly. I have run a few ideas past CSS but I am cautious in many ways because you cannot afford to have stars in your eyes. You have got to have your dreams but you also need to keep your feet on the ground as well,” he said.