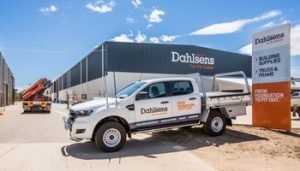 Boasting a three lane undercover drive through, all year round protected stocks and easy customer access, the purpose-built site has been a long time coming, according to General Manager, Jamie Dahlsen.
“For some 15 years, we have searched for the right premises and we have been on the original site for over 40 years. We were so pleased when we finally found an appropriate site to move our business to and we are very confident that investing into the new store will further bolster our service off er in Wagga,” Mr Dahlsen said.
The new store supplies a comprehensive range of timber, truss and frame manufactured on site, hardware, flooring, cladding, roofing, doors, insulation, plaster, windows and reinforcing, and is focused on supporting builders with their projects across the region.
Dahlsens Wagga Wagga Branch Manager, John Clark, and his team are already very well known for taking pride in providing genuine service, while tailoring the store’s offer of supplies and solutions to enable builders to get on with the job with minimal fuss. 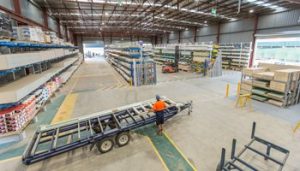 “Customers can expect the same service they have been used to, but now when they come visit us, they are under cover hail, rain or shine,” Mr Clark said.
The move to the new store, after 40 years on Ashmont Avenue, is not only good for business but is also great for the employees, with all stock now undercover in the 3500 square metre premises, he said.
“In the old shop we only had selected items undercover, but now everything is. Th is also means that staff are undercover all day, rather than working in the sun during the hot summers or wearing rain jackets to load trailers during wet weather,” Mr Clark said.
He also believes the extensive store update will attract more business.
“Whilst we deal with the majority of the builders in the region in some shape or form, there is always an opportunity to grow and hopefully this will be the case now that we have the new store,” Mr Clark said. 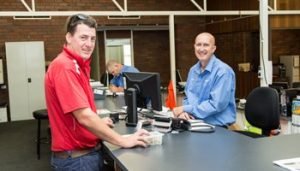 With the new facility, Dahlsens Wagga Wagga is now looking to continually grow and evolve within the local market.
“Now that we have opened the new purpose built store, we plan to continually expand and capture more of the market, both in Wagga and surrounding areas,” Mr Clark said.
The hardworking and dedicated team within the new facility, now consists of 29 employees, many of whom have been with the company for many years. The longest serving employee is Todd Murray, who boasts just over 24 years at the business, while team member, Glenn Kershaw follows Todd’s record with over 20 years service.
Mr Murray said he particularly enjoys working at Dahlsens because of the comradery the staff have. “We always have a laugh and a chat
which makes for a good day,” he said.
Mr Murray also believes the knowledge the store’s team brings to the town is certainly acknowledged by a large number of customers who have been dealing with the store throughout generations. 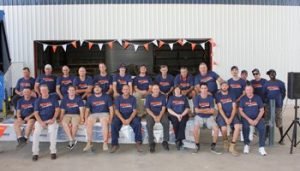 Dahlsens celebrates 140 years in the business
Incredibly, the Dahlsen family has owned and operated the business for 140 years, and has consistently fine-tuned and focused on customer service to win loyalty.
The business began when John Christian Dahlsen, a Danish immigrant, arrived in Victoria in 1862, and settled in Gippsland’s port town of Bairnsdale shortly after arrival. According to family folklore, a lucky gold find led to the beginnings of the timber yard and hardware business.
Always destined to be more than a country storekeeper, John C Dahlsen pioneered what became supply and invested in various industries including:
gold mining, fishing, timber mills, the Dahlsen shipping enterprise, a department store and contract home building.
In the 1970’s, Dahlsens sold a large part of other businesses to focus on its original core of timber and hardware, which is how the business remains today.
Fifth generation John Dahlsen, Owner and Chairman of J C Dahlsen Pty Ltd, is extremely proud of his family’s achievements, particularly to remain
independently owned and operated.
“140 years thus far has been a great journey for the Dahlsen family. In many markets, Wagga included, we have been dealing with the same builders over two and three generations. There is a great bond of mutual respect,” Mr Dahlsen said.

Stand out features of the business 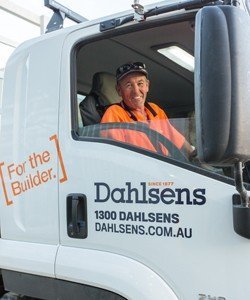 Today there are many stand out features of the business that ensure its success in such a competitive market including:
• Help builders be successful – Dahlsens is not distracted by DIYers. Its product range, internal processes and services are all designed to simplify and improve the process of building.
• Everything from foundation to fit out – Dahlsens carry only trusted brands, partnering with the best suppliers in the industry, and offers them at competitive rates. This ensures time is saved by dealing with the one supplier.
• 20 trade stores and seven truss and frame manufacturing sites across Victoria and southern New South Wales – All Dahlsens stores are owned and operated by Dahlsens, providing the same service throughout. An account with Dahlsens also enables access to the J C Dahlsen Pty Ltd.’s wholly-owned
trade and manufacturing subsidiaries in Sydney (Miscast Timber), Far North Queensland (Cairns Hardware) and the Northern Territory (Nortruss). There are now a total of 52 locations Australia wide.
• Own fleet of vehicles and drivers – Dahlsens is well equipped to supply in full and on time to prevent jobs being held up.
• The Dahlsens company culture is built on respect – As a family owned and operated business, Dahlsens is committed to remaining a successful independent long into the future. To do this, they understand that strong relationships with customers are vital. 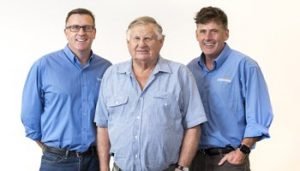 Looking into the future…
In Wagga, and indeed across southern New South Wales and Victoria, Dahlsens is set to continue its stronghold as one of Australia’s largest independently owned hardware chains with a commitment to continually provide choice to the market, according to the company.