Darwin Bolt Supplies completed the construction of its new 18,000 square metre store in June 2015, with the business now a flagship store. 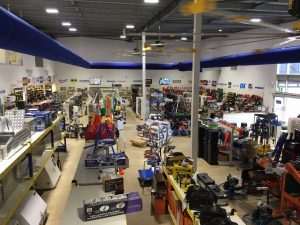 The new Darwin Bolt Supplies store has an extensive history behind it, with owners Brian and Nora establishing their initial bolt supplies business over 30 years ago.

Their original business, Alice Bolt Supplies, in Alice Springs was born after Brian began fixing up caravans for travellers who had towed their caravans to Alice Springs along the Stuart Highway. However, this was before the highway was sealed and once tourists reached Alice Springs, they often took their caravans to Brian for repair after they had been shaken badly from the unsealed roads.

According to Darwin Bolt Supplies branch manager, Phill Spencer, Brian began fixing up the vans, but he needed a substantial supply of fasteners to put them all back together.

“Shortl
y after this, Brian and Nora headed to Darwin and also opened Darwin Bolt Supplies. Initially Darwin Bolt Supplies was predominately a fastener company, so all we supplied was nuts, bolts, screws, fasteners, washers etc. Over the years the company developed into an industrial supplies tool store. Last year, at the end of June, we finished building the new Darwin Bolt Supplies store, which is a purpose built premises and is the largest in our group,” he said.

The company now consists of four stores in the group, including Darwin Bolt Supplies, Alice Bolt Supplies, Warrick Industrial Supplies in Queensland and NQ Fasteners and Lifting in
Cairns, Queensland.

After trading in Darwin for 26 years, Darwin Bolt supplies has built on a new 18,000 square metre site, allocating HBT as the buying group for the new store.

Mr Spencer explained that HBT was chosen because it had a lot more suppliers than some of the smaller buying groups.

“HBT is also the fastest growing independent buyers group that we could see on the market. The group also ensures funds are not taken away from the member and put into catalogues, which are often costly and expensive. This guarantees more returns for the member,” Mr Spencer said.

The new Darwin Bolt Supplies store has been designed specifically as more of an industrial tool store, as opposed to a store for the weekend warrior or DIY’er looking for budget type tools.

“We have got the serious tools for the serious trades, with our customer base being primarily tradesmen and the occasional serious DIY’er or retail trade. However, we are not a typical hardware store so 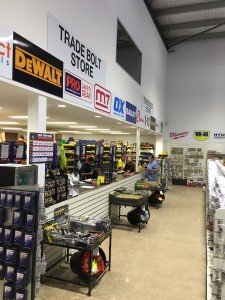 we do not supply timbers etc. We supply primarily tools, fasteners and consumable items that may be used within the construction, building, engineering and marine trades,” he said.

Darwin Bolt Supplies has stiff competition in the area, with five specialist tool stores nearby, and has plans to continually grow the business through the implementation of marketing with a difference.

“In most stores you will find there is someone at the counter waiting for the customers to come in. However, at
our store, we have a team of five guys who are out on the road, and they visit our customers, as opposed to the customers coming to us. By utilising their marketing skills and being able to see our customers, we are answering their needs and providing solutions to their projects. This is where a lot of our business comes from,” Mr Spencer said.

“We target a whole range of industries with this tactic which ranges from construction, development, marine, engineering, metal trades and joinery etc. We specialise across all industries,” he said.

“We all know that sales include offering a product at a reduced price. We decided to offer the market place a price that could not be refused and that is a cost price. So we held a six-hour sale of cost price shopping. We had 2500 items marked down at cost price and all the rest of our items have been marked down as well. This type of sale not only builds awareness of who we are, but also ensures our competition knows that the small independents like us can aptly compete wi 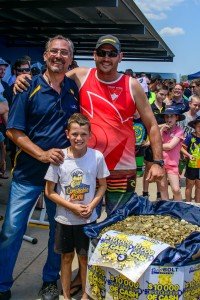 “The sale is not about money or profit, but more about building awareness, because if you buy something at cost price you are going to go home and you are going to remember that. You remember where you get your big bargains. The slogan we are using is ‘Cost price clearance sale, you can’t get better than that,’” he said.

Darwin Bold Supplies also ran a promotion giving away $10,000 in gold coins, to one lucky customer. The promotion ran for several months and the store was full of customers the day the winner was announced.

Darwin Bolt Supplies also has a tailor made loyalty club program, where customers are given the option to join the loyalty program for $10. This also allows the customer to receive a $25 gift voucher.

“Customers can then use the card to receive a further reduction off any priced item in-store. It is a tailor made program so if there is a motorist enthusiast club, we personalise the card specific to this group, as well as generic individual cards. This way we can monitor our customers and see where they are from,” Mr Spencer said.