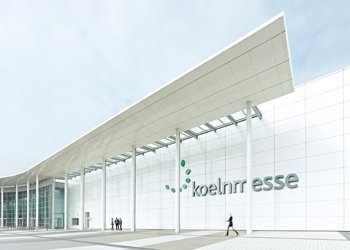 Successful all the way down the line

Boasting 2,770 exhibitors from 58 countries and over 47,000 trade visitors (plus nine per cent) from 143 countries, the event recorded a significant increase in the number of visitors. Decision makers from all over the world made use of the number one event for the hardware industry, to discover the new products, innovations and trends of the industry. Furthermore, the trade fair once again increased its level of internationality.

“As a result of this and the significant growth in the number of visitors, we were able to underpin the position of EISENWARENMESSE – International Hardware Fair Cologne as the number one event of the hardware industry,” she said.

The product show was also flanked by an event programme that focused on the digitalisation of the industry.

John W. Herbert, General Secretary European DIY Retail Association (EDRA) and Global Home Improvement Network (GHIN), explained the growth from abroad as follows: “EISENWARENMESSE – International Hardware Fair Cologne 2018 was a total success for us. The renewed adaption of the duration of the fair was particularly welcomed by our international guests. The number of international buyers, whom we were able to welcome here in Cologne, was correspondingly high.”

“Our major member companies each attended with up to 15 top buyers. It increases from year to year. That is a very good development and it impressively underlines the international significance of EISENWARENMESSE – International Hardware Fair Cologne. The DIY Boulevard as well as the exemplary customer service round off the first-class overall impression of this year’s EISENWARENMESSE – International Hardware Fair Cologne perfectly,” he said.

The increases were also clearly noticeable for the exhibitors too. 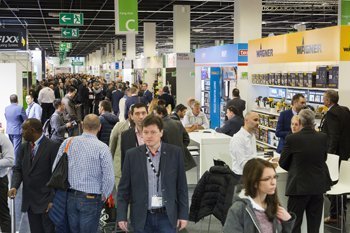 “These are very positive developments. They underline the fact that EISENWARENMESSE – International Hardware Fair Cologne, with its concept-related changes, is once again satisfying the demands of customers. Moreover, the high number of visitors from abroad accentuates the international significance of the trade fair,” he said.

Rainer Langelüddecke, Managing Director of the Trade Association of the Tool Industry e.V. (FWI), also shared this positive conclusion: “From the point of view of our members the trade fair went superbly. The four days of the fair hardly sufficed for some of the exhibitors in Hall 10, the tool hall, to hold all of the necessary discussions. EISENWARENMESSE – International Hardware Fair Cologne is an absolute must for our industry due to the high level of internationality alone, because together our companies have an export rate of 70 per cent and we supply 212 countries in the world. And many partners from these countries are on-site in Cologne to hold discussions and intensify their business relations.”

Formats satisfy customer demands
In addition to the new products, innovations and trends from the segments Tools, Industrial Supply, Fasteners and Fixings, Fittings, in cooperation with the Association of House and Garden Manufacturers e.V. (HHG), the DIY Boulevard impressed visitors once again in the Home Improvement section.

The format of the innovations per running meter sustainably convinced the top players of the construction, home and garden industry, with over 235 metres creating a pull effect. Dr. Peter Wüst, Chief Executive Director of the Federal Association of the German DIY, Building and Garden e.V. (BHB) said, “Overall, the industry has positively taken note of the fact that more exhibitors came to Cologne again this year. Some were also represented at larger stands in the Boulevard section so they could present the many innovations. In general, the Sunday was also very positively evaluated because on this day the buyers had ample time for intensive discussions that go far beyond merely the product.”

The industry faces digitalisation
One of the stimulating trend themes of EISENWARENMESSE – International Hardware Fair Cologne, was the theme of digitalisation, which was also part of the extensive event programme. Highlights included the two-day dSummit with lectures and exhibitors in the scope of the EISENforum, the Start-up Village as well as the ‘3D printing – Additive Production’ special event. In addition to the DIY Boulevard, the Association of House & Garden Manufacturers e.V. also supported the Start-up Village, which was curated by Richard van Hooijdonk.

“Fifty exhibitors from our association took part in the Boulevard. The mood is very positive, because many national and international customers were on-site. The association intensively supported the Start-up Village too – from our point of view a very futuristic concept, which unfortunately is still viewed with certain skepticism by many of the industries. Here, we will have to do adjust the screws slightly in time, because this is the future,” accentuated Rolf Rahmede, Executive Director of the HHG.

In the opinion of Thomas Dammann, Executive Director of the Central Association of the Hardware Trade e.V. (ZHH), the trade fair was also a total success and an important trendsetter in the age of digitalisation. 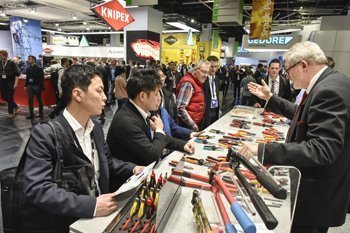 “EISENWARENMESSE – International Hardware Fair Cologne once again offered the trade a good opportunity to meet up with many important national and international tool partners. Alongside exciting and attractive product innovations, one could also pick up on diverse sales and marketing aspects for one’s own business. These included, for example, the theme of digitalisation or the depicted opportunity of 3D printing,” Mr Dammann said.

In addition to the trend theme, EISENWARENMESSE – International Hardware Fair Cologne offered further opportunities to exchange information and network in the form of the BME Buyers Days, the Hardware Seminar and the Trainee Day.

The EISEN Award 2018
For the fourth time already, together with their partners, Koelnmesse conferred the EISEN Award on the first evening of the fair at the Welcome Party. The EISEN CSR Award powered by BHB went to KNIPEXWerk C. Gustav Putsch KG. The Innovation Award 2018, powered by ZHH, was conferred to HAZET-Werk Hermann Zerver Gmbh & Co. KG (HiPer fine-toothed reversible ratchet 916 HP – 1000 Nm, 90 teeth), KNIPEX-WERK C. Gustav Putsch KG (KNIPEX rope cutter 95 62 160) and Wiha Werkzeuge GmbH (Wiha SpeedE). The winners were selected by the respective expert jury from a total of 12 nominees.

*All figures are calculated in accordance with the guidelines of the Association for the Voluntary Control of Trade Fair and Exhibition Statistics (Gesellschaft zur Freiwilligen Kontrolle von Messe- und Seite Ausstellungszahlen, FKM) and are subject to checking by an auditor (www.fkm.de).

The next EISENWARENMESSE – International Hardware Fair Cologne is scheduled to take place from March 1 to 4, 2020.