Engineered timber and composite materials are often ‘out of sight, out of mind’ as far as hardware retailers are concerned, writes JOHN POWER. But this important sector could have a major impact on traditional hardware-based timber sales in the future. 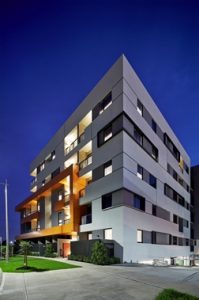 Of all the categories of building materials, timber products are the most enigmatic and skittish. That might sound like an ‘odd’ appraisal of one of the largest traditional product sectors in our industry, but timber has always attracted nervousness based on its vulnerability to political and environmental interests, swiftly imposed regulations affecting supply (imports represent 30 per cent of total consumption), and competition from new composite materials.
If we consider recently released statistical data1 from well-known industry analyst Geoff Dart, there are prima facie grounds for optimism as far as hardware-distributed timber is concerned:

However, if we dig a little deeper into these statistics, some powerful alarm bells start to ring. I can identify the following potential long-range hazards to hardware retailers’ timber departments:

Let’s discuss
engineered wood products
Engineered wood products (EWP’s) are an underestimated threat to hardware-based timber sales. At present, common EWPs like LVL (laminated veneer lumber), CLT (cross laminated timber), plywood and Glulam are expensive and rather specialised items, most commonly specified by architects for a small number of structural timber applications.
Indeed, it is estimated that only about three per cent of buildings in Australia use prefabricated ‘structural’ timber-frame construction methodologies. By contrast, half of all new buildings in Scandinavia use prefabricated timber construction, and 74 per cent in Finland. These new-generation construction methods are favoured because they (a) involve faster construction times, (b) use less labour, (c) are more environmentally friendly than concrete-based construction, and (d) present greater design flexibility. 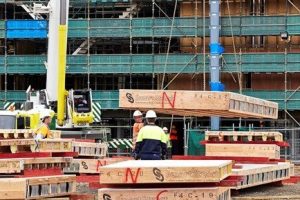 The important word here is ‘prefabrication’. While traditional timber is a raw material – supplied by a hardware retailer, for instance, and then cut to size at the construction site by skilled tradespeople – EWPs are ‘manufactured’ (and many components preassembled) to a high degree in the factory according to initial designs and sizings. In other words, top-end EWPs have more in common with prefabricated steel construction than timber milling. Again, the key point here is that developers love the cost savings associated with EWP prefabricated construction, which effectively replaces ‘raw construction’ with ‘prefabricated assembly’. Developers like Lend Lease and Australand Property Group are already huge fans of EWP construction, and are setting an example that others are sure to follow.
But surely, you might say, timber-framed construction – currently limited to three-storey developments by the NCC (National Construction Code) – is ‘small cheese’ in the grand context of all constructions nationally.
Perhaps, but in a striking new development the peak body Forest & Wood Products Australia (FWPA) has just lodged an application to amend the Building Code of Australia to allow timber construction systems to be used for Class 2 (apartments), Class 3 (hotels) and Class 5 (office) buildings up to 25 metres (i.e. up to EIGHT storeys) in height. In 2014, some 54 per cent of all new apartment constructions, i.e. 17,039 apartments nationally, were in buildings below nine storeys in height, which demonstrates the massive potential market for EWP construction in the future.2
If this FWPA application is successful and implemented according to plan in May 2016, then Australia’s building scene may be set for a revolution in the way large-scale projects are designed and constructed, along with suitably novel approaches to sourcing materials direct form the manufacturer.
As noted in Geoff Dart’s report, we must not forget that multi-level apartments are tipped to represent half of all dwellings in the country by 2031, which indicates a relative softening of demand for hardware-supplied base timber products for detached housing compared with multi-unit developments, regardless of the construction methodologies used. Even if hardware retailers try to forge better relationships with EWP manufacturers, the reality is that high levels of job-specific customisation and preassembly mean manufacturers will have little reason to distribute generic product via hardware channels.
The other major consequence of a rise in the use of EWPs (initially in multi-level buildings) is a ‘flow on’ effect to the detached housing sector – and that certainly would hit a raw nerve with timber wholesalers and hardware distributors. Small-scale developers of detached homes have a track record of copying best-practice techniques from the commercial and multi-unit building sectors, particularly if there are labour savings to be gained. Again, as more specialist tradespeople become qualified in EWP constructions, their expertise will inevitably trickle down to smaller-scale constructions over time, further enhancing the market for prefabricated timber systems outside retail hardware markets.

Not all doom and gloom
A ray of sunshine in the EWP/composite timber materials market, as far as retail hardware channels are concerned, relates to products for decking and landscaping. These categories of processed or alternative/recycled products are well established and have the twin advantages of long-term affordability and minimal ongoing maintenance. Composite timber decking has great potential in a variety of domestic applications, particularly in rental properties where owners seek no-fuss, low-maintenance installations. Other advantages include features like no-slip grip, mildew and fungus resistance, low flammability, as well as scratch resistance.  The other major appeal of synthetic or composite decking is its consistency, which allows homeowners to stagger projects over time while still having access to reliably coherent finishes.
Major retailers like Bunnings, Mitre 10, Masters, Home Timber and Hardware Group and others, all offer healthy selections of composite or PVC decking materials, which demonstrates an undoubted mainstream acceptance of the category.
As higher-density dwelling construction drifts towards multi-unit developments and away from detached housing, small-scale home improvements and renovations of existing dwellings are sure to become more highly prized within the retail hardware scene. Innovations in the composite decking field, of course, should therefore be followed extremely closely.