Just four months ago, former general manager of Murphy’s Mitre 10, Gary Jenkins, left the Monbulk store he managed for over seven years and bought his own hardware store with his wife Sarah, in Melbourne’s far-east.

Gary said he has dreamed of owning his own store since he was a small boy, and in August this year, that dream came true after he purchased Boyles Hardware, in Trafalgar, 120 kilometres east of Melbourne. The store was quickly re-named Trafalgar True Value, under the Mitre 10 banner.
“When we came to the decision of bannering the store, I thought given my relationship and full understanding of the Mitre 10 model, the Mitre 10 banner would best fit my business. Mitre 10 has a strong independent standing in the industry,” Gary said.
Boasting a long family history, the store has successfully served the local community for over 85 years. After former owner, Malcolm Boyles passed away just four years ago, his wife Elaine and son Scott took over the business. They managed the store for four years before Gary found the store and decided to take it on. 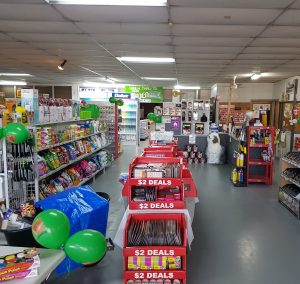 Major refurbishments
To fit in with the core range developed by Mitre 10, Sarah and Gary, along with former owner Scott Boyles and former employee, Geoff Bentley (who now works alongside Gary) transformed the store and designed it specifically to best fit the store’s size, while catering to the local community.
Initial refurbishments at the store included changes to the garden, outdoor living and hardware core range and ensuring the store maintained its strong trade focus.
“When we began to refurbish the store, we ripped up all of the carpet inside and painted the floor and the walls. We then went on to develop a new garden and outdoor living area. So initially there was all potting mix where we have now put the outdoor furniture. We moved all the smaller bagged products under 20 kilos inside and the bulk products outside, so customers have more options to look at products inside the store,” Gary said.
“We have also completely refurbished the garden, outdoor and hardware departments, while completing a lot of relays to bring the stock up into Mitre 10’s core range,” he said.
Gary also pointed out that the amalgamation of the Mitre 10/HTHG will positively affect his business because they are both strong independent brands.
“We can only get stronger and compete with the corporates. The buying power will also be stronger,” he said.
Pic cap – (painting panels) and/or (internal floor being painted) – Initial refurbishments at the store included ripping up the carpet inside and painting the floor and the walls.

Focus on trade
Trade remains fairly big in Trafalgar and the Baw Baw Shire, according to Gary, who said that the store’s trade area attributes to 60 per cent of the store’s overall sales.
Over the past three years the store’s sales have grown through its trade area and still has room for growth. Gary said although it is great to have a lot of trade sales at the store, the downside of this is that when the trade department is quiet, the store is also quiet.
Over the next 12 months, Gary said he plans to grow and market the store by specifically growing the trade and produce departments, including the pet and stock feed department. This also means staff will need to be sufficiently trained in product knowledge of stock feed as the department grows and evolves.
“There’s a huge market for pet and stock feed in Trafalgar because it is all farm land up this way. As a part of the range we sold pet and produce at Murphy’s Mitre 10 as well, so I already have a bit of knowledge in this area. Through the Mitre 10 group we have the ability to grow our pet and produce department because there are so many lines,” Gary said.
“Given that we have relayed the internal hardware departments, we are looking at developing the outdoor and produce departments, including furniture and outdoor living, as this department was not at the store at all when we took over. The store also did not have barbecues or furniture for many years, so hopefully with the catalogue that we have coming out in December, we can drum up some new business and get customers in to have a look at the new range in-store,” he said.

Pic cap – (Garden area 1) and/or (Outdoor living and garden area) – The store aims to drum up additional sales through its outdoor furniture and garden departments.
While the garden and trade departments remain particularly popular at the store, plumbing is another department which continues to grow in leaps and bounds due to a lot of old fittings located in houses throughout the local area.
“What we are trying to do is get the Mitre 10 core range right and a lot of that is in plumbing. The product demand from customers remains quite old school, compared to the store that I used to manage. The aim was to have set up departments so customers knew where to find products easily.”
“As long as we deliver on personal service, which was a major asset of the Boyles business, we should do fine because a lot of our customers have already said that they come here so they can receive one on one service from us,” he said.

Family run business
Gary believes that because the store is being run as a family business, it will be easy to develop personal relationships with customers and combine this with Mitre 10’s strong buying power, as well as Gary and Sarah’s extensive retail knowledge. Having Scott still involved in the business meant that the customers still had a strong connection with the customers.
Gary has always thrived in the hardware industry, working for Bowens and Hudson’s as well as the wholesale industry before he was trade manager and general manager of Monbulk Mitre 10. Sarah has worked in retail for 12 years, including the Just Jeans Group, also a POS company.
“When we bought the business Sarah was working for Smiggle but gave that up to spend more time building the business,” Gary said.

Local demographics and competitors
With the 2000 square metre store being the only hardware store located on the highway, Gary said this is a significant advantage over competitors who are located away from the town’s main highway. Competitors include a Home Timber and Hardware store in Moe, while a Dahlsen’s and Bunnings is based in Warragul, which is about 20 minutes’ drive from the store.
Gary said the local area is also growing rapidly and although Trafalgar currently has a population of 5000, this number grows on a weekly basis.
“The growth corridor of Victoria currently is from Pakenham to Trafalgar, with so much more of the population moving from Melbourne to the Gippsland area. This is great news for us,” Gary said.
Gary is planning to re-locate his family closer to the business in the new year and continue to grow and evolve the business so his two young children, Kyen and Piper may work in the business one day too.
Pic cap – (Gary’s son Kyen) – Gary’s son Kyen already likes to help out at the store.