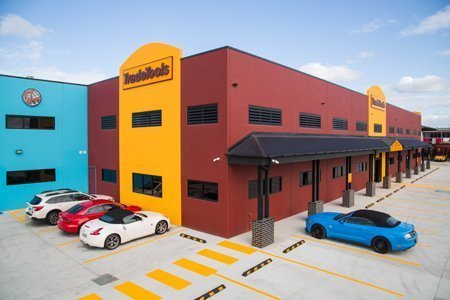 TradeTools Archerfield is like no other specialty tool store in Australia. After moving from two locations in 1990 and again in 1999, TradeTools Director, Greg Ford said, this third and final move will certainly raise eyebrows in the national and international hardware industry.

Officially opened on April 30, TradeTools Archerfield is the one and only TradeTools store that boasts an attached large two-story diner that doubles as a museum as well.

“It is quite an amazing place, and it is a bit of a folly of mine, but it is something I have wanted to do for a long time. We put the museum together because, over the years, we have collected so many antique tools, with some of them aged as far back as the Napoleonic wars. I have so many collectibles as my father was in business with me years ago, and we have many tools that he used to sell as a tool rep when I was as a kid back in the 1950s. A lot of other stuff came from people we have known or employed, who have left their entire collections to us when they have passed away,” Greg said.

“With such a large collection of valuable antique tools, I thought it was a shame to not have it on display. Therefore, I thought the best thing to do was build a museum, particularly considering we are so well known throughout Queensland for being a substantial tool company. So we have put all of our choice collectible tool products on display and some of them are likely the only ones left in the world,” he said.

The large collection of tools will be displayed alongside a substantial collection of vintage motorbikes, vintage cars, as well as collectible guitars and banjos.

“We also have a large a collection of vintage motorcycles and cars so we thought we might as well put those in there too. I have also collected old guitars and banjos for about 50 years so these will also feature in the museum as well. They all represent extreme dedication and fine workmanship from years gone by. Basically the museum features everything we have collected over the last 50 or so years,” Greg said. 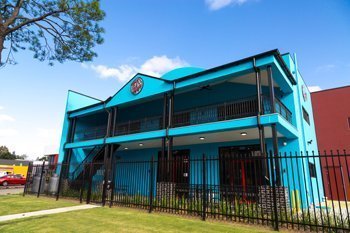 The size of the Archerfield site is an impressive 4500 square metres, with the building covering approximately half of the site. Located alongside the store is the TT Diner, which has been built over two levels and modelled from the style of a typical Queensland country pub, with large verandas and balustrades across the front. While the main store is painted in TradeTools branded maroon, the TT Diner is painted turquoise, Greg’s favourite colour.

“People have told me they have flown over the diner and can clearly see it from the air, it is that bright!” he said.

While the new site is located just one kilometre from the former location, the new building is substantially bigger and better than the former site, featuring over 50 carparks and having 20 full-time staff.

Greg said that, “we set out to build the world’s very best tool store, and I really now think that we have managed just that!”

“We also have two marketing girls called the ‘TT Girls’ who go to TradeTools’ carparks and do trade breakfasts etc., and they will be helping at the TT Diner also. TradeTools Archerfield is set to be one of the busiest tool stores anywhere in Australia,” he said. 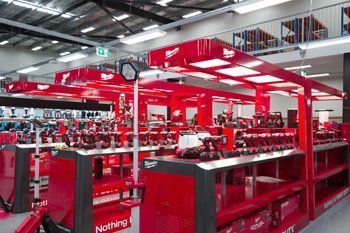 TradeTools stocks all of the major brands and is one of the largest Milwaukee dealers and Makita dealers in Queensland, according to Greg. Over 40 per cent of TradeTools’ products are also exclusive product lines.

“We have had our own brand, Renegade Industrial, since 1989, which covers a range of power tools, air tools and specialised equipment. Last financial year alone we sold 350 containers of just our own branded products, with a turnover approaching $110 million. We also manufacture a large range of our own air compressors plus a range of petrol powered pressure cleaners right here in Queensland,” he said.

Each TradeTools store also boasts full repair facilities, as Greg believes it is not a proper tool store unless it has a workshop that covers all warranties and services all products sold.

“TradeTools are also the warranty agents for everything we sell so, in most cases, we can decide and act within a very short space of time should a customer have a problem with a product they buy. We absolutely believe in genuine, ethical, old fashioned service combined with proper in-depth knowledge covering the full breadth of our range,” Greg said.

“When our customers buy from us, they are mainly buying directly from the importer; no middleman, no expensive internal freight, no franchisor fees and no expensive interstate freight charges. We just ship it around our own stores in our own trucks, every day, from our central Ormeau warehouse,” he said.

“Quite simply, it is a very hard business model to try and compete with, and figures don’t lie,” Greg said. Over the last 18 years, TradeTools has also gone from primarily leasing its premises to owning almost all of its purpose-built tool stores, which has been a major goal since 2000.

“If we make a profit, it stays here in the form of new buildings, local investment, more stores and more local employment. We also now have 35 shareholders in the business. I am now 66 years old and I thought I would like to retire someday so, over the years I have handed parts of my company away to my long-term staff members. There are many staff members who have been here more than 10 years, and 35 of those have been given shares in the company, however I am still the major shareholder,” he said.

With competitors such as Total Tools and Bunnings, Greg believes being one of the original tool companies in Australia ensures the company remains in good stead against its competitors.

“In most cases we own our premises outright, meaning we hardly pay any rent. We have no overdraft and we do not owe anyone money. This means that when the next downturn comes, as it always does, the only real overhead for us is wages. And this is an expense that we have full control over, so our old fashioned business model is as unbreakable as it can ever be.”

“We go back four decades, when my Dad, Len, and I started a company called Glenford’s. We sold that business in the mid 1980’s, when Dad retired and I then started TradeTools in 1987. My father had been in the industry since 1952, which was the year I was born, so we have been in this industry a very long time,” Greg said.

TradeTools Managing Director, Jeremy Stewart, has also worked in the company since he was just a child, and Jeremy’s father Rick, now retired, is one of Greg’s former business partners.

TradeTools is also a member of the Tool Masters Group, which includes five industrial tool companies including TradeTools, Sydney Tools, Adelaide Tools, Nubco in Tasmania and Toolmart in WA. Tool Masters represents a substantial block of the industrial tool market across Australia and is gaining in strength as the years unfold.

“They are all highly experienced family businesses that have been in business for decades; in-fact Adelaide Tools started way back in the 1940s. We basically all have our own key states, but we do share information, some import lines and marketing initiatives etc,” he said.

“TradeTools is nowhere near the longest established of these five Tool Master companies, but I believe we have well over 1000 years of industry experience across our staff in just our company alone,” Greg said. 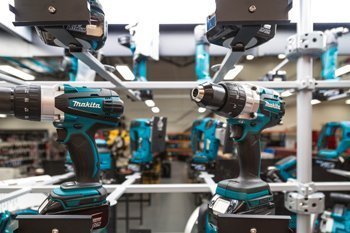 Over 97 per cent of the TradeTools’ customer base are trade or business users, with almost everything sold in-store used by its customers to earn their living.

“We do have about three per cent home user customers, but a lot of these customers are actually retired or former tradesmen. We have over twice as much gear and a lot more exclusive products than most other competing tool stores. For instance, almost 90 per cent of what we have is not stocked by hardware stores as we really are a specialty industrial tool company,” Greg said.

Now with 17 stores in total, 16 in Queensland and one in New South Wales, TradeTools will soon cover from Cairns to Tweed Heads, with its 18th large new Cairns store scheduled to open in the next few months. All of the stores boast an average size of between 1000 and 2000 square metres, however Greg says TradeTools only opens stores where they believe there is a genuine need for what they sell.

“In saying this, a lot of what we sell you just can’t buy anywhere else as it is our own exclusive branded product,” he said.

Future plans…
The company’s loose business plan has always been to double its turnover every ten years, and while TradeTools has achieved this so far, Greg is still not sure if they can do it again over the next decade.

“The former Archerfield store was already one of the highest turnover tool stores in Australia, so it is only going to get better when we move,” he said.

Leading up to opening day, many specialist groups were invited to visit the store before it opened, including car and motorcycle clubs, with plenty of photos posted online to boost the company’s strong online presence.

“We will be doing a ‘soft opening’ because we are not out there waving flags trying to impress an army of weekend warriors. Tradesman are basically down to earth; you can’t impress them that much by too much hype. You stock the right product, do the job properly, and back up everything you sell, and they will always come back to you. It really is as simple as that,” he said.