HBT’s yearly business workshops and tradeshow were recently held at the Royal Pines Resort on the Gold Coast from September 20 to 21, with members and suppliers gathering to share ideas alongside several new steering committees under the HBT, ITT (Industrial & Tool Traders) and Timber categories.

Workshops were held in a rotating format of small groups, with coinciding steering groups attending each workshop to assist members with any pressing questions or issues. Key suppliers also presented at each workshop.

An impressive trade show was also held in a speed dating style on the final day of the event, with 32 key suppliers invited to speak to members on exciting business prospects. 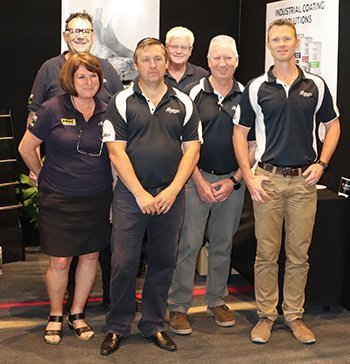 HBT Chief Executive Officer, Greg Benstead, said the speed dating structure gave members the opportunity to speak to suppliers that they would not usually deal with and see what they offer, as well as broaden horizons.

HBT’s new team members
A significant part of the event saw the introduction of several new HBT team members, primarily in a buying team role. The three new members, Kevin Marshall, Mark Sampson and Valentyna Skyba have extensive experience in buying roles, with both Kevin and Mark boasting many years’ experience in the hardware industry specifically. Just a few months ago, HBT’s new General Manager of Buying, Jody Vella, came on board to head up the group’s buying and negotiating strategy. HBT also introduced new team member, Steve Sanders, who will work with members specifically and whose role includes checking in on existing members as well as discussing potential HBT memberships with local independents.

During his opening address, Mr Benstead, said a primary objective for HBT in the next few months is to develop a more professional approach to its buying.
“This does not mean corporatising the group in any way. It just means we have realised that with 500 suppliers and 706 members, it is a lot of people we are looking after. So we have put on some new people and upgraded our buying team.” 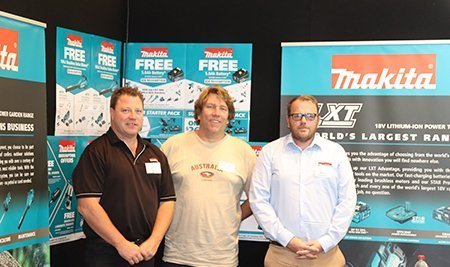 “Jody Vella, Mark, Kevin and Val are straight out of supplier land and retail as well. This will make a big difference and ensure we are making the right decisions and getting more sales through suppliers. Not only are we up-sourcing our buying team, but our member area as well and we have picked up Steve Sanders to work with us on this in SA particularly,” Mr Benstead said.

Open discussion
During his opening address, Mr Benstead also reiterated to members the importance of participating in open discussions, particularly during the rotational workshops. The workshops were formatted in smaller groups so the new steering committees in hardware and building supplies, as well as industrial and timber, could openly communicate with members in an intimate environment.

“This is not a conference. This is more of a workshop. We really want to make this session a two way conversation and get a lot of feedback from you guys in regards to the direction we are going, improvements we need to make and opportunities that we have got out there as a buying group, that can make things more profitable for everyone.” 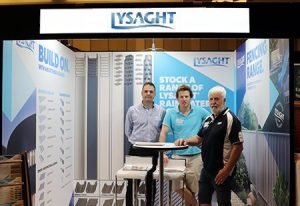 Market update
Before the workshops commenced, Mr Benstead briefly summarised the state of the market, highlighting Bunnings’ recent strategy to extend its categories, particularly in homewares.
“When you walk into a Bunnings store these days it is looking more like Kmart. There are a lot of categories they are into that is not traditional hardware. Growing their business is what they are about, with gardening another area that seems to be getting bigger and bigger all the time,” Mr Benstead said.

“They continue to grow their store numbers and one of the most concerning aspects, from our perspective, is the smaller concept stores they are rolling out and trying to get into locations that they have not traditionally been in. Therefore, it is a concern to the independent retailers because the last thing you want to do is have Bunnings come to town and a lot of you have experienced this already. When it comes to Bunnings’ smaller concept stores, people see Bunnings as a bigger format. To do it in a smaller format becomes a problem for them because it is hard for them to come to the market with this effectively.”

“The negative impact on smaller stores occurs to those that are less agile. We as independents need to be agile. We have got to find the weaknesses in our competitors and ask ‘what are we strong at’, including delivering service from someone who knows the game and knows their business. So that is an opportunity for us,” he said.

Mr Benstead also pointed out that Bunnings is attempting to coerce its trade customers by running trade days, however despite this, its trade stores continue to struggle.

“Bunnings trade stores are not a separate business as these stores are just taking business from their existing Bunnings stores in the area and moving it to their trade stores. So ultimately it does not grow their business, just adds costs because they put another store in the market,” he said.

“The other thing Bunnings is doing is pushing suppliers for exclusivity. The opportunity is for suppliers to separate their brands between a Bunnings brand and then have another brand, which is exclusive to everyone but Bunnings. So there are opportunities for us to be a part of these exclusive independent brands. In every problem there is an opportunity.” 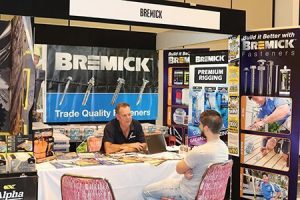 “Suppliers have rolled over some of their brands to Bunnings which is an important issue. Another component is there are many suppliers who are not with Bunnings who want to grow with us, so there are opportunities for us in those areas. But finding the cheapest way to market for our suppliers is also a critical component because our suppliers are our best advocates to our members. We are the cheapest way to get to market for those guys and we are making sure we keep it that way,” Mr Benstead said.

Looking ahead Mr Benstead said the need to continually improve rebates for members and sales for suppliers is an ongoing challenge.

Workshops – Hardware session
At the commencement of the hardware workshop, HBT’s Gavin Keane reported to members that HBT continues to experience, “very good growth year on year, which is great considering it is such a diversified group.”

Both the insulation and paint categories were highlighted during the workshop, with Mr Keane pointing out that insulation remains a consistent category of growth for HBT.

“Insulation remains a very good category for us, with our major supplier, CSR Bradford, also experiencing growth during this time,” Mr Keane said.
CSR Bradford National Key Account Manager for HBT, Neville Taylor, went onto to present to members suggesting they continue to use CSR’s new ‘Black’ product, “which will be the biggest thing for us moving forward, as well as recommend acoustic insulation when a customer is building.” 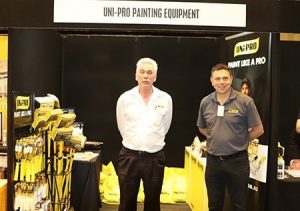 “We know when you lose a customer who buys an insulation product with your competitor down the road, you also lose the timber sales etc. that go with it. By offering a quality product you keep your customers in the door,” Mr Taylor said.

The paint category was also touched on during the hardware workshop, with Haymes boasting a growth of 66 per cent with HBT in the last 12 months, and employing 20 new people over the last 24 months.

“The Haymes family is committed to remaining non-corporate and solely supporting the independents. It is important to understand our customer, retain them and grow revenue, as well as protect their own business and market, while also looking at promotional programs exclusive to HBT. Haymes is also looking at becoming a single source solution for the consumer, expanding now in auto, industrial, protective coatings, timber, wood-care, render, paving and roofing, so we are a one stop shop for your customers,” Mr Dolegowski said.

“I will visit potential members in the area and discuss what HBT offers to independents. I am also here for any members with issues and problems with suppliers or in-store, and I will also call in on current members to make sure they have all the information and help they need from head office,” Mr Sanders said. 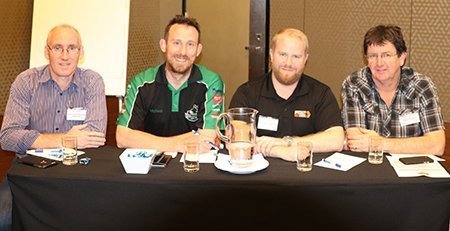 During the workshop, Mr LoRicco was also happy to report that HBT now has the finances it did not have before to invest back into the business and grow the team.

“This includes additional buyers who will be working with Jody to better the deals for the group by negotiating with the suppliers and getting the better buying prices. Also channelling members to those suppliers who are interested in giving the group a better deal,” Mr LoRicco said.

Workshops – Industrial Tools
Now with 172 stores in the ITT (Industrial & Tools Traders) group with 632 stores in HBT that buy into these sub categories, Mr Benstead said the ITT category was not about growing a particular brand, but about growing the entire category.

He also reminded ITT members that it was particularly important to stay in touch with the steering groups because often, “they have encountered the same problem as you and will have the answer to any of your concerns.”

Workshops – Timber session
The ‘Timber’ workshop saw HBT General Manager, Mike LoRicco take members through several timbers worth considering in the year ahead, as well as reiterating the top suppliers to HBT within the timber industry, deal improvements, and several collated buys. 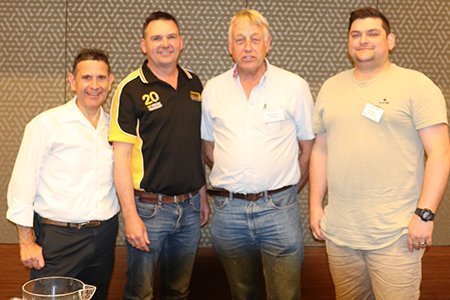 Workshop conclusion
In wrapping up the workshops, Makita’s National Key Account Manager, Shane McMullen presented to members, educating them on how to buy better through Makita’s trading terms.

‘Detail Retail’s’ Retail Designer, Melissa Guthrie also presented several impressive case studies on physical retail spaces that have been transformed through the refit and design company, including full and partial retrofit, relays and cosmetic changes. The transformations are specifically designed to change the perception of a business, while increasing stock turn, and competing in the physical and online environments. Mr Benstead also wrapped up the busy day of discussions by reporting on the development of HBT’s new EDI currently being trialled through both members and suppliers.

“Ultimately what we are trying to do is increase rebates for everyone and this is a way to do this. In essence, it is also a time to refocus and change the way we deal with suppliers via invoices,” he said. 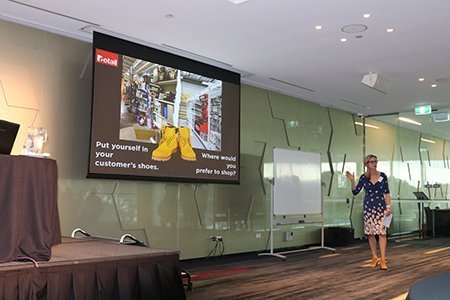 “Suppliers can now send through invoices via the EDI, and this also allows HBT to harvest the information, including sales data by category for different suppliers. This is powerful information from a buying team perspective, including what is trending and which areas may be affected by certain events, such as the drought affected areas. We can also use this to source better rebates. Once it is up and running the advantages to everyone will be significant,” Mr Benstead said.

The workshops wrapped up with casual welcome drinks held outdoors at the RACV Royal Pines Resort, with both suppliers and members enjoying an informal chat before the extensive tradeshow commenced the following morning.