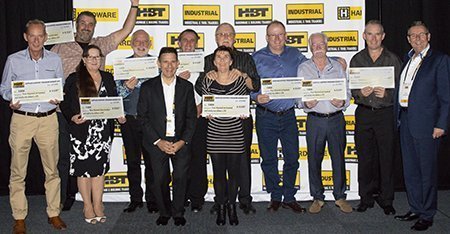 With a record number of stores and exhibitors in attendance, HBT’s 2018 national conference, held at the Adelaide Convention Centre from May 2 to 4, held many firsts for the group, including the official introduction of HBT’s new Chief Executive Officer, Greg Benstead.

‘The power of true independence’ was a theme reiterated throughout the three-day conference, and set the mood during the business sessions, trade show and gala dinner, which saw 1032 in attendance including 191 exhibitor booths and 260 stores.

Members’ sessions kicked off proceedings, which included the Tim Starkey Memorial Awards, in honour of HBT’s late Group Manager. Commonwealth, Olympic and World Champion Cyclist, Anna Meares, also delivered an inspirational and emotionally moving presentation during members’ sessions, captivating delegates with her story on working through adversity to achieve success, a story synonymous with HBT members.
It was also on the first day of the conference that newly appointed CEO, Greg Benstead delivered his first official presentation to members and suppliers, highlighting his vision for HBT, industry insights and exciting new initiatives, he has planned for the group.

“After returning home from the 2017 Sydney conference, group executives saw themselves at the start of a new adventure, with so much opportunity to improve and grow the group – for positive change and modernisation of our processes and interactions. We also felt an urgency to be ready and prepared for the challenges ahead. As we pondered our future we realised we needed more help, from someone with a complementary yet extended skill set to our own,” Mr Coates said.

He said Mr Benstead’s experience is extensive including working at Woolworths for 16 years, boasting roles in area management, marketing, merchandising and supplier negotiation. Proceeding roles included Director of Retail Operations at Sydney Airport and COO with an international retail organisation. His most recent role was with Metcash, where he was responsible for IGA supermarkets.

“He also has extensive experience working with independent business owners working in a buying group style of operation. He shows empathy for our members as well as displaying a thorough understanding of our suppliers’ challenges as our industry evolves,” Mr Coates said. 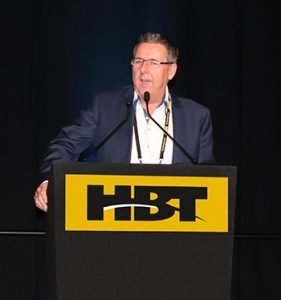 New CEO delivers powerful message
With the flourishing HBT group now boasting 685 member stores and 497 suppliers, Mr Benstead said his plan for the group moving forward is “evolution not revolution”, and to ensure HBT is the best little buying group in Australia.

“When I joined my instructions were quite clear, with three things that I had to focus on: increase rebates, reduce the cost of goods, increase the volume for our suppliers and assist all of our members to thrive. Independence by definition means ‘free from outside control’, not subject to another one’s authority, which is why everything we do we put there as an option and you guys make the decision,” Mr Benstead said.

“The ‘power of true independence’ is the theme of this year’s conference and highlights what makes our membership so unique and how powerful we can be when we act as one. I have also found that independent business owners are the most straight forward, motivated, community minded and fair of all retailers, so I was excited to join HBT. We are the group that can deliver an honest, transparent business, that allows business owners to compete and decide their own destiny,” he said.

Mr Benstead also highlighted HBT’s prime directive with a focus to give member stores and suppliers the tools and support they need to survive and thrive, because he believes family businesses make communities stronger.

“I know that in retail every year seems harder than the last, with more competitors, customers being harder to reach and expecting more, ranges that are larger. My goal is to continue to reach larger rebates for members and a great volume for suppliers that work with us,” he said. 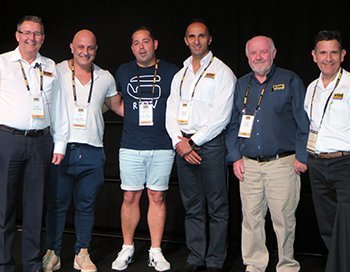 With HBT’s membership up seven per cent on last year, primarily with 18 stores coming on board from NSW/ACT, HBT’s H Hardware and ITT brands also continue to grow. 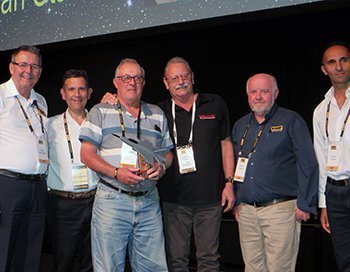 When addressing the group, Mr Benstead also suggested there is an option for a brand to be developed in the industrial tool area as well as in timber and building in the future.

“True independence means you decide. What your store looks like, what products you range, how you market your business, what suppliers you use, where you source your products. In saying this, HBT is a buying group but we need to give you the right options as well so you can continue to grow and prosper.” 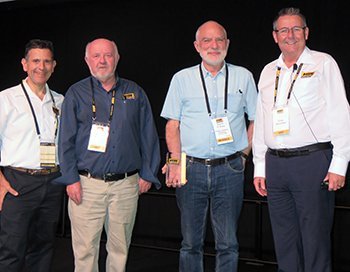 Mr Benstead highlighted the need for better rebates for members, reiterating that deals will only become better if more volume is pushed through a supplier.

“Currently we have a small buying team and they do an amazing job. But we do want to focus on that a little bit more so Steve (Fatileh) looks after all of our hardware and building suppliers, Gavin (Keane) the industrial tool area, while Mike (LoRicco) is heavily involved in timber, which is also a critical area.” 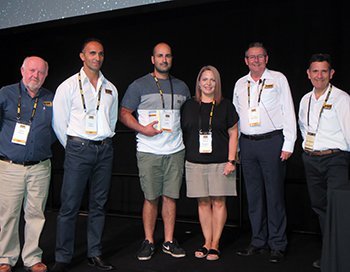 Increased support and communication to all members is also a critical focus moving forward, which is why a new team structure will be put in place so every member will have a key point of contact, Mr Benstead said.

“Each state will be allocated a team member and we will also refine the way members receive communication, for example through a new closed Facebook group which is for members only. We have great plans to enhance communication throughout the group,” he said.

HBT General Manager, Mike LoRicco, also spoke on the use of steering committees to ensure ongoing effective communication with suppliers, as well as assisting members on improving their bottom line by transitioning to suppliers that continually support HBT.

“We will also be implementing new steering groups for ITT, hardware, building and timber, with experts in these fields dealing specifically with suppliers in these categories and passing the right information onto members. HBT executive steering committees will also deal with any member and supplier conflicts,” Mr LoRicco said. 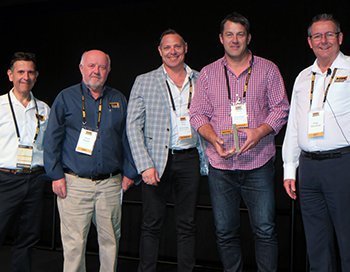 When looking at Bunnings, Mr Benstead said the UK investment has failed, with over $900 million already written off in the UK business.

“I believe Europe, and the pressure on Wesfarmers, will put more pressure on suppliers and margins to raise profitability. This is a good time for us in some ways because they will rationalise ranges to drive profits; remembering that Wesfarmers are divesting of Coles because they believe it is a mature business. What they do see is Bunnings will keep growing. However, the warehouse growth is slowing,” Mr Benstead said. 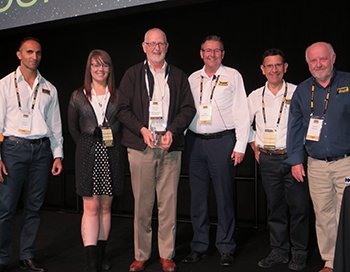 “Fit, innovative and recreated businesses will continue to succeed. We have already witnessed this in HBT in the last year where we have put on 80 new stores and lost about 30. I am also confident H Hardware will continue to make an impact and grow with 50 H Hardware stores by the year’s end being a reality,” he said.

A membership update, action points for the H Hardware committee-planning meeting, marketing plan, as well as progression of new H Hardware stores and H Hardware products were also presented during the official H Hardware meeting, with a number of potential H members in attendance. Presentations from Sympac, Phillips Lighting on boosting the category also took place at the H Hardware meeting, along with a presentation from Tilbury HT Australia, one of the largest wheelbarrow and tool cart manufacturers in the world. 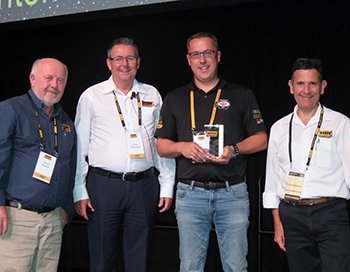 An ‘on the couch segment’ was also held, where members heard about the processes of transitioning to H Hardware from newly transitioned stores. 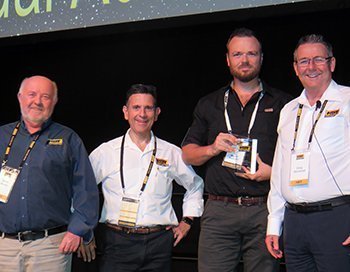 IT update
HBT has also committed to growing its members’ businesses through web platforms. This will see a dedicated team delivering improved offerings like websites and merchandising consults that members can use to not only lower their costs but also improve rebates and business profitability, Mr Benstead said.

“For a little over a year the company has been in the major refurbishment of its information systems and with the spectacular growth over the last few years, systems have not been kept up to date. Moving forward we want to ensure flexibility to improve reporting from suppliers, streamline processing, collect data that will help us grow and capture rebates from members to suppliers electronically,” Mr Benstead said. “This will lessen admin and ensure more streamlined information on category volumes which will see all volume rebates are managed in real time, as well as category growth or decline.”
CEO of VTH (Virtual Timber and Hardware), Justin Newman, then presented HBT’s product directory to members, explaining what was being done to develop it and bring the directory on board. He reiterated the importance of every supplier’s involvement in the directory and that members remain aware that their businesses are still very much about data.

“Profit Maximiser has been built to maximise your margin, while removing the guess work. With Profit Maximiser you can test new strategies, simulate and compare different outcomes before implementing them,” he said.

HBT awards
A highlight of the conference was of course the Tim Starkey Memorial Awards, with winners announced during the members’ sessions. 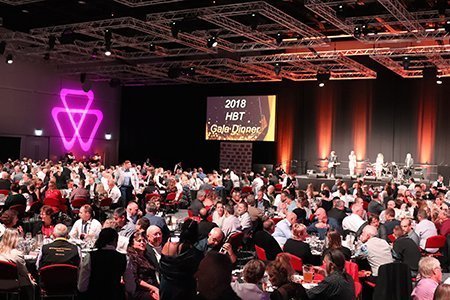 A key supplier event with a difference, was held at the Adelaide Zoo on the first night of the conference, with attendees enjoying drinks and nibbles alongside the only pair of giant pandas housed in the Southern Hemisphere. Delegates also enjoyed interacting with several nocturnal animals, including a Sugar Glider and joey Wallaby. Captivated guests were invited to pat the animals as they were given their nightly feed via a hand-fed bottle.

HBT’s bustling trade show was also successfully held over two days which saw 191 exhibitor booths and 489 exhibitor delegates, as well as a visitors’ raffle draw held with an abundance of prizes given away on the final day of the
trade show.

The 21st HBT Gala dinner was once again nothing short of spectacular, with the majority suppliers and members in attendance, particularly for the announcement of the much-anticipated 2017 Supplier Support Program, which saw over $93,000 given away in a combined prize pool. HBT CEO Greg Benstead and General Manager, Mike LoRicco both presented cheques to some very surprised winners.

Australian stand-up comedian Marty Fields also had dinner guests in hysterics, while an inspirational video presentation was displayed during the night, on the large screens flanking the stage, summarising the conference perfectly, and expertly put together by the young team at Moose Visuals.